Share
The old part of Nettuno, the true historical center of the seaside village, is located overlooking the sea. In addition to the homes of many residents, among the narrow streets and suggestive squares there are also historic buildings, such as the Baronial Palace, whose entrance is in Piazza Marconi. In ancient times, the medieval village would have represented the oldest part of Antium and the only one that survived the destruction. Walking through the village, you can see that the houses on the ground floor are much older than those on the upper floors. 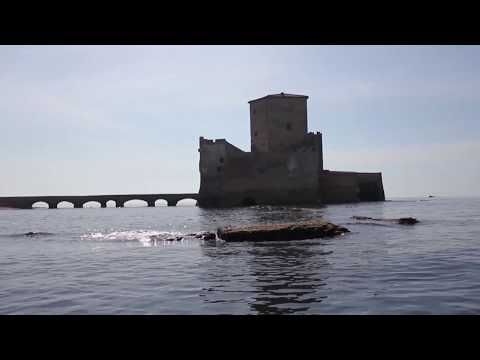 Video by The Italian Food

The borgo marinaro di Nettuno is overlooking the Tyrrhenian Sea in the Lazio Region. Represents the direct which continues in the history of the ancient city of Antium, thermal site and resort at the time of the Romans. It is situated on the border between the Agro Romano and the Agro Pontino.

Antium was founded by the peoples of Latin ethnic group at the beginning of the first millennium b.c. and later was occupied by the Volsci, who settled in the region at the beginning of the V century B.C.. Since the origins flourishing commercial center and a sailor, Antium dominated probably already in pre-Roman era, a large part of the territory of today's Neptune (according to an orientation extended approximately its territory from Capo d'Anzio, occupied by today's Anzio, to the area of the river nettunese Loricina); in the highest part of the riviera nettunese, today, Villa Borghese, there would have been the acropolis. Adjacent to the medieval village or in correspondence with the mouth of the river Loricina had to rise a port, relevant to a oppidum Caenon called, that ever since the period latin acted as naval arsenal, from the hole for the market and to deposit for the food; fundamental strategic point, it departed the pirate raids for the Mediterranean. Antium, which in the volsco period fight Rome, and it was the capital of the Volsci anziati (allocated on the tyrrhenian coast, and distinct from the Volsci ecetrani, inland); was therefore to guide other cities become volsche and taken a long belligerence that saw many episodes, among which the best known is that of Patrick Gneo Rotten Coriolano, which, in exile at the Anziati, was welcomed by the noble Attio Tullio and with him agreed the war against Rome; both were elected from city volsche commanders, their troops, and rotten Gneo, between 489 B.C. and the 488 a.C., brought the Volsci to arrive to the IV mile of the via Latina. To Antium Coriolano was then killed, while preparing to defend his work to the hole. In 484 B.C., in the territory in front of the city, the Volsci inflicted in battle a tough defeat at the Roman legions, conducted by Lucio Emilio Mamercino, forcing them to an embarrassing night getaway. In the 469 a.C., the Romans conquered and devastated the city of dinner. In 468 BC, after having lost the battle of Antium, the Anziati surrendered to the Romans, that dwelt an armed garrison in the city. Antium, which was one of the first Roman colonies (was inferred as such in the 338 a.C.), hosted, among the Romans the most eminent who built the beautiful villas by the sea shore, Cicero and Mecenate. They were mainly emperors of Giulio-Claudia Dynasty to have frequent contacts with the maritime city. Less than ten years after the death of Nerone, which took place on 9 June of the year 68, Antium however was already almost all in ruins. At the beginning of the VI century A.D. Antium, among many others, was the subject of looting and destroyed by the Gotes of Vitige, that farmers sowed death and destruction for the Lazio.

The castle of Neptune continued the history of the ancient Antium, developing on its territory as country successor. The feudal lords of Neptune were initially the accounts Tuscolo, then the Monks of Grottaferrata and Frangipane. In the IX century, the country had to endure the invasion and destruction by the Saracens. Then the inhabitants had to flee to the mountains, forests, but after that the troops of Pope Benedict VIII came and decimated the Saracens, saving probably women and children, would have laid the foundations for the formation of a new core of Neptune. The Pope then drove the accounts of Tusculum, then fortified a castle with towers and bastions - which represents the current medieval village. In 1427, after the death of Rinaldo Orsini, viceroy degli Abruzzi, Antonio Colonna became lord of Neptune and Astura thanks to Pope Martin V. In this period to Neptune were built many villas, like Villa Borghese or nice aspect, Villa Albani (today in the municipal territory of Anzio) and Torre Astura. In the sixteenth century Neptune was nothing more than a small inhabited center, surrounded by walls and towers, and at the center of which stood the church of San Giovanni. A little further ahead of the castle, there was the Sangallo fort, built at the beginning of the century, between 1501 and 1503, by Pope Alexander VI Borgia, to defend the Pontifical State from the assaults of the robbers, pirates, Arabic pirates and African countries. Opposite the fortress there was the convent of San Francesco. According to the tradition, in 1550 landed at the mouth of the river Loricina, the wooden statue of the Madonna with Child, the famous Madonna delle Grazie di Nettuno, which was transported from England to Naples for evading the persecution of Henry VIII against Catholics, following the Anglican schism. In the years 1625/26 the Pontifical State restored the village and reconstructed the bulwark of S. Rocco. In 1656 the epidemic of plague decimated more than a thousand nettunesi. It was established the Monte Frumentario, for the distribution of the grain to the poorest. Between 1697 and 1700 Pope Innocent XII commissioned the building of the New Port of Anzio, abandoning what remained of porto Neroniano. In 1700 the Pope bought by Prince Giovanni Pamphilj the whole valley around the new port, in order to allow the nettunesi to build their homes and assist them in their maritime trade. But after the inauguration of the port Innocenziano, beneficiaries, i.e. the nettunesi, were excluded from the maritime activities. In 1856, for astii interiors, the inhabitants of the area of the port, the portodanzesi, asked the cleavage from the city of Neptune; The pope agreed to this request, therefore decreed the sale in Anzio, as mentioned, approximately a third of the pre-existing territory of Neptune: 1857 is the formal date of the birth of Anzio.

In 1870 Neptune, following the fortunes of the state of the Church which was part, was definitively incorporated into the Kingdom of Italy. In 1901 the Interior Minister Giovanni Giolitti granted to the municipality of Neptune the use of its own flag: a square sheet in blue silk and verdemare, with the Blue Temple, surmounted by the God Neptune. The heart of the town was still the borgo antico, woven of lordly palaces and simple houses, interlacement of alleys and small squares, all around the Collegiate Church, dedicated to Saints John the Baptist and Evangelist. To one side of the Collegiate Church there was the Oratorio del Carmine, on the other hand the church of SS. The sacrament, in front of the baronial palace already Column, now property Borghese. From a part of the village the beautiful Palazzo dei Segneri, on the other hand the majestic Palazzo Pamphilj-Doria, also owned Borghese, with frescoes by Pier Francesco Mola, in salt and especially in the Salone delle Feste. II 20 July 1925, in Sangallo fort, Mussolini signed with the Ministers of Yugoslavia the convention of Neptune, a number of economic agreements and legal questions that concern especially the conditions of Italians in Dalmatia, as well as the relationships between Zadar and the Dalmatian Hinterland and - given the annexation of Fiume in Italy - even the regulation of the limits of territorial waters between river and Sussak, beyond that of fisheries areas of their respective competence.

An important event for the village is dated 29 November 2015, when the bishop of the Suburbicarian Diocese of Albano, Bishop Marcello Semeraro, decided to indicate how the Jubilee Church - on the occasion of the Extraordinary Jubilee of Misercordia convoked by Pope Francis - the "tent of Forgiveness", i.e. the chapel built in the exact spot where Santa Maria Goretti forgave him his aggressor Alessandro Serenelli before his death and is now an integral part of the Parish Church of Santa Barbara Virgin and Martyr.

The old part of Neptune, the real historical center of the village, is located on the sea peak. Built inside the walls with cylindrical towers. The towers are of 1300, when Neptune was under the dominion of the Orsini. In addition to the homes of many residents, among the alleys and squares suggestive there are also historical buildings such as the Palazzo Baronale, whose entrance is in Piazza Marconi; the Palazzo, a time of the Colonna family, was the symbol of the feudal power; the Palazzo Doria-Pamphilj, 1600; the collegiate church of San Giovanni Battista, of medieval origin (even if built on the ancient ruins of the probable temple of God Neptune), but completely rebuilt between 1738 and 1748. The medieval village is currently the center of night life, where the majority of pubs and clubs. In Antiquity the Medieval village would have represented the most ancient part of Antium and only survived destruction; walking around the village, you can notice that the houses on the ground floor are much more ancient than those on the upper floors.

Astura Tower
Astura Tower is a fortified coastal tower on an islet of Lazio region, in the territory of the ma...
Strada Provinciale 106b, 2626, Nettuno
Fort Sangallo
Fort Sangallo is located on the coastline of Nettuno, Lazio.
Via Antonio Gramsci, 5, Nettuno
The Temple of Juno Sospita
The main center of worship of Giunone Sospita was precisely the sanctuary of Lanuvio, near Rome.

Via dei Monasteri, 41, Subiaco (Roma)
63.38 Kilometers from Nettuno
Church of Santa Maria Assunta in Cielo
By the will of Cardinal Scipione Borghese the church entitled to Our Lady of the Assumption, was ...

Piazza del Duomo, 16, Monte Compatri (Roma)
39.63 Kilometers from Nettuno
Papal fortress
By the papal fortress of Rocca di Papa, at 753 meters of altitude, it enjoys one of the most vast...

Strada Comunale della Fortezza, , Rocca di Papa (Roma)
33.85 Kilometers from Nettuno
Fortress Abbey
The Fortress Abbey of Subiaco is located on the highest point of the village in the Lazio Region.

Via Limiti Sud, 92 – 02045, Greccio (Rieti)
19.75 Kilometers from Nettuno
Maratta Bakery
The Maratta Bakery of Subiaco, in Lazio, is famous for its typical Subiachini biscuits.

Feast of the Madonna delle Grazie

Ten seaside villages in the centre of Italy worth visiting during this summer
10 villages overlooking the sea, 10 rare pearls of our italian landscape, 10 locations that can not be missed during the year of the villages. Ok, we have a lot of pearls in Italy but today we want to show you just some we believe are really worth visiting during the summer on the central coasts of our country. 1. Our tour starts from Tuscany with the hamlet of Giglio Castello, a fraction of the Giglio Island which is located in the highe...
Continue