Share
Rocca Priora is the highest municipality of the Castelli Romani and is also the coldest town in the area. A walk in the picturesque alleys of the historic center, perched on the side of a high hill facing Monte Ceraso, offers glimpses that still have the flavor of times gone by and to those who look out from the belvedere located at the top of the town allows you to enjoy one of the panoramas more suggestive than the Castles, towards Rome and the Tiburtini, Prenestini and Ernici mountains. 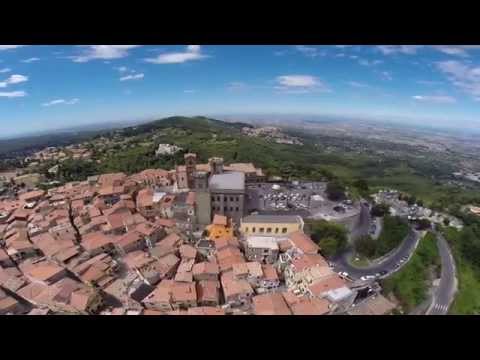 Rocca Priora is a village that until the end of the 1900s was called the Glacier of Rome, strategically located overlooking the Valle Latina still offers today a mountain atmosphere and landscapes. At a height of 768 metres a.s.l. Rocca Priora is the highest town of Castelli Romani. It is undoubtedly the coldest in the area with heavy snowfalls every year known as the snowfield of Rome, Rocca Priora owes its past fortune to ice trading.

The Santuario della Madonna della Neve remembers and witnesses the close relationship the town had with its particular climate. a walk through the picturesque alleys of the historical centre, hidden on the side of a high hill facing towards monte Ceraso, offers glimpses of what seems to be time gone by. for those looking out from the Belvedere, positioned on top of the town, it is a chance to enjoy one of the most breathtaking panorama of Castelli Romani, in the direction of rome and the Tiburtini, Prenestini and Ernici Mounts.

Rocca Priora is the coldest village of the Castelli Romani. In the place where today rises the village, many historians have recognized the site of the ancient Latin center of Corbium, that Coriolano occupied in its march on Rome (486 a.C.). The name of Rocca Priora derives from the medieval "Perjura". According to the chronicle Subiaco, in fact, at the end of the XI century stood on the top of the hill a small inhabited center, the Castrum Perjuriae Arcis, which Agapito, accounts of Tusculum, would have given to his daughter.

The fraction hill outside was born around the year 1860 by citizens from Capranica Prenestina. In the first years of the Twentieth Century there was built a school in masonry, on involvement of a group of intellectuals founders of the institution School for the peasants to the Agro Romano and Agro Pontino. Among them we find John Cena (Montanaro, 1870 - Roma, 1917), intellectual and Piedmont writer of peasant origin.

The Dinner, he moved in 1904 in Rome, he devoted himself to the education of the poor masses inaugurating a program of popular schools, coming already in 1910 to found seventy schools for farmers, including in 1912 that Colle di outside. In 1904 was also born a sodality between John Cena and Dr. Angelo Celli, the founder of the 'studies against malaria', and began to fight for the rehabilitation and literacy in the Agro Romano and the Pontine Marshes, together with a small group of scholars including Angelo Celli, Anna Celli, Duilio Cambellotti, Alessandro Marcucci and Sibilla Aleramo.

In the village of Rocca Priora, takes place in January the Feast of Sant'Antonio Abate, a feast in honor of the Patron Saint of animals during which there is the blessing of animals that parade in allegorical floats made mainly of wood decorated with fruit and bread. Very felt is also the feast of the patron saint, S. Rocco, which falls on 16 August.

Via San Silvestro, 563, Monte Compatri (Roma)
2.86 Kilometers from Rocca Priora
Papal fortress
By the papal fortress of Rocca di Papa, at 753 meters of altitude, it enjoys one of the most vast...

Via Frascati, 62, Monte Porzio Catone (Roma)
6.35 Kilometers from Rocca Priora
Villa Aldobrandini
Also known as Villa Belvedere, is one of the most important historic residences of Frascati, both...

Via Cardinale Guglielmo Massaia, 18, Frascati (Roma)
6.68 Kilometers from Rocca Priora
Abbey of San Nilo
The Abbey, also known with the name of Santa Maria di Grottaferrata and consecrated in 1024 by th...

Via dei Monasteri, 41, Subiaco (Roma)
31.89 Kilometers from Rocca Priora
The Castle of Santa Severa
Castle Santa Severa, is one of the most suggestive places of Lazio, near Rome.

Via del Castello, Santa Marinella (Roma)
71.12 Kilometers from Rocca Priora
The Convent and Pinacoteca of San Silvestro
The Convent of the Carmelite Fathers is placed outside of the village of Monte Compatri and const...

Via San Silvestro, 563, Monte Compatri (Roma)
2.86 Kilometers from Rocca Priora
Villa Aldobrandini
Also known as Villa Belvedere, is one of the most important historic residences of Frascati, both...

Via Cardinale Guglielmo Massaia, 18, Frascati (Roma)
6.68 Kilometers from Rocca Priora
Papal Palace
Built between 1624 and 1626 at the behest of Pope Urban VII Barberini and on a project by Carlo M...

Piazza della Libertà, Castel Gandolfo (Roma)
10.77 Kilometers from Rocca Priora
Papal fortress
By the papal fortress of Rocca di Papa, at 753 meters of altitude, it enjoys one of the most vast...