Share
Sant’Agata Feltria, on the border between Marche and Romagna, is the home of the white truffle. In fact, every year on Sundays in October the Fair of the prized white truffle and agro-forestry-pastoral products is held. During the event not only are you tasting dishes based on truffles and mushrooms, but for lovers of craftsmanship, antiques there are many collateral initiatives that are set up for the occasion.

A look at Sant'Agata Feltria 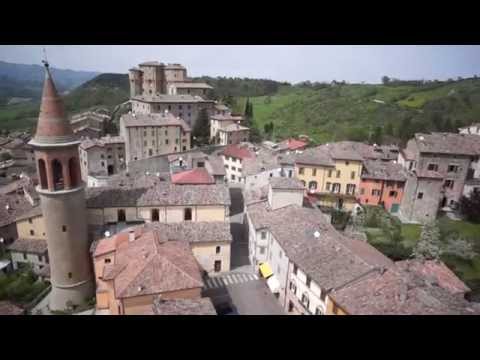 Situated on the border between Marche and Romagna, Sant'Agata Feltria (Sant'Êgta in Romagna) has ancient origins. Already inhabited by the Umbrians Sarsinati, in subsequent centuries belonged to various feuds, among which the Malatesta, the Montefeltro and then to the Fregoso that gave the name to the Rocca, built toward the X century and restored by Francesco di Giorgio Martini in 1474. In addition to the already mentioned Rocca the village retains a beautiful and well maintained historic center and various complexes of considerable historical value, including the convent and church of San Girolamo and especially the theater Angelo Mariani who, with structure entirely in wood, is one of the most ancient theaters of Italy; everything dominated from the top of Mont Hercules, by an imposing chestnut forest.
Inside the historical center develops the "path of the Fontane", a journey through the streets of the country in search of the three fountains work of modern artists and contemporaries such as the Fountain of the snail, born from an idea of the poet Tonino Guerra, made from Ravenna mosaic artist Marco cleverness and positioned in piazzale Martyrs of Hungary.

Also peripheral locations have complexes of considerable historical recall artistic, in particular Petrella Guidi with its medieval village still intact. The mighty castle, which consisted of two distinct cinte defensive walls, remained the tower. The arc of the door to all sixth suggests a construction dating back to the Romanesque period, in the church of S. Apollinare within the walls castellane venerates a miraculous image of the Virgin.

During the summer the surrounding natural environment invites to excursions on foot and on horseback. For lovers of sport and life in the open air tennis courts are available, bocciodromi, stables, lake fishing, camping areas etc. Of particular importance is the "Fair of the white truffle and the agro-sylvo-pastoral", demonstration in national character that is held annually in the Sundays of October. During this event, which has become one of the most visited and important sector in Italy, the white truffle, product characteristic of this Apennine area , is exposed, celebrated, assessed, sold, cooked and is tasted in all ways. And truffle encircle other treasures of the Apennines, mushrooms, honey, chestnuts, officinal plants, wood products of sheep farming and agriculture. The event santagatese is not only the most greedy opportunity to savor and enjoy dishes based on truffles and mushrooms, but also a great event for the lovers of the handicrafts, antiques and of the many initiatives collateral for the occasion are prepared. From some year at Sant'Agata Feltria in november you can taste the cheese in the bank of sandstone, being been reopened the ancient pits. It is the headquarters of the literary prize "The Holly".

In December Sant'Agata Feltria turns into "town of Christmas". In the environment full of charm of this medieval village you can live the Christmas atmosphere typical of the Northern European countries, between music of bagpipes, House of Santa Claus, elves, slides, reindeer and other surprises. For the occasion the local restaurants offer a special menu with "the dishes of the advent" in the historical center, traditional Christmas market with sale of typical products, decorations and statues of the Neapolitan school and Sicily, enriched by cultural events: a demonstration all focused on the suggestions of the Christmas tradition.

the Municipality is part of:
Città del tartufo
Unione Valmarecchia

Piazza Tito Maccio Plauto, Sarsina (Forli Cesena)
8.09 Kilometers from Sant'Agata Feltria
Mausoleum Of Obulacco
This is a cenotaph in form of a newsstand and pyramid-shaped spire, erected in the I century b.c....

Piazzale Antonio Gramsci, 35, Sarsina (Forli Cesena)
8.09 Kilometers from Sant'Agata Feltria
The Basilica of San Vicinio
The chapel which closes the right nave preserves the relics of San Vicinio and its thaumaturgical...

Via Cesio Sabino, 39, Sarsina (Forli Cesena)
8.16 Kilometers from Sant'Agata Feltria
Calbano
At the top of the hill, Calbano was certainly for the romans - as it probably was the first for t...