Share
San Leo is a small medieval village located on a rocky outcrop of Valmarecchia. Its historic center can be reached through a single road carved into the rock. The rich history of San Leo was a source of inspiration for the birth of various well-known cultural events and popular festivals, which bring back to life the traditions and events of the past. 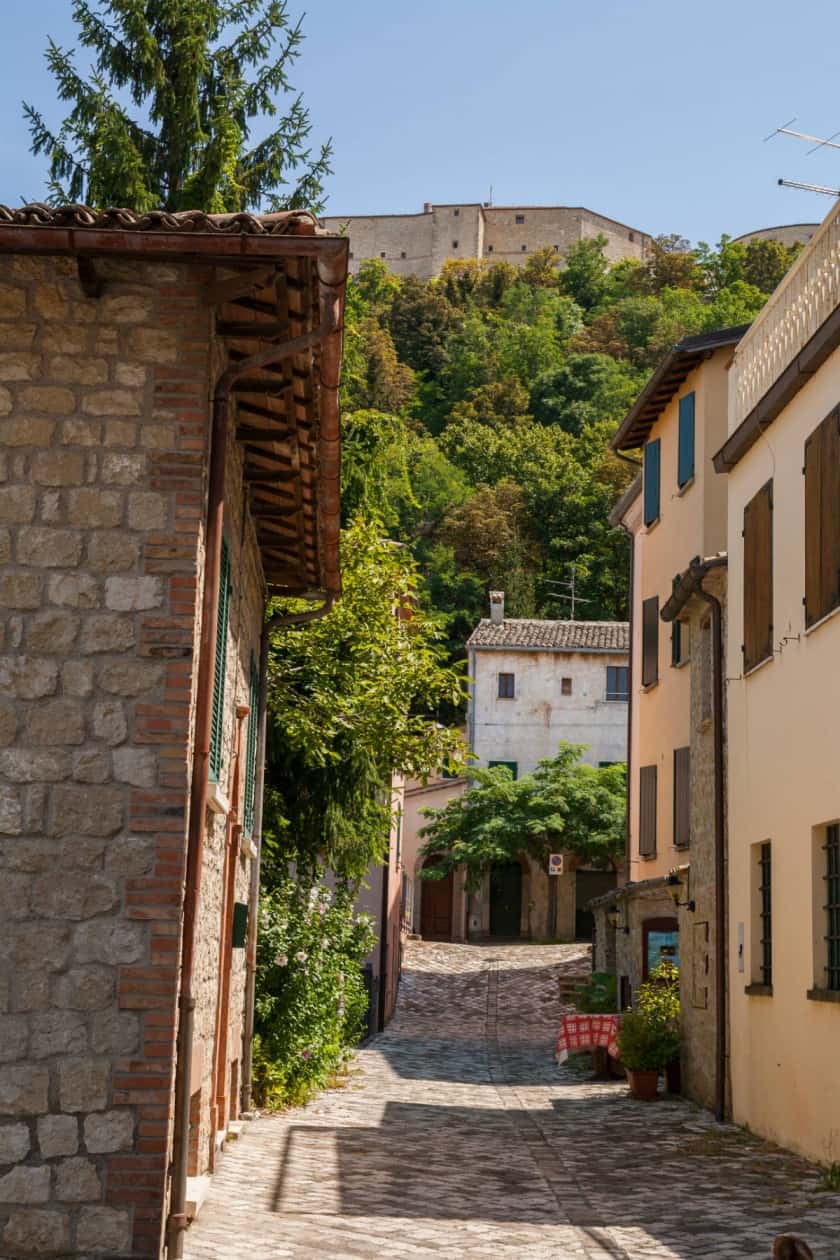 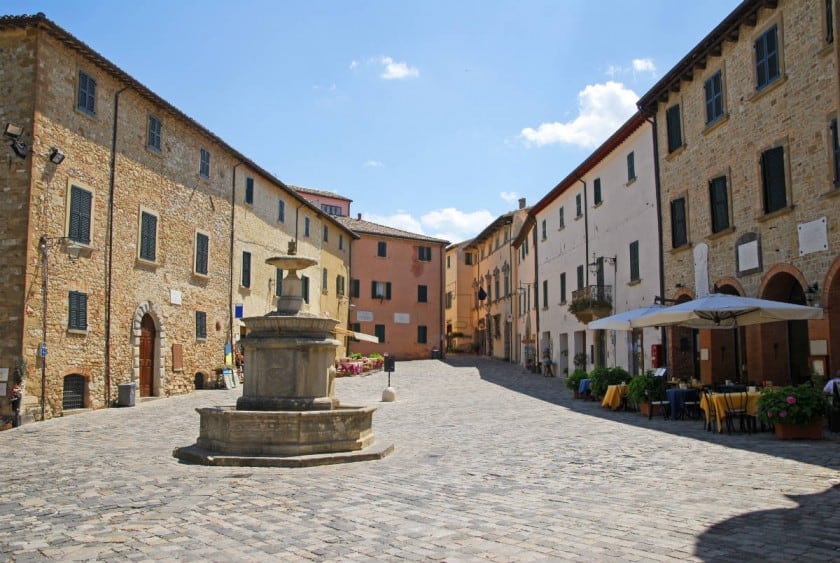 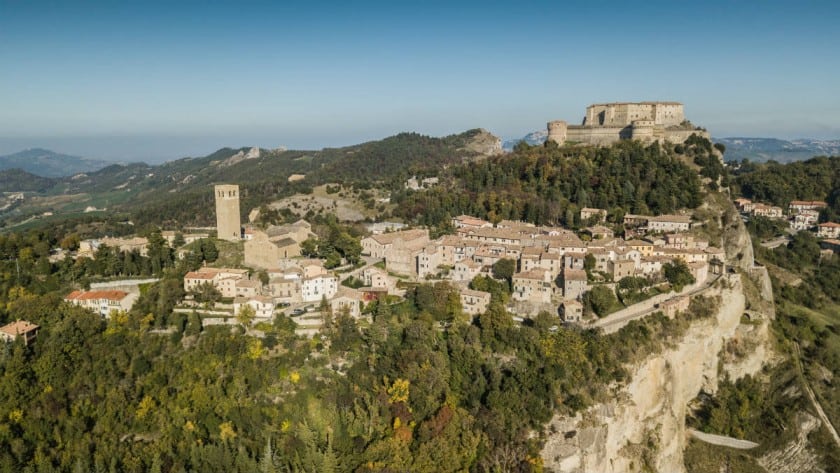 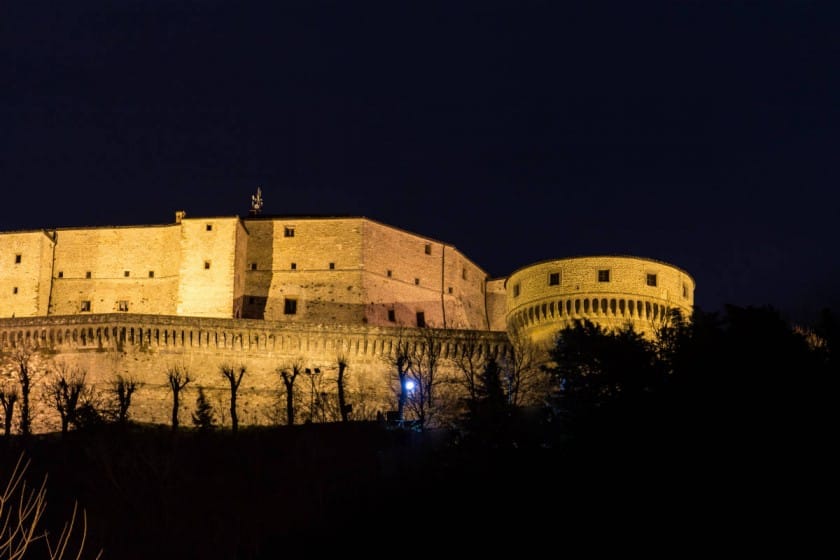 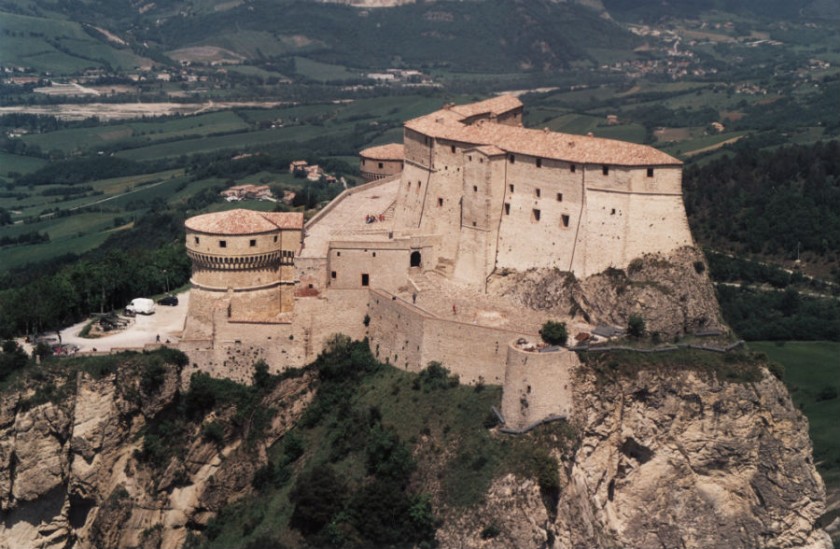 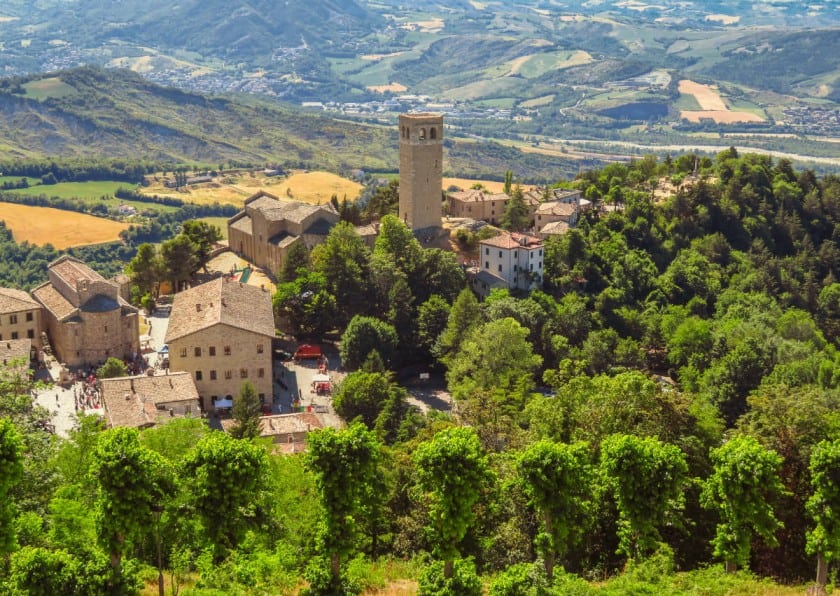 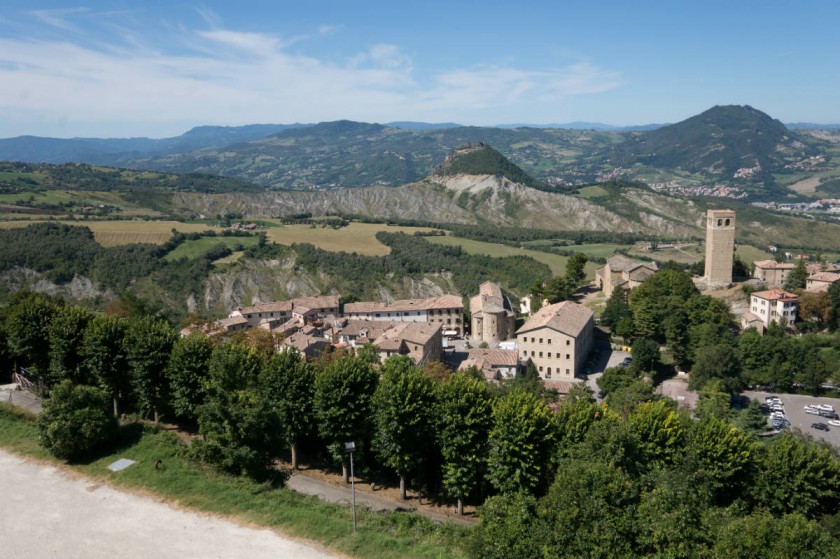 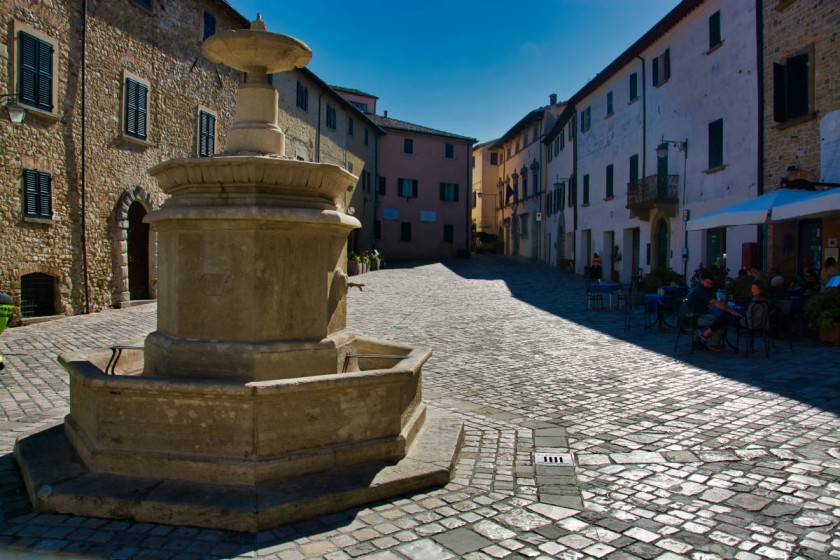 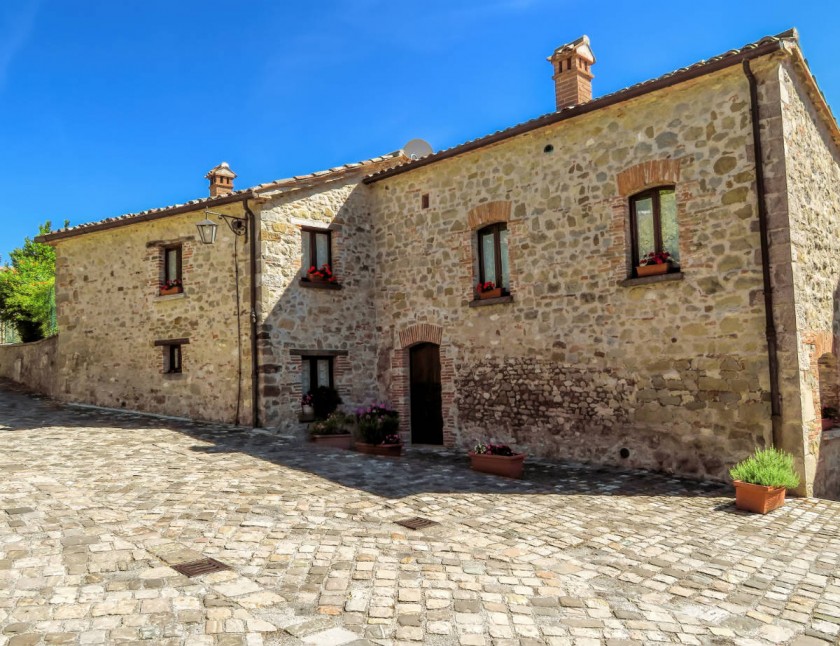 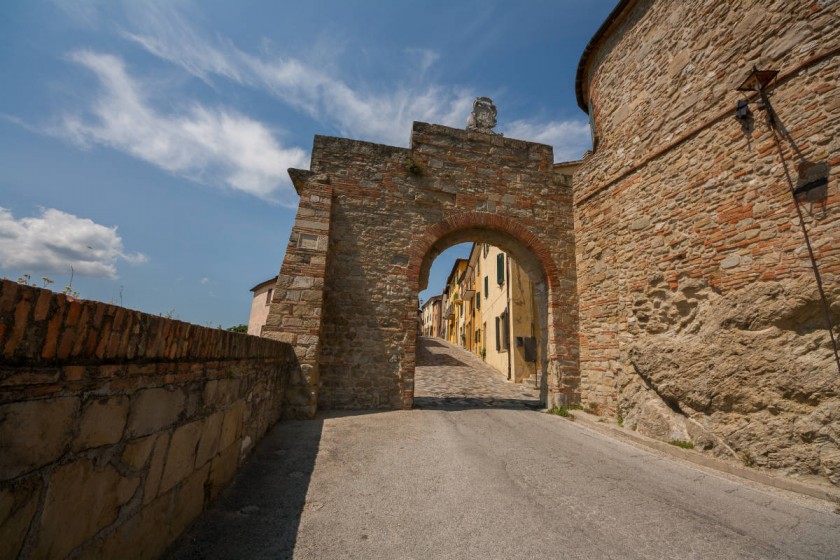 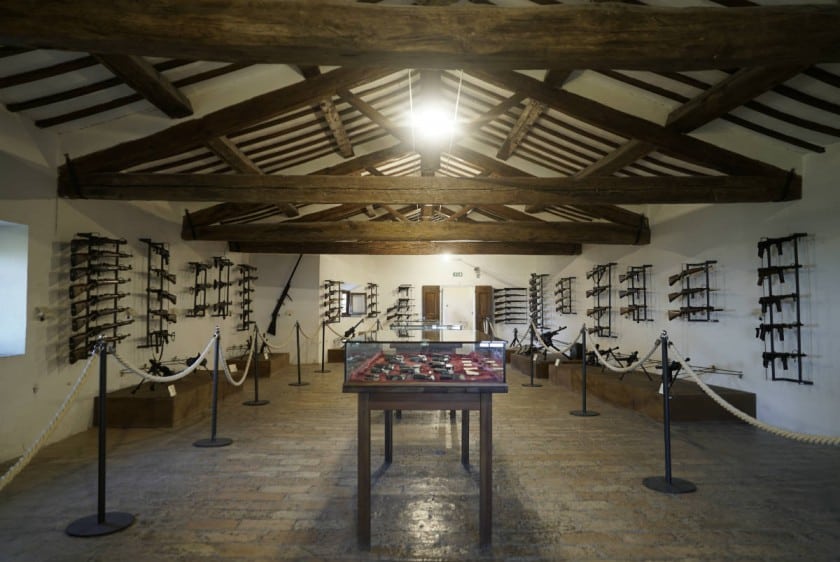 The weapons room inside the castle
D-VISIONS/shutterstock 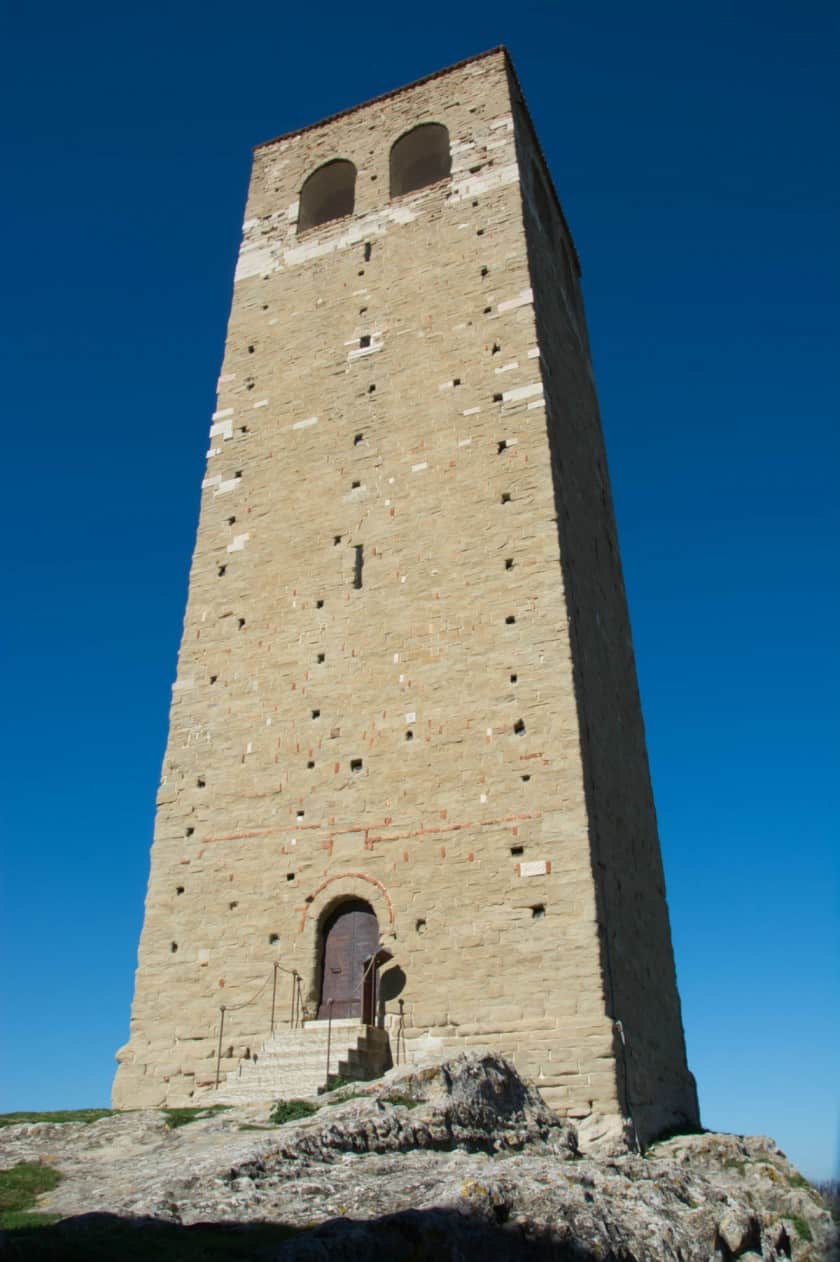 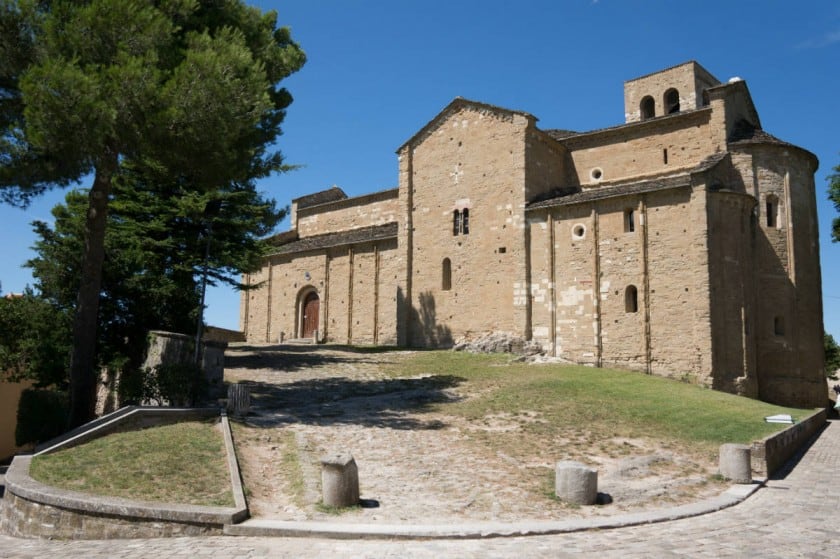 A look at San Leo

San Leo is a small medieval village in the province of Rimini situated on a spur of rock in the Valmarecchia from which one can observe San Marino and Marecchia, on the border between Romagna and Marche.

Defined by Umberto Eco as "The most beautiful city in Italy", not everyone knows that the village of San Leo was once a military fortress. In fact, what fascinates visitors, for the grandeur and for the scenographic elegance, is the strategic Fort, dating back to the period of the wars between the Byzantines and the Goths (VI century).

The historic center of the village can be reached through a single road carved into the rock. Once in Piazza Dante, the only square in San Leo, you can admire: on the left Palazzo della Rovere and on the right Palazzo Nardini.
But the reference point for tourists is the classic fountain, located in the place where once there was the community tree or Olmo di San Francesco.
Next to the fountain is the Parish Church of Santa Maria Assunta, the oldest church of San Leo, and the Palazzo Mediceo.

Also the Cathedral of San Leo is an ancient and precious jewel, considered the most important medieval church of all the Montefeltro and one of the most singular and important testimonies of the Romanesque-Lombard architecture.

The rich history of the village has been a source of inspiration for the birth of various cultural events and popular festivals, which bring back to life the traditions and events of the past: "Giullari in Festival" recalls the figure of St. Francis of Assisi who arrived in the village in 1213 and takes place on the last weekend of June; "AlchimiaAlchimie" is an event dedicated to Cagliostro and takes place every year on August 26 (the anniversary of death), with markets and entertainment shows in the streets of the historic center; the Cherry Festival and the Threshing Festival offer participants the flavors and atmospheres of the peasant folk tradition.

During the demonstrations it is possible to taste some specialties of the territory: the digestive with liquorice called Balsamo di Cagliostro, the cheese with walnut leaves, San Leo honey and the sweet esplanade. Fresh pasta, cold cuts and meats are the real stars of the table: ravioli, tortelli, and tagliatelle with ragù or game are the first offered in all the menus.
Typical of San Leo are also the tortelloni stuffed with chard and ricotta (cheese), while among the latter the rabbit with wild fennel stands out.

The Municipality is part of:
I Borghi più belli d'Italia
Paesi Bandiera Arancione

Via Giuseppe Mazzini, 4, Monte Grimano Terme (Pesaro e Urbino)
10.72 Kilometers from San Leo
Civic Tower
All that remains of the old castle is the 15th-century municipal tower, located in a charming lit...

Via S. Girolamo, 22, Sant\'Agata Feltria (Rimini)
11.53 Kilometers from San Leo
The mill of Pontevecchio
Before you get to the village of Frontino, on the right you will find an ancient milling complex,...

Via Borgo, 1, Montegridolfo (Rimini)
28.07 Kilometers from San Leo
Rural Arts Museum
The Rural Arts Museum of Sant'Agata Feltria, in Valmarecchia, is fitted inside the Convent of San...

Find where to sleep in San Leo

Via Giovanni XXIII, 1 - 61021, Frontino (Pesaro e Urbino)
14.86 Kilometers from San Leo
Il Poggianino
In the splendid setting of the Marecchia Valley, in the heart of the spectacular Romagna hinterla...

Via Santa Maria, 2, Longiano (Forli Cesena)
19.60 Kilometers from San Leo
Agriturismo Il Sentiero
Located in the middle of the hills of Montefiore Conca.

Via Gemmano, 1050 - 47834, Montefiore Conca (Rimini)
20.88 Kilometers from San Leo
Il Poggianino
In the splendid setting of the Marecchia Valley, in the heart of the spectacular Romagna hinterla...

Recipe: the Spoja Lorda Romagnola
The spoja lorda romagnola is a typical feast dish that every real azdora (the real lady of the kitchen in Romagna) could do with your eyes closed! Also called the stuffed soup the spoja (puff pastry in dialect) is a delicate egg pasta (very similar to the Emilian puff pastry) filled with cream cheese, cooked in capon broth or hen which is then 'dirtied' (gross from which gross) with the stuffing. They have the appearance of small squares, about two centimeters on each side, made with the spur, the typic...
Continue
5 virtual tours to visit 5 monuments in the villages while staying at home
On days like these, when the watchword is "stay at home", it is logical to dream of starting to travel again, perhaps visiting some uns...
Continue
San Leo and the centuries-old tradition of jesters
They were nice jokers, buffoons. And, so called, it seems a beautiful and good offense. But, in strictly "professional" terms, they defined themselves in this way. We are talking about jesters, street jugglers who in the Middle Ages cheered the moments of everyday life of passers-by with dances, songs, sounds, acrobatics, imitations, jokes, stories of stories and legends. They lurked near a church or at the market stalls, they would sneak into village fest...
Continue
Cagliostro: the history of a temerarious adventurer imprisoned in San Leo’s fortress
In the province of Rimini on the highest rock in the village of San Leo, you can see the homonymous fortress, a huge building that dominates the whole Valmarecchia Valley. Today the fortress hosts a museum and an art gallery, but in the past, it had a totally different function… Everybody yearned for the magnificent fortress: the Byzantines, the Goths, the Franks, and the Langobards, as well as noblemen like Cesare Borgia and the Montefeltro family. Then, from 1527 to 1631 San Leo was gover...
Continue
San Leo Festival, events in music
Another summer and, finally, a new beginning. Where? In San Leo, in Romagna and in the heart of Val Marecchia, one of the most scenic villages of the Peninsula. A thousand-year history surrounds this intriguing village perched on a rocky spur in which returns, from July 2 to 24, the “San Leo Festival”, this year entrusted to’Legamidarte association and under the guidance of Marco Papeschi, artistic director of Legamidarte. A festival with the spotlight on thirteen concerts, fifteen advanced courses and eleven days of Cam...
Continue