Share
Labro is a small medieval village called "the stone village". A unique village for its millenary history of fortress guarding the ancient borders between the Umbrian and Rieti lands. The place offers, in addition to the beauty of the village and the nature that surrounds it, the possibility of reaching other places of great interest such as: Leonessa, Terminillo, Carsulae, Piediluco, the Marmore Falls and much more.

A look at Labro 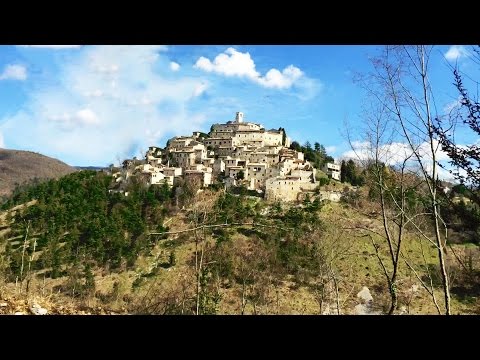 Placed at the top of a wooded hill that from one side dominates the lake of Piediluco and on the other the immense cliff of Monte Terminillo, history of Labro is millenary. A fortress to guard of the ancient boundaries between the Umbrian countryside and reatine that has managed to remain intact over the centuries.

Labro was the first village of Lazio to have the good fortune to be entirely subjected to a restoration of conservative type. At the end of the sixties, the ancient town, almost completely depopulated by virtue of the lack of accessibility to passenger cars, was 'discovery' from a belgian architect that undertaken an inspired as daring Work of urban recovery.

Finds of archaeological value of protohistoric settlements occurred near Labro attest as before the partial drainage of Lacus Velinus, happened in roman times, the populations they trusted in the hills to escape the unhealthy climate.

Uncertain is the origin of the name of the country: for some would derive from the latin "afor, aprum" wild boar. According to a legend, the first fortress of Labro was built by a patrician Rieti, the Lord De' Nobili, which, on the occasion of a hunting, he had made a promise to build a castle in the place where would have killed his first wild boar; and, almost to the memory of the fact, even today the coat of arms of the country bears upon himself the image of a wild boar under an oak. For others, and this seems to be the most probable hypothesis, the name Labro would be a derivation of "lavabrum" which in Latin means "tub, basin": this also for the proximity to the country of the lake of Piediluco, a time which is much more extensive, on the edge of which the country would come in ancient times to be.

Labro appears for the first time in the chronicles when, in 956, King Brass gathered all the settlements which have arisen in the district: is the beginning of the feudal era and the history of the country. From the tenth century of the modern era is already have precise information on the contrada and the castle of Labro, built by the noble in the likeness of the Rocca di Spoleto; and from 956 starts the feudal history of the country, when the German Emperor Otto I invests Aldobrandino De The Noble Lord of Labro and grants to him, in addition to the above title, the lordship of other 12 castles situated between the Duchy of Spoleto and the suburbs of Rieti.

In the Medieval period were countless wars that Labro fought against the nearby castles, especially against the rocca di Luco. Just for one of these wars family de' Nobili came to lose in the second half of '400, the lordship of Labro and impregnable encroachment which stood in the high part of the country comprising, inter alia, a high tower from which the top around the heart of Italy could be scrutinized.

The Noble family donated in the XII century in S. Giovanni in Laterano the fourth part of Labro to find a valid support in the fight against or Normans, that at the apex of their splendour were on the borders of Morro. To the ancient family of the lords remained only the wall of the castle, and leaning on this Giordano De' Nobili, in XVI century built a strong palace, now exists and the property of the noble family Vitelleschi .

A memorable episode that is aconra told happened during the Second World War. During a retaliation fifty-one men of Labro were put to the wall. It was only for the decisive intervention of the Marchioness Maria Giovanna, you managed to postpone the execution thanks to its knowledge of german and a valuable diplomatic skills, thereby saving the life of an entire country.

In the course of the '200 Labro joined the contado of Rieti and it followed its history. This fascinating history is law, still today, buildings preserved through a careful restoration and rigorous.

In the village you enter through the port Reatina, surmounted by a nice around arch; the scenario that arises after crossing it strictly walk, is that of a climb of winding stone streets lined with palaces, where every architectural detail speaks to us of the past. In Via Vittorio Emanuele stands a beautiful window guelfa and a door with ashlar in relief that the architrave has written: "actionum glory finis".

In the heart of the village are the three doors set into the walls that form a small hall, from which depart three arteries that wind in the country; one of them leads to the noble palazzo Vitelleschi whose visit reserve wonderful surprises, from furnishings well cared for a complete archive of the family itself. Continuing toward the upper part of the village, you arrive to Santa Maria Church erected in the collegiate church in 1508. After the church you will arrive in the highest part of the country where there is a splendid teatrino, frame of refined representations, from which you can admire a breathtaking panorama that you lose the horizon on the Piediluco Lake.

Outside of the country, at the cemetery there are the Church of Santa Maria della Neve and an ancient convent of the Franciscan Friars who settled at the end of the XVII century. Today the complex, carefully restored, allows you to admire the ancient and the modern in perfect symbiosis. Other pearls of this place are Palazzo Crispolti with a beautiful internal garden and an ancient source of the XV century.

Labro enjoys a wide panorama: the snowy mountains of the Group of the Terminillo East, Piediluco lake to the West, the road that climbs to Leonessa, Cascia, Norcia; grow the chestnut, the laurel "nobilis"; in the valleys, the wind fruga meadows and ago flutter ears.

The ancient houses, the noble palaces have been restructured in recent years by the architect Ivan Van Mossevelde; for merit of this architect the unmistakable silhouette stands out again, sharp, in the blue, with its original contours.

Between the economic activity more traditional, popular and renowned there are those craft, as the art of tapestry.

Village of Labro
Municipality of Labro