Share
Immersed in the Gallipoli Cognato Piccole Dolomiti Lucane Park, Campomaggiore is a small town about 38 km from Potenza and 75 from Matera. Visiting the country means getting to know two cities immersed in the greenery of Basilicata. Abandoned following a landslide in 1885, old Campomaggiore was a small Roman village, founded on a military camp. Today, however, it appears as a precious architectural jewel of extraordinary beauty and charm, in the heart of the Dolimites. 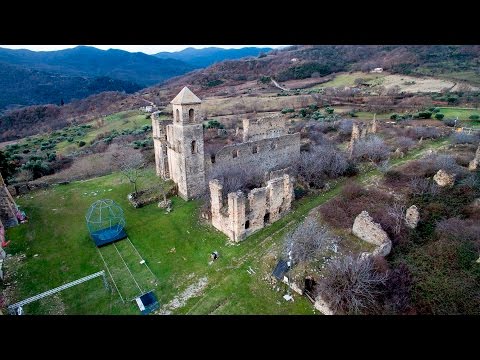 Campomaggiore, immersed in the Gallipoli Cognato Piccole Dolomiti Lucane Park, is a small town about 38 km from Potenza and 75 from Matera. Visiting the country means getting to know two cities immersed in the nature of Basilicata.

The ancient village, founded in 1741 by the Rendina family of origin from Benevento, located at 473 meters high on the left of the Basento river, was considered an ideal city, conceived according to innovative criteria for the time and with a vision of some philosophical currents that recall utopian socialism.
Everyone was granted the same rights and duties and this is the utopia to which the founders aspired, the design of a perfect society in which all men should have achieved a happy coexistence, in a context of tranquility and peace.

Vestiges of that experience, painfully interrupted due to a violent landslide, still remain in the ancient village: significant architectural structures that clearly refer to the urbanistic and socio-economic experiment promoted by the noble Rendina family and, among the ruins, the all equal and uniform ittle houses granted to the colonists, by virtue of a "social pact" which guaranteed everyone: a stone house, a field to be worked and the guarantee of daily bread.

In fact, an edict was issued in the surrounding countries to repopulate the village, already an abandoned feud: all those who had moved to Campomaggiore would have had the free concession of two tomoli of land, the possibility of cutting the beams and the boards necessary for the construction of the roofs, with the obligation to plant for each oak plant or turkey oak that was severed, three plants of fruit trees.
However, the utopian dream, which had seen the town grow by 80 inhabitants in 1741, the year it was founded, until 1525 in 1885, the year of the landslide, was interrupted and the population was forced to abandon it to head to the "Difesuola" area, where now stands Campomaggiore Nuovo.

What remains of the old village is the fascinating Palazzo Baronale, which overlooks what was once the Piazza dei Voti, so called to remember the moment when the first sixteen families settled in Campomaggiore gathered to choose to embrace the count Rendina's utopian project.
Opposite the building there are the remains of the church dedicated to the Madonna del Carmelo. Around it are still visible the walls of the ancient peasant houses.

A few kilometers from Campomaggiore Vecchio it is possible to visit the Casino della Contessa or Villa dei Cutinelli-Rendina, the summer residence of the Rendina.

Piazza Conte Antonio Campagna, 1, Castelmezzano (Potenza)
4.63 Kilometers from Campomaggiore
The via ferrata and the Nepalese bridge
The Via Ferrata is an equipped path to scale the Lucanian Dolomites.

SP13, Pietrapertosa (Potenza)
5.13 Kilometers from Campomaggiore
Church and Convent of San Francesco
The Church of San Francesco rises behind the western side of the homonymous convent in the villag...

Via Vittorio Emanuele, 24, Pietrapertosa (Potenza)
5.30 Kilometers from Campomaggiore
Mother Church of San Giacomo Maggiore
The Mother church, dedicated to San Giacomo, is located in the village of Pietrapertosa in Dolomi...

Piazza Umberto I, 5, Viggianello (Potenza)
65.93 Kilometers from Campomaggiore
Notarchirico's Archaeological Area
Situated in Contrada Notarchirico near Venosa, in Basilicata, contains some finds dating back to ...

Contrada Notarchirico, Venosa (Potenza)
46.66 Kilometers from Campomaggiore
Cathedral of Rapolla
The Church of San Michele Arcangelo is the Rapolla cathedral and concathedral of the diocese of M...

Via Regina Elena, 35 - 85027, Rapolla (Potenza)
56.62 Kilometers from Campomaggiore
Cathedral of San Biagio
the sanctuary of San Biagio is the main place of catholic worship of Maratea, in Basilicata.

Hermit's Cave Farmhouse
The Hermit's Cave is a biologic farmhouse located near the village of Castelmezzano in Basilicata.

Campomaggiore is present in issue 5 of our digital magazine e-borghi travel.
Read it now!