Share
The medieval village of Frontone, located at the foot of Monte Catria is called "The little Switzerland of the Marches". Arriving in Frontone one cannot fail to notice the imposing silhouette of its ancient Castle, placed on top of a characteristic 571 meters high overlooking the valley below, where the modern village, current municipal seat, lies with its tidy structure. while the ancient part of the town, with its narrow and long lanes, is located on top of the cliff, perched at the foot of the castle.

A look at Frontone 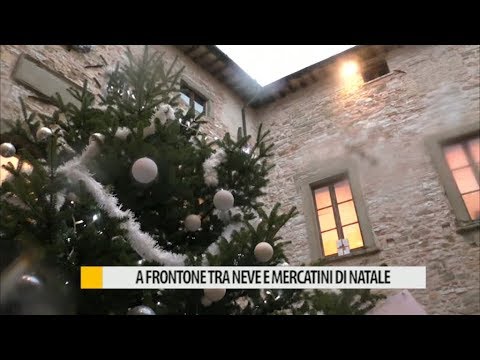 at the foot of the massif of Monte Catria, (1701 m.s.l.m.), the territory of the pediment offers numerous attractions both architectural and natural. The landscape is surrounded by fresh valleys and green hills, ideal for walks and excursions along the easy paths or cultural tour, while the attractions can be visited, in addition to the famous Rocca, are the Hermitage of Fonte Avellana, dating back to the year One Thousand and known for having hosted personalities such as San Pier Damiani and Dante, which recalls Fonte Avellana in XXI canto of Paradise. The Castle of Frontone was fortification of border surveillance of the territory that the romans crossed to reach the Adriatic. Represents the last stronghold of the duchy of Montefeltro.

The territory was inhabited by the Umbrians, Galli and was occupied by the Romans in 295 BC circa. The history of the village is linked to his castle, disputed by principles and from warriors for the domain of the surrounding districts and that today represents one of the clearest examples of military architecture of the XI century. For long periods had to submit to the jurisdiction of Cagli and then to that of Gubbio. From 1291 to 1420 the lords of the pediment were the Gabrielli of Gubbio. Ousted The Lordship by count Guidantonio of Urbino, Frontone fits for over a century in the history of the illustrious family of Montefeltro and of Della Rovere that succeeded in possession of the Duchy of Urbino.

In 1445 Sigismondo Malatesta of Rimini in the war against the Duke Federico da Montefeltro, tried to take away from him the castle, but the personal intervention of Duke Federico mise fleeing the Malatesta. It was probably due to this fact of weapons that the Duke decided to undertake the important work of strengthening of the defensive system drawing on the work of Francesco di Giorgio Martini, famous architect and connoisseur of military science.

The pediment it became a county in 1530 and the Duke of Urbino donated it to the noble modenese Giammaria of the door. In 1808 the door were deprived of all rights, faculty and jurisdictions enjoyed, except that of the noble title and private properties. After years of abandonment, in 1965 the castle was bought by Dandolo vital that the rivendette a few years after the Count Ferdinand of the door. In 1985 the municipality of Frontone decided to buy it and in fact, today the castle is owned by the commune.

The main dish of Frontone are the tagliatelle, both with white ragout of porcini mushrooms, that with the meat sauce with duck sauce, and the crescia, not to be confused with the piadina.

Via Santa Maria in Val d'Abisso, Piobbico (Pesaro e Urbino)
18.98 Kilometers from Frontone
Brancaleoni Castle
the ancient Brancaleoni Castle is the symbol of the village of Piobbico, in Marche region.

Via del Palazzo, Piobbico (Pesaro e Urbino)
19.59 Kilometers from Frontone
The monumental complex of Montefiorentino
Montefiorentino is one of the largest convents of Marche Region, with spacious interiors and over...

Via Giuseppe Mazzini, 4, Monte Grimano Terme (Pesaro e Urbino)
44.52 Kilometers from Frontone
The mill of Pontevecchio
Before you get to the village of Frontino, on the right you will find an ancient milling complex,...

Via Giovanni XXIII, 1 - 61021, Frontino (Pesaro e Urbino)
39.97 Kilometers from Frontone
Locanda Le Querce - Country House B&B
This beautiful hotel is located in the region of Montefeltro, between Tuscany and Romagna.

Via Ca' Giorgetto, Località Calmugnano, Frontino (Pesaro e Urbino)
41.61 Kilometers from Frontone
B&B Dimora della Rovere
At the border between Romagna and Marche, this bed&breakfast is steeped in history and immersed i...

Via della Rovere, 4 - 61012 , Gradara (Pesaro e Urbino)
47.60 Kilometers from Frontone
La Loggia Relais and Emporio
The Loggia Emporio and Relais is located in the heart of the village of Gradara, in the Marche Re...

Via Dante Alighieri, 2, Gradara (Pesaro e Urbino)
47.58 Kilometers from Frontone
Bar Ex Corpo di Guardia
This historical bar is your chance to go back in time and to live an amazing experience into the ...

Recipe: the Crescia of the village of Frontone
typical product of the Pesaro Apennines, the Crescia, which already replaced the bread at the Montefeltro court, boasts a recipe that has been handed down for generations thanks to the peasant tradition of the inhabitants of the village of Frontone. Not to be confused with the piadina, the Crescia, softer and tastier, can accompany perfectly, or be stuffed with cold cuts, herbs, boiled vegetables or anything that can whet. La Crescia in graticola, so called because it is cooked in Frontone directly on the hot coals, can also represe...
Continue