Share
Fossombrone is an ancient Roman town located in the middle Metauro valley, along the path of ancient Flaminia. In the fortified village, dominating the city, there are the remains of the Rocca Malatestiana, with a pentagonal plan, in whose courtyard stands the Church of S. Aldebrando. 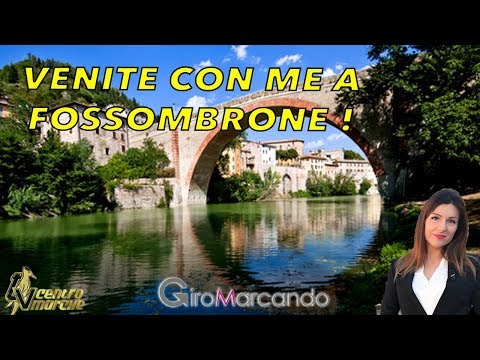 Fossombrone (Fossombron in dialect gallo-piceno) is the largest among the hamlets of media val Metauro, characterized by a medieval town center, lying on the slope of a hill and dominated by a citadel and by the ruins of the rocca malatestiana. The name Fossombrone undoubtedly derives from the Forum Sempronii name of the ancient Roman center linked in turn to the figure of the tribune Gaius Sempronio Gracco happened in these areas in the 133 B.C. to the application of the agricultural law.

The village of Forum Sempronii, 164 miles from Rome, was located to the east of the current Fossombrone, in the locality of San Martino del Piano, was soon to be elevated to the rank of Town Hall (I century a.C.) and experienced a period of splendour in the imperial era. The ancient city was devastated by the Goths guided by Alaric, in transit toward Rome in 409 A.D. after many ruins the inhabitants built the new center on the hill that dominates the current city. In the Lombard period its territory was the theater of a hard battle between king Liutprando and the rebel duke of Spoleto Trasmondo that won, was deposited and closed in a convent.

Fossombrone as it is clear from the written documents, remained outside the domain of the Church until 999, after which came under the power of Pope Sylvester II. In the first years of the XIV century the Church State invested the Malatesta family to the lords of the city, and in their hard government proceeded to the construction of the imposing fortifications. In 1444 Galeazzo Malatesta, lord of Pesaro, sold the town to Count Federico da Montefeltro, under whose dominion, Fossombrone enjoyed a period of prosperity for the flourishing of productions of wool, paper, silk and the building renewal.

Federico was succeeded by his son Guidobaldo who lived there almost constantly because of the pleasantness of the place and the healthy climate and was succeeded by Francesco Maria Della Rovere nephew of Guidobaldo. Under the Duchi Della Rovere the city was greatly expanded, Francesco Maria II in 1616 did expand the town in the plain below the hill up to touch the Metauro river. In 1631 having settled the family Della Rovere, the entire duchy of Urbino, and therefore also Fossombrone, passed under the direct control of the state of the Church, of which State became part until 1860 year of annexation to the Kingdom of Italy of which it followed by then the historical events.

Give a certain prominence at Fossombrone some streets and neighborhoods of historic center born around the XV and XVI century, during the period in which the town was elected country residence of the family Della Rovere. Great importance is Corso Garibaldi for its palaces four-sixteenth century as palazzo Staurenghi Cattabeni, municipal, episcopal and even though they have lost much of their ancient splendour except for the High Court. Between the ecclesiastical buildings are worthy of note are the churches of San Filippo, St Francis, St Augustine, Sant'Aldebrando on citadel and the Cathedral. Worthy of note is the monument 'twinning', cast in bronze by the artist Andrea Corradi.

Certainly deserve a visit the Archaeological Museum 'Augusto Vernarecci', the house museum and the Quadreria Cesarini, the Ponte della Concordia, the symbol of the village, and Archaeological Park Forum Sempronii.

Viale della Vittoria, 5, Mondavio (Pesaro e Urbino)
12.91 Kilometers from Fossombrone
Roveresca Fortess
The Fortress of Mondavio represents one of the most important testimonies of the project activity...

Corso Giacomo Matteotti, 61, Pergola (Pesaro e Urbino)
14.14 Kilometers from Fossombrone
Church of the Magi
the Church of the Magi is placed in front of the mother church of Pergola, in Marche Region.

Via Don Minzoni, 84, Pergola (Pesaro e Urbino)
14.43 Kilometers from Fossombrone
Gilded Bronzes Museum
The Museum of the city of Pergola, Marche, preserves the Gilded Bronzes of Cartoceto, unique in t...

Via Santa Maria in Val d'Abisso, Piobbico (Pesaro e Urbino)
26.22 Kilometers from Fossombrone
Church of the Magi
the Church of the Magi is placed in front of the mother church of Pergola, in Marche Region.

Via Giovanni XXIII, 1 - 61021, Frontino (Pesaro e Urbino)
35.79 Kilometers from Fossombrone
Locanda Le Querce - Country House B&B
This beautiful hotel is located in the region of Montefeltro, between Tuscany and Romagna.

Via Ca' Giorgetto, Località Calmugnano, Frontino (Pesaro e Urbino)
37.37 Kilometers from Fossombrone
B&B Dimora della Rovere
At the border between Romagna and Marche, this bed&breakfast is steeped in history and immersed i...

Via della Rovere, 4 - 61012 , Gradara (Pesaro e Urbino)
28.28 Kilometers from Fossombrone
La Loggia Relais and Emporio
The Loggia Emporio and Relais is located in the heart of the village of Gradara, in the Marche Re...

Itinerary of beauty
The Beauty Route is a project carried out by Confcommercio di Pesaro e Urbino/Marche Nord which has created a "network" of 12 municipalities that have entrusted it with the task of promoting and enhancing the rich artistic, cultural, environmental and enogastronomic heritage on a national and international level. And this using all the strategies and tools of tourism marketing. Sant'Angelo in Vado In some of these (Fossombrone, Mondavio, Per...
Continue
Marche Dream: 5 villages to taste through their typical dishes
Set like a gem in the heart of Italy, the small region of Marche attracts visitors with its unspoilt landscapes: wandering through its rolling hills, discovering its medieval villages and reaching the crystal clear waters of its beaches is a pleasure for body and mind. And what about the local cuisine? Simple and tasty, it reflects the soul of this region and is an integral part of the holiday.In this article we will savour 5 charming villages in the Marche region through their typical dishes. The journey starts from the beaut...
Continue