Share
Surrounded by vineyards and olive groves, Montefalco overlooks the plains of the Topino and Clitunno rivers from the top of a hill. For this favorable panoramic position, from 1568 he was given the title of Ringhiera dell'Umbria. From here, on clear days, it is possible to admire a 360 ° panorama that stretches from Perugia to Spoleto, from the Subappennino to the Martani Mountains.

Traditional parade over the streets of Montefalco on Easter Monday

A look at Montefalco 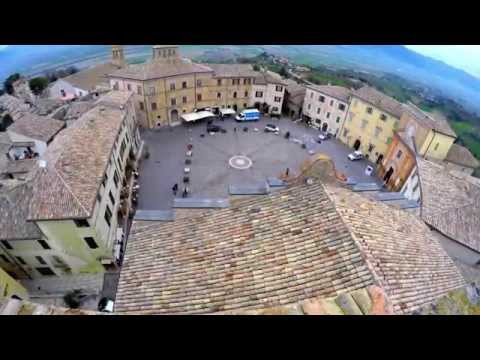 Patronal feast of St Claire of the Cross

Montefalco preserves a rich artistic heritage that makes it an essential reference point for the knowledge of Umbrian painting, starting with the museum complex of San Francesco which represents a synthesis of history.

Enveloped by the splendid medieval walls, there are many churches within the first wall, including the one dedicated to Saint Augustine. Once in the beautiful circular square, you will find the Palazzo Comunale, the former church of San Filippo Neri, now the theater, the small church of Santa Maria de Platea (among the oldest buildings) and significant examples of noble residences from the 16th century.

Montefalco, due to its position, is particularly suitable for a series of trips and excursions.
Without going too far from the village, Sistema Museo and the Civic Museum organize pedestrian itineraries with very interesting themed guided tours, through which it will be possible to explore places, crafts and flavors of the city past.
For art lovers, the Montefalco and La Meraviglia del Rinascimento itinerary, dedicated to Benozzo Gozzoli is the ideal.

In summer there is the appointment with "La Fuga del Bove", Montefalco's annual tradition in which the Piazza is transformed into an open-air theater with the show of the Four Quarters.

What to taste in Montefalco?
An essential cuisine that avoids sophistication, genuine, simple, very balanced and of great style, strongly linked to the traditions and recurrences of the past: the culinary tradition of Montefalco is linked to the typical Umbrian gastronomy, which uses the genuine products of the countryside and the tasty meat from local farms.

Montefalco owes its name to Frederick II of Swabia. The Emperor, visiting the places in the XIII century, noting the large number of the hawks in the area, decided to change the name of the locality from Coccorone (Coronae Cors) than the current one. The presence of the animal in the territory has been waning, until you reach the historic low in the modern age. On 31 July 2007 was released in the skies of Montefalco a pair of kestrels, with the purpose of restocking the project has had a great success and the kestrels you are reproduced.

Around 1280 the city was conquered from Todi, as witnessed by the city emblem representing an eagle and placed on a building to the right of Porta Sant'Agostino, during the period of employment tuderte begins the cultivation of grapes for the Grechetto that should be added to the traction more ancient of red wine, in the same period occurs even the construction of the Palazzo Pubblico (today the seat of the municipality) and of the most important religious buildings. The city became the most important fortification of the territory of Todi against Foligno and Spoleto until 1383 when its ups and downs before it passes under the Trinci of Foligno to then become as other Umbrian centers of papal dominion.

Piazza Filippo Silvestri, 3, Bevagna (Perugia)
5.67 Kilometers from Montefalco
Venus Gate
The Venus Gate is one of the six roman gates of the village of Spello, in Umbria.

Via del Forte, 34, Castiglione del Lago (Perugia)
55.27 Kilometers from Montefalco
Tales House
The Tales House of Vallo di Nera, in Umbria, is a research and documentation center on oral liter...

Fontana delle Pere
In a quiet corner of Umbria made up of olive groves, vineyards, meadows and Mediterranean scrub, ...

Via I Casali - 06040, Vallo di Nera (Perugia)
23.14 Kilometers from Montefalco
Paniﬁcio Pucci
The Pucci bakery confectionery has been offering for years its customers a rich production of swe...

Montefalco: Sagrantino, Saint Francis and the cellars of the friars
It is the ancient Coccorone and the current toponym born in the XIII century. Emblem of change is the fourteenth-century convent of Saint Fancis, famous for the valuable frescoes that cover the central apse, a work-masterpiece by Benozzo Gozzoli and depicting scenes from the life of the saint. A symbol of the genius loci that has passed through the centuries, the convent, now called the San Francesco Montefalco Museum, divided into a church-mu...
Continue
The enchanted village of Montefalco
The enchanted village of Montefalco stands on a small hill, from the road appears sly, closed as an oyster to open. It enjoys a beautiful panorama, made of vineyards cared for like Persian carpets, bell towers of small churches that peep out ... it ranges from Perugia to Spoleto. Montefalco must be found, it must be searched, it must be studied, this small village of about 7000 thousand inhabitants, contains priceless artistic treasures (such...
Continue
Recipe: Umbrian cheese cake
Among the Umbrian tables, on Easter morning, there is a traditional cheese cake. A savory panettone which, depending on the area, may undergo variations while maintaining its constants: cheese, pecorino cheese, salt and pepper. As per tradition, this soft rustic is accompanied by the flavors of the capocollo, boiled eggs and wine and in ancient times it was customary to prepare it during Holy Week and then take it to church, to be blessed, on Easter day.Let's see how it is prepared.
Continue