Share
Located along the valley of the Vigi torrent, Sellano preserves the characteristics of the original medieval village and constitutes one of the most typical places in the Valnerina. Struck by the seismic events that involved Umbria and the Marches in September 1997, it has now returned to its normal life, after a restoration respectful of the historical quality of the buildings. Numerous Romanesque churches symbolically aligned on the whole territory and the cave of the patron saint on the slopes of Mount Lugo, give an aura of mysterious sacredness.

A look at Sellano 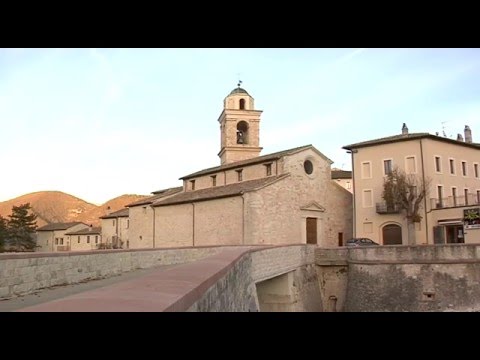 The toponym Sellano derives from the roman tribe of the gens "Suilla" or Syllinates, while some historians would bring the name of the village to the followers of Lucius Cornelius Silla, that lagging behind as a result of the battle of Spoletium (Spoleto) during the first civil war, would have founded in 84 B.C. by finding refuge and imponendovi the name of their head, from which "Syllanum". The first traces of settlement dating back to the Roman age (it was probably a vicus, as attested by several epigraphs found in the territory), from which, it seems, has lead the name itself. Sellano in the present aspect is entirely late medieval and rose in correspondence of itineraries that through the valley of the Vigi connected the Valnerina with Foligno and the Camerte and reached Spoleto along the track of the plug.

As a result of the Longobard invasion and the christianization of the territories, became a curtis with around some monastic communities of the Benedictine Order, feudal possession and finally free commune, though under the subjection of the city of Spoleto, but long contested by the imperial Curia. Starting from the late antique epoch Sellano assumed an increasingly strategic weight, determined primarily by its geographical position, and for this, subjected to the Longobards and included in the Duchy of Spoleto.until the second half of the XII century, after being under the domain of the Lords of Norcia, was a fief of the Apennines of Germanic accounts of Alviano, probably among the first castles to be built up in this area, up to develop in the structure of autonomous common montano and establishing a federative pact and defensive with the expansionist town of Spoleto, which remains hooked as the diocese of Spoleto-Norcia together with the whole Valnerina.

In the XIII century, in fact, became part of the Papal State and in 1300 AC feud of Colligola, lords of Montesanto. The marked trends and ghibelline autonomistiche, Sellano was never strong enough to be able to be independent, but always considered a strategic point for its geographical position, in the centuries its destiny becomes inextricably bound up with that of the neighboring towns. On various occasions he was head or in partnership to movements of rebellion (as in 1300 together with other nearby castles against Spoleto) and claim policy and statutory, up to the year 1523, in which occurred the definitive pacification with Spoleto. From then until the Napoleonic era, Sellano lived as "earth" of the arrondissement of Spoleto, developing subsequently and gradually from an autonomous municipality, expanding the administrative power and territorial on former neighboring castles Apagni, Postignano, Cammoro, Orsano and Montesanto, that, being smaller, had not inhabitants sufficient to maintain its autonomy.

Struck by the seismic events that involved the Umbria and the Marches in September 1997, is now back to its normal life after a restoration respectful of the historic quality of buildings and regulations earthquake. The center is very compact inside the town walls with bastions and access doors to the main tower, with some palazzetti gentilizi, among which stands out the communal one, and some buildings of cult.

This place was origin and humus of enlightened men and saints like the musician Domenico Mustafã , the poetess Hedwig Fish Gorini, San Severino and San Paterniano, of which today remains a therapeutic shrine, the Blessed Giolo, Father Felice, Capuchin friar and ambassador to Persia, and brother Justin from Norcia, famous for the miracle of the pharmacy (which historical fact attests in Sellano a symbolic meaning of "Pesata" as in the Universal Judgment).

Numerous romanesque churches aligned symbolically throughout the territory and the cave of the Patron Saint on the slopes of monte Iugo, lend an aura of mysterious sacredness. In some of these the frescoed churches there are precious statues of wooden pilgrim. In the breaks work the dolce far niente is interrupted promptly by seasonal events such as: fishing contests the fario trout autochthonous, hunting for wild boar and wild game, the collection of a wide variety of mushrooms and truffles (winter and summer), fruits of the forest and many types of salads of field and wild vegetables. The outdoor activities that you can practice are: bathing in the lake Vigi, ascent on foot along the course of the waterfalls of the "Rote", numerous trails on foot, mountain bike or with horses or mules.

The small village of Villamagina, near Sellano, dominates, so majestic, the valley of the Vigi. Historically known for the production of files and rasps, a processing of ancient origin that acquired notoriety in 1700, which, according to oral tradition, was introduced by a monk from Tuscany, that struck by the poverty of the population, taught the secret of the manufacture of the rasps.

Attorta
delicious cake, typical of the tradition sellanese. A thin puff pastry flour-based water and oil on which is wound a compound formed from walnuts, sugar, oil d’olive and apples. At the base of the dough, according to different variants, you can add other dressings, as alkermes, cocoa, raisins, dried figs, cinnamon or pine nuts. The roll is twisted on themselves, brush with oil or alchermes, sometimes dusted with sugar and cooked in the oven.

Fojata
a savory pie consisting in a thin sheet of dough “matta” rolled and stuffed with herbs of the field, sometimes today, replaced with Swiss chard or chicory. The fojata, a time, was cooked under the coals, in capacious baking tins of copper, or in the ancient wood ovens. The secret always remains the same: a browse crunchy and very thin, which leaves the vegetables well seasoned absolute protagonists in a blaze of taste buds.

The territory of Sellano also offers gastronomical products of the highest quality which refer to culinary traditions of ancient. Here we find The best meat of Apennines, starting from those of Chianina and pigs reared in the area and skillfully worked from the best norcinerie. You will also meet very tasty cheese and delicious products of the forest as the chestnuts, Mushrooms.

On everything stands out the valuable black truffle, to savor on a variety of dishes and, in particular, on the pasta pulled by hand, in spaghetti and omelets with truffle, risotto alla Norcia, The Woodcock to Norcia and black truffles roasted.

The known local olive oil, is to be regarded as certainly as the common ingredient of all the traditional recipes. Among the specialties play a fundamental role the excellent meat, from game to the lamb, by the ox to kid and to game, traditionally served grilled or roasted on the spit. Also as regards the local wines, we are faced with a choice between white and red wines, rose and Novelli.

Among the sweets we find the attorta (prized black truffle based on walnuts), Easter pizza dolce, maccheroni with walnuts, the sanguinaccio (with pig blood).

Village of Sillano
Municipality of Sellano

the Municipality is part of:
Città dei sapori

Via Galileo Galilei, località San Fortunato, Montefalco (Perugia)
21.57 Kilometers from Sellano
St. Lucy's Church
The Church of St Lucy in Montefalco is one of the most ancient of the village.

Via dei Vasari, 31, Montefalco (Perugia)
21.90 Kilometers from Sellano
St. Francis Museum Complex
The museum complex of San Francesco in Montefalco is a prestigious museum of Umbria, thanks to th...

Via Ringhiera Umbra, 6, Montefalco (Perugia)
21.94 Kilometers from Sellano
St. Lucy's Church
The Church of St Lucy in Montefalco is one of the most ancient of the village.

Strada Vicinale Colle, 7, Massa Martana (Perugia)
34.22 Kilometers from Sellano
St. Francis' Church
The church of San Francesco is located in the historical center of the village of Deruta in Umbri...

Via V. Emanuele, 91, Castiglione del Lago (Perugia)
75.59 Kilometers from Sellano
Fontana delle Pere
In a quiet corner of Umbria made up of olive groves, vineyards, meadows and Mediterranean scrub, ...

Via I Casali - 06040, Vallo di Nera (Perugia)
15.27 Kilometers from Sellano
Pucciotti Fabrizio farm
The Pucciotti Farm is located near the medieval castle of Vallo di Nera.

Via Roma, 11, Castiglione del Lago (Perugia)
75.96 Kilometers from Sellano
Paniﬁcio Pucci
The Pucci bakery confectionery has been offering for years its customers a rich production of swe...