Share
Rich in a large historical and artistic heritage that places it among the most important art cities of Umbria, Norcia is located in the heart of the Sibillini Mountains National Park. Other traditional, widespread and active economic activities include crafts, such as the renowned wrought iron manufacturing, aimed at the production of chandeliers, lanterns, domestic tools and objects depicting animals.

A look at Norcia 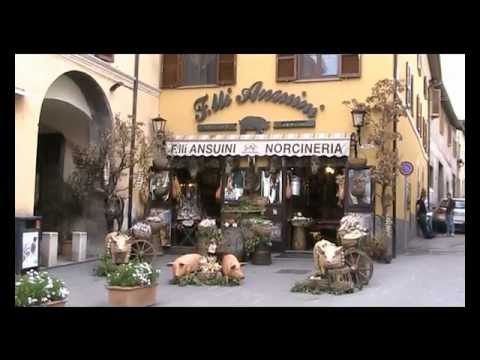 Norcia (Nursia in Latin) has been damaged by the earthquakes of 24 August and 26 October 2016: the latter has been collapse of a large part of the church of San Salvatore. On 30 October 2016 a shock has caused the collapse of the Basilica of San Benedetto and his eighteenth-century bell tower. There are also collapsed the Concathedral of Santa Maria Argentea, the churches of Santa Rita and San Francesco, the Sanctuary of Our Lady of Sorrows with its bell tower, the church of Sant'Agostino and portions of the walls and the medieval towers, and has damaged the Palazzo Comunale and the Castellina.

The artistic heritage of the town truffle, albeit still substantial and interesting, suffers however of seismic events, often catastrophic, that over the centuries have inflicted severe injuries, destroying monuments and important traces of a distant past that dates back to pre-Roman times. Moreover are characteristic, in a large part of the historical center, the low buildings and with the perimetral walls to the shoe, testimony of the regulations which were adopted in the legislation the pontifical "ad hoc" after the earthquake of 1859, where it recommended constructions to Baracca. The Fulcrum artistic-monumental city center wheel certainly around its central square where, with an organization of renaissance flavor concentrate buildings symbol of identity truffle: the Basilica of San Benedetto, the Portico of measures, Castellina, the Cathedral of Santa Maria Argentea and the Tempietto.

Norcia today is a village with a strong tourist vocation for which the demographic bleeding seems to have stopped. The territory attends to a population growth and a reborn even of small villages, a time almost abandoned. The traditional activities, linked to the processing of pork and collection of black truffle, joined to the beauty of the landscape of the mountain district, make it a meta discreetly coveted by customers also international that especially in summer crowds the numerous hotels and centers of hospitality.

Pork products typical of Norcia find their peculiarities in production techniques, absolutely conventional. One of the most famous products is the Prosciutto di Norcia, rewarded with the recognition of the IGP mark already in 1998. From the Note food production of the city also derives the term norcineria used in central Italy to indicate the charcuterie.

Among other traditional economic activities, widespread and active there are those crafts, as well as the renowned wrought iron, aimed at the production of chandeliers, lanterns, household tools and objects depicting animals.

Traces of human settlements in the territory of Norcia date back to the Neolithic period, while it is witnessed with certainty a human presence continuously from the VIII century B.C. the foundation of the city probably dates back to the V century, thanks to the work of the Sabines, which in Norcia, in the area today identified with the toponym of Capo la terra, place the outpost more northern territory controlled by them. Probably the name Norcia must be placed in relation with the Etruscan name Northia of the goddess Fortuna romana. The city was conquered by the Romans at the beginning of the III century B.C., obtains the roman citizenship in 268 a.C., being aggregated to the tribe Quirina, and is allied with Rome in the war against Carthage. Becomes in the II century B.C. first Prefecture and then City Hall in Region IV Sabina. In the civil war that sees Ottaviano opposed to Marco Antonio Norcia forms an alliance with the latter and shares its fate in the aftermath of the defeat at the hands of the future first emperor. With the rise to power of the Emperor of origins Sabine Vespasiano, in the second half of the century d.C., Norcia, becomes the roman Nursia Valeria. His fame in this period is linked to the products of the countryside, to the rigidity of the climate (which earned the virgiliano epithet of frigid), and that of his most illustrious sons (duritia Truffle), with the republican general Sertorio in the first row and the mother of the Emperor Vespasian, Vespasia Polla. With the decadence of the Western Roman Empire and the invasions that ensue at work during the barbarian invasions, Norcia is repeatedly sacked and destroyed before by the Goths and then by the Longobards in 572 the subdued and the subject then the Longobard Duchy of Spoleto. Precisely in this period, at the end of the V century, Norcia sees the birth of its most famous citizen, San Benedetto founder of Western monasticism. Despite its location in a mountainous region and not easily accessible the umbrian town undergoes repeated attacks by Saracen pirates at the beginning of the IX century.

During the High Middle Ages Norcia is going through a period of deep depression and economic decadence who see almost succumb under the weight of an extremely high emigration rate and a high mortality index, so much so that in the 890 The city is abandoned by the population. At the beginning of the IX century a colony of Swiss francs is established in plain truffle, at that time almost completely depopulated. Agriculture autarchic of survival characteristic of this historical period determines the development of pig breeding whose meat, processed and resold to the urban centers nearby, becomes an important means of livelihood and exchange for the farmers of the area, otherwise free of other key resources. Throughout the Middle Ages Norcia is a guelf village subjected to papal dominion but still managed to establish themselves as a free municipality at the beginning of the XII century and to live a period of relative economic prosperity. At the beginning of 1300, Norcia consolidates its economic influence and its political prestige who see, together with Visso, fill the role of main urban center in the mountainous region that surrounds it. In 1354 is permanently subjected to the Church, but already in 1324 due to a catastrophic earthquake which destroyed most of the public and private buildings causing many victims, Norcia undergoes a coup de grace duty to its territorial ambitions.

In the late Renaissance, the Pontiffs assign to Norcia the seat of a prefecture pontifical with jurisdiction over a large part of the territories surrounding mountainous, placed on one side and the other of the side of the Apennines, consolidate for defensive purposes the walls that still surrounds, almost intact, the ancient town center and erect, designed by Vignola, the fortress called "of Castellina" which with its sober but elegant, dominates the central square of the city dedicated to Saint Benedict. In the course of the XVII century Norcia, strongly constrained to Rome from a strong dependence on political and administrative, lives an interesting period of artistic and cultural vivacity and as reflected in the baroque splendor that the Papal Courts inaugurated on the banks of the Tiber in that period in fact they intensify cultural exchanges with other cities of the peninsula and some famous artists come to Norcia dipingervi for some works. It rises a literary academy, are opened schools and founded a theater and the city is populated with churches, convents and monasteries.

In the course of the XVIII century the city is once again being devastated by a series of catastrophic earthquakes which upset the urban layout. The reconstruction which is necessary clear in large part the medieval personality of the umbrian town and sets up the structure typically nineteenth century that is visible today in a large part of the historical center. In 1860, in the aftermath of the plebisciti of annexation, Norcia joins the new Kingdom of Italy but with the advent of the twentieth century the city lives one of economic moments more difficult. The traditional agriculture cannot sustain competition of intensive agriculture already pre-industrial and campaigns live again a period of intense emigration in different directions.

Village of Norcia
Municipality of Norcia

Via I Casali - 06040, Vallo di Nera (Perugia)
19.05 Kilometers from Norcia
Pucciotti Fabrizio farm
The Pucciotti Farm is located near the medieval castle of Vallo di Nera.

Via Roma, 11, Castiglione del Lago (Perugia)
92.81 Kilometers from Norcia
Paniﬁcio Pucci
The Pucci bakery confectionery has been offering for years its customers a rich production of swe...

Recipe: Umbrian cheese cake
Among the Umbrian tables, on Easter morning, there is a traditional cheese cake. A savory panettone which, depending on the area, may undergo variations while maintaining its constants: cheese, pecorino cheese, salt and pepper. As per tradition, this soft rustic is accompanied by the flavors of the capocollo, boiled eggs and wine and in ancient times it was customary to prepare it during Holy Week and then take it to church, to be blessed, on Easter day.Let's see how it is prepared.
Continue
Recipe: Strangozzi with black truffle, excellence of Norcia
At the slopes of the Sibillini Mountains, Norcia is synonymous with products of unequaled quality, among which stands out the black truffle, whose shape is round or even "bitorzoluta", given by the stony soils that characterize the locality. The truffle of Norcia is a journey into excellence and in all seasons: winter black truffle from Norcia followed by the black winter truffle-scorzone and then here is the black summer scorzone truffle. Depending on the time of year, then, the prized "Tuber Melanosporum Vittadini" is enhanced with a de...
Continue
Umbria: the village of Norcia among black truffles, lentils and ham.
It is where the gentle landscapes of Valnerina meet with those of the mountains of the Sibillini Mountains that rises the village of Norcia. Village of art dramatically wounded by the earthquake, Norcia has its roots in the fifth century BC, when the lands of the Sabines was the northernmost outpost. Conquered then by the Romans at the beginning of the III century BC, in the first century AD becomes the Roman "Nursia Valeria", while in 250 it houses the bishop folignate San Feliciano, which converts it to Christianity making it be...
Continue
The Sibillini Mountains, an enchanted place in the Marche among magical caves, fairies and unicorns
Once upon a time, there was an enchanted cave, the house of a witch who, with its enchanting powers, was able to attract the most fearless knights and imprison them in his abode for a long time, forcing them to the damnation of the soul and the sin. She lived surrounded by her ancestors, fair-minded creatures who regularly went down to the valley in the night to dance with the local youth ... No, it's not a fairy tale (... or at least not just this), but one of the legends that originates be...
Continue