Share
A community where you can find historical finds, flavors and scents vigorous and cordiality typical of the rural environment made of small gestures and a great sense of hospitality. Enclosed in the lush valleys of Part Montis, Masullas always amazes for the importance of its cultural heritage. 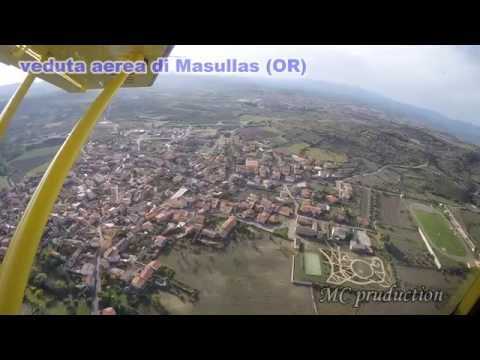 At Masullas everybody knows each other and the human relationships are beautiful, the people wishes you good things, not in a hurry, you do not say a simple Hello, but stop talking to ask you as you are. Live at Masullas is interesting because at 3 in the afternoon you can walk in a square immense and deserted, immobile, light years away from fashion and from the hustle and bustle of the big city. Masullas with its places, with its traditions with its festivals, manages to evoke something special and be the epicenter of dreams and memories. Masullas, a small village of 1000 souls in the heart of Part Montis, rises at 129 meters of altitude in the south of Monte Arci, situated in one of the most beautiful areas of the homonymous Regional Park . Earth Friendly, a territory rich in traditions, natural beauties, history and archeology.

Live Masullas means remain enchanted by the green of the olive trees, from the starry sky above the high bell tower, the expanses of the hills surrounding the valley, breathe in the scent of the hot air, hay, grass turned yellow from the sun. Means to be transported by the flavors of typical dishes and let yourself be spoilt by the enveloping embrace of its inhabitants. Masullas is red, vitality and energy, just like the Pomegranate, fruit that symbolizes the country. Masullas is known in the whole of Sardinia for its four typical pasta (crogoristas, caombas, pillus and tallutzas), appreciated by more chef islanders and even more delicious if accompanied by tasty tomato sauce and free-range chicken.

The ancient village of Masullas has a historical center still strongly linked to its medieval origins and to the importance assumed in the seventeenth and eighteenth centuries, with beautiful alleys paved streets, houses in sandstone, noble palaces and suggestive religious buildings. The hospitable community of Masullas puts at the first place the culture and its two museums are the example: the Museum the Knights of the hills, set inside the old town hall, tells the story of the rural aristocracy formed with the advent of feudalism and its implications in the administration of justice, both civil and ecclesiastical.

The GeoMuseo MonteArci "Stefano Incani" is located in the premises of the former convent of the Capuchin Friars. It is dedicated to the Monte Arci, with its minerals and its rocks, in which is written a geological history ancient and complex, narrated by means of reconstructions paleo environmental and numerous artifacts. Masullas is inside the Natural Park of Monte Arci and at the same time falls within the area 1 (the Monte Arci) of Parco Geominerario Storico e Ambientale della Sardegna, recognized by Unesco as a World Heritage Site.

In the locality of Conca Cannas is located the largest obsidian deposit of all the Mediterranean. At Gutturu Forru, is located the Megapillow On Carongiu de Fanari, which originated from the cooling of lava submarine in the Miocene, this is a true natural monument recognized by the Region of Sardinia in 2012. Among other geological monuments to visit, there are outcrops submarine lava of Sa Perda Bride which the popular imagination has woven a famous legend: a married couple from Siddi, stood to listen to the bells of Masullas that in that moment accompanied the procession of the Glorious Virgin Mary.

The bride had to say that the sound of the bells of the sheep of his father was the most harmonious. At the same moment the protagonists were turned into stone, the same that still today we can see among the wheat fields of those territories brulli on the border between Masullas and Gonnoscodina. Along the SS 442 it is possible to observe a curious stone block perfectly spherical, Sa Perda Sperrada, characterized by a perfect central slit, from which it derives its name. It testifies to the erosive action of the atmospheric agents: water, the alternation of hot climates and colder, in the course of millions of years have shaped this rock, bringing to birth of legend: one of these narrates that the rock was a pig turned into stone and split by a kick from Luxia Arrabiosa, legendary character of the area of Monte Arci.

Visit to the village of Masullas offers unforgettable emotions in every moment of the year, also thanks to the many religious holidays and festivals which animate the country, transporting directly the ancient traditions to the present, to enable them to know not only to new generations, but also to the guests of the village.

Via Delle Conce, Bosa (Oristano)
70.29 Kilometers from Masullas
Serravalle Castle
In the place of arms there is the small church of Our Lady sos Regnos Altos, Palatine chapel of t...

Corte Fiorita Albergo Diffuso
The Sardinian sense of hospitality is one of the ingredients to have a pleasant stay on the banks...

Via Lungo Temo De Gasperi 45, Bosa (Oristano)
70.38 Kilometers from Masullas
Da Muà
The first courses such as the spaghetti with seafood and bottarga, with the real scents of Sardin...

Viale Alghero 58, Bosa (Oristano)
71.08 Kilometers from Masullas
Aghinas
The name Aghinas means "grapes" in the Sardinian dialect and the hotel is located in the historic...

Sail to the discovery of the most beautiful villages guarded in the heart of Sardinia
Discovering the characteristic villages of Sardinia by sailing the stretch of water of the Tyrrhenian Sea with a ferry, in comfort, is certainly an experience that enriches the adventure spirit of the Belpaese lovers. Sailing from Civitavecchia, Genoa, Livorno, Naples, Palermo, Piombino and Trapani visiting the heart of the Mediterranean has never been so simple and practical as now. Just a simple click and the holiday is booked ... the only h...
Continue
Recipe: Myrtle flavoured chicken
Today we will enjoy a dish of the Sardinian tradition from the village of Masullas, the "Caboniscu Ammuttau" or Myrtle flavoured chicken. This dish, suitable for hot summer days, is one of the protagonists of the "Sagra de Caboniscu Ammuttau, binu nieddu and pai indorau" festival, which is held every June the 2nd in the village. This simple and tasty recipe is prepared with very few ingredients such as chicken and myrtle with its berries and leaves.
Continue
The curious story that became a popular poem of a priest who excommunicated an entire Sardinian town
In the small town of Masullas, Sardinia, there was a priest who had goats and sheep, Preidi Antiogu. One day his flock was stolen by one or more unknown thieves. Irritated from the incident, from the pulpit of his church, Preidi Antiogu excommunicated all the inhabitants of Masullas to convince them to reveal the guilty. Swearing and excommunicating to the right and the left, the priest, condemning the vices and sins of his parish, turned to anyone who came to his mind without saving anyone: men, beasts, males and females, young and old, ...
Continue