Share
In the hamlet of the municipality of TortolĂ¬, in Arbatax the Rocce Rosse are the most spectacular example of the village, the setting for the Rocce Rosse Blues music festival. Arbatax is a good starting point to discover the turquoise waters of the Gulf of Orosei by following guided treks along paths and mule tracks that reach beautiful beaches. 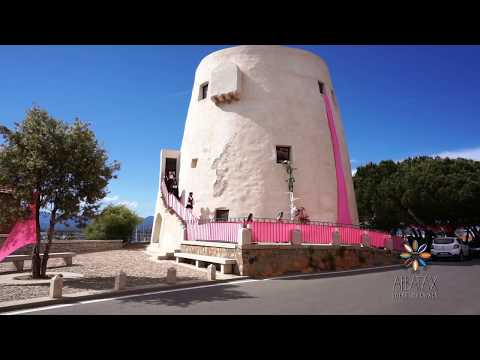 Arbatax is a marine hamlet of the municipality of Tortolì and is situated on the granite peninsula of Capo Bellavista, in the central-eastern coast of Sardinia. The name Arbatax, according to a widespread etymology, derives from Arabic arba at ashar dialect (Arba the áą­ash), which means "14", and that could indicate the fourteenth tower sighting, like all those present in the Sardinian coasts (the area is in fact characterized by a "Spanish Tower" is still well preserved).

Thanks to its strategic position, Arbatax is the port of Ogliastra. An excellent tourist destination to spend holidays with family or friends, Arbatax has a commercial port, used by various naval carriers for the ferry docking which connect weekly the center of Sardinia with Genoa and Civitavecchia.

What to do in Arbatax?
Arbatax is a good starting point for discovering the turquoise waters of the Gulf of Orosei by following guided hikes along paths and mule tracks that reach enchanting beaches. The breathtaking views of Cala Mariolu, Cala Biriola, Cala Sisine and Cala Luna can be reached on foot and back on a boat.

The Rocce Rosse beach, which has always been a symbol of Arbatax, consists mainly of pebbles and rocks and can be easily reached from the town by following the signs for the Port.

Not far from the center, next to the port, there is the small but convenient Arbatax railway station, known to be the final stop on one of the most evocative sections of the Trenino Verde. This locomotive starts from Mandas, in the province of Cagliari, crosses mountains, woods, rivers, countryside and various small towns in Ogliastra and, having reached Arzana at 854 m s.l.m, slowly reaches the sea after traveling 159 km.

The enogastronomic tradition is linked very much to the local folklore and especially to fishing, seen that in country abound fishermen.

Starting from the first dishes we must remember the culurgiones, of local ravioli stuffed with Sardinian cheeses and fresh potatoes and flavored with herbs. Always on the basis of potatoes you cannot taste the coccoi prena, a loaf very tasty and flavorsome.

fish c’è obviously the soup of fish, in addition to various Risotto with seafood caught in the seas neighbors. Passing to the dishes you will find both game, as sheep, porcetto and goat, cooked in various ways, that fish, as prawns grilled and expensive but delicious lobster. Also l’Ogliastra as Sardinia è then famous for its delicious cheeses among which stand out many variations of pecorino cheese.

finally sweets, with macaroons, pirichitti and pardulas king. Typical only of Tortolì è then the pan’ and saba based on dried fruit such as nuts and almonds.

Piazza Europa, 15, Mamoiada (Nuoro)
47.16 Kilometers from Arbatax
Archeology and Territory Museum (MATer)
Mamoiada's MATer is part of the tour of the village, in Sardinia.

Hotel La Bitta
Via Porto Frailis - 08048, Arbatax
Hotel Castello Malicas
The hotel is located in the town centre, a few minutes walk from the old town centre and near sup...

Arbatax becomes a 'red-light' show
Arbatax with red lights. No, this is not a hard film, but the original lighting project that will give further prestige to the famous Rocce Rosse and that will see - it is appropriate to say - the light by summer. The Sardinia Region, in fact, has given the green light to the completion of the works, to the delight of the inhabitants of the Ogliastra village and of all the Sardinians. The Municipality of Tortolì, of which Arbatax is a ...
Continue
Sail to the discovery of the most beautiful villages guarded in the heart of Sardinia
Discovering the characteristic villages of Sardinia by sailing the stretch of water of the Tyrrhenian Sea with a ferry, in comfort, is certainly an experience that enriches the adventure spirit of the Belpaese lovers. Sailing from Civitavecchia, Genoa, Livorno, Naples, Palermo, Piombino and Trapani visiting the heart of the Mediterranean has never been so simple and practical as now. Just a simple click and the holiday is booked ... the only h...
Continue
Discovering 7 villages in Sardinia choosing the right ferry
Summer is almost upon us and the desire for holidays is increasingly felt. Among the most popular destinations in Italy, Sardinia offers innumerable tourist solutions, among which, of course, the Sardinian villages, which with their traditions, cultures and typicality, are the spearhead of a slow tourism, sought and absolutely surprising. Reaching these little jewels furrowing the seas of the Tyrrhenian coast of our boot represents an experie...
Continue
Recipe: Is Arrubiolus
Carnival, after Christmas, is the party that brings joy and warms the heart to our homes. Especially children are having fun, they can't wait for this moment to dress up in their favorite characters: superheroes, princesses, monsters ...But what are the Carnival sweets? The desserts that can be tasted at Carnival are varied and each location follows its own tradition.In Sardinia, especially in the Ogliastra area, Arrubiolus are prepared, fried sweets, which according to the area are known by different names.Delicious and...
Continue
Recipe: the Culurgiones of Ogliastra
A particular type of stuffed pasta typical of Ogliastra. What makes them unique is not only the taste but also their particular ear-shaped closure, specially designed to retain the tasty filling.These ravioli, also called "culurgiònis", "culurzònes" or "culunjònis" in the Sardinian language, were originally prepared only in the family and in many areas represent the dish of Sunday and holidays.A poor dish, born from the agropastoral cuisine of Ogliastra, spread throughout Sardinia with many variations.
Continue
Recipe: Mirto, sips of well-being from the villages of Sardinia
"One enjoys one drinks as much as one's thirst". Thus wrote the great Italian poet Dante Alighieri (1265-1321) in the 20th canto of Purgatory of his universally known Divine Comedy. In the same period, "spirit" drinks began their unstoppable journey towards popularity. The elixir of Sardinia is the Mirto (myrtle), a liqueur with an alcohol content of 30-35 degrees obtained by cold hydroalcoholic infusion or dark purple berries or leaves: with the first one obtains the red myrtle, with the second the white myrtle is there. Both delicious w...
Continue