Share
Known for centuries to all pilgrims who travel the Via Francigena, Altopascio is a small village called the "city of bread", since it maintains the ancient cereal tradition handed down from generation to generation. Its historic center preserves works of considerable artistic value, such as the church dedicated to San Jacopo, built in 1100, the period of greatest splendor for the Order of Hospitallers. 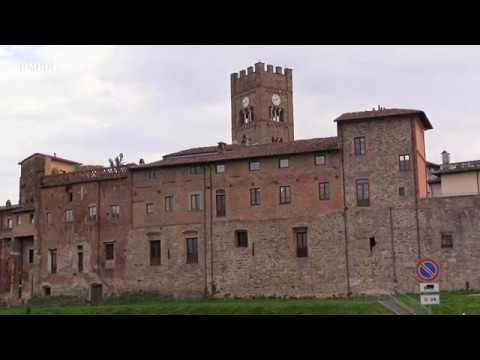 Already inhabited in Roman times, the village of Altopascio rises along Via Francigena, in Tuscany. In this place the Spedale di Altopascio arose, with the purpose of assisting pilgrims and providing for the maintenance of the road itself. The first news of the Spedale "edificatus in locus et finibus ubi dicitur Teupascio" dates back to 1084. The hospital was originally founded by twelve Lucchese or probivir (probably "duodenal chorus" quoted in the vulgar rule), according to tradition a forced pass between the Fucecchio padule and Lake Sesto (now boned) near the Cerbaie forest. The choice was not casual because the need for care and care was especially felt in these places, at that time dangerous and unhealthy.

The walled village of Altopascio, founded in the second half of the 11th century, underwent various renovations, expanding and modifying. The complex included, in addition to the Hospital, the bell tower and the church of San Jacopo. Surrounded by a sturdy walled wall, it looked like a fortress; it was accessed from the hollow door of the Hospitallers, still existing, after crossing a bridge over the Teupascio rio (or Theupascio), which has now disappeared. The Magione of Altopascio was at the beginning a complex articulated around two large courtyards, around which were arranged the premises dedicated to the friars and the reception of the pilgrims. In the 12th century, beside the church, the bell tower was added. At that time there were many testimonies in the current Apollo, especially in Piazza Ospitalieri and in the church of San Jacopo Maggiore. Between the 15th and the 16th century Spedale became the first fortress, then farm, administered by the Capponi family and later by the Medici. In the 14th century, a noble Lucchese ghibelline, Castruccio Castracani degli Antelminelli, became the protagonist of an epic battle held in Altopascio against the Florentine Guelphs guided by Spanish Ramon (or Raimondo) Cardona, captain of the papal guard under John XXII. On September 23, 1325, Castruccio, with the help of the Azzurri Visconti militants, had to accept the battle and confronted the guelphs in the open field. At the first attack was the Florentines, but at the second cavalry they did not make the counterattack and were reduced to barbarism; the Florentine infants were overwhelmed by their knights who had retreated to their neck (Cardona escaped), while the lucchese cavalry cut off all the escape routes. Castruccio was a tremendous victory: the Ghibellines regained Altopascio and several other villages, and all the Guelphs, including the Cardona, were captured. On September 29, Signa fell and on 2 October Castruccio moved to Peretola. On November 11 (San Martino's day), the city of Lucca devoted a triumph in Roman style, in which also the Carroccio conquered to the Florentines, with the unattached bell and the flamenco flip-flop. At the gates of Florence, Castruccio ran, for fun, three pilots, one of the riders, the second of people on foot, and the third of prostitutes. In addition, to celebrate the victory, he coined a coin called Castruccino.

After the two subsequent suppression of Pius II (1459) and Sixtus IV (1587), the Spedale di Altopascio underwent a progressive decline and saw its significance diminish, though it continued its activity of assisting the needy travelers as "recipe" to which Grand Duke Pietro Leopoldo of Lorraine in 1773 definitively abolished him in favor of the hospital of Pescia. But as hospital activity crashed, economic survival was ensured by the farm's anniversaries, which, just because they were fragmented in a vast territory, were less affected by the crisis that struck Tuscany. The Altopascio will continue to survive, backed by the many land-related activities that derive from possessions spread all over Europe, and from the road and transport network of which it was at the center. Altopascio, with his rents and his position on the border between Lucca and Florence, was still very interesting economically and strategically, and will be at the center of the struggles between the civil power represented by the Medici and the religious power, who had his center in Lucca.

They are worth a visit to the Badia of St. Peter and the Church of St. Jacopo Maggiore. The village of Altopascio is mentioned in the story of Italo Calvino's smog cloud. The Altopascio Bread is a must-see, national gastronomic excellence.

As far as craftsmanship is concerned, the ceramic art is active, widespread and renowned, ranging from terracotta production to pottery, iron processing, weaving wicker and straw, stringed weeding with marsh grass and the ancient art of furniture, whereby objects from the Renaissance style to the modern one are made.

The Spedale became so important that, in order to fulfill the duties assigned to him, the Knights of the Tau, the knightly religious order that Altopascio spread throughout Europe, was founded. The name comes from the long black mantle that the friars wore, on which was the taumed cross, shaped like a punch, similar to the Greek tau letter. This cross, of remote origin, according to some, was considered to be the initial letter of the word Christ, but had long been a subject of veneration by the Franciscans, as a symbol of the cross and with the meaning of perfection, as final letter of conclave 'Hebrew alphabet. It should also be remembered that tau also appears in other places of pilgrimage, such as Santiago de Compostela, as a symbol of the taumaturghi and that in the Book of Ezekiel (9: 4) tau is marked as a symbol of salvation. In the case of the Friars of Altopascio, in addition to religious symbolism, it was also a reference to the tools they used, such as hammer and punch, or crutches which involved the support offered to pilgrims.

The Tau knights are probably the oldest knightly religious order in Europe. In addition to the assistance of pilgrims, friars also cared for the maintenance of roads and shipping vessels; They also cared for the construction and maintenance of bridges, which attests to the high technical and organizational level achieved. Their ability is documented by the construction of bridges for the crossing of several rivers along the Francigena Street, such as Arno, Elsa, Usciana, Taro and Arda. The Domus Hospitalis Sancti Iacobi de Altopassu saw his economic fortunes closely linked to the events of Via Francigena. The economic bloom was remarkable already at the end of the twelfth century. The fortunes of the knights prospered thanks to the support of popes and emperors for their philanthropic activity which, over time, transcended the initial one, linked to the pilgrimage and maintenance of Via Romea, assistance to the sick. The Friars of Altopascio, or of the Tau, followed at first the rule of St. Augustine; in 1239 they were assimilated to the rule of St. John of Jerusalem, with pope Gregory IX, who nominates them as "equestrian subordinate orders" of Jerusalem's hospitals. The pope became the custodian of the "benefit", that is, the assets of the institution, and the right of investment of the great master; the friars remained the "giuspatronato", that is the right to present the "commendatario" or patron. In 1459 Pius II dissolved the Order of the Knights of the Tau and ordered the confiscation of the goods, in order to fix them to those of the Congregation of Bethlehem, of its establishment. However, thanks to the resistance of Grand Master Giovanni Capponi, who refused to obey, survived until 1588, when he came to the Order of the Knights of Santo Stefano by Cosimo I de 'Medici, who had the goods in commendam.

the Municipality is part of:
Città del pane
Comuni della Via Francigena

Via Roma, 18, Montecarlo (Lucca)
4.06 Kilometers from Altopascio
Theatre of the Reassured
In the Teatro dei Rassicurati of Montecarlo concerts and performances of prose and amateur theatr...

Via della Cellina, 14, località Querce, Lucignano (Arezzo)
6.87 Kilometers from Altopascio
Cerruglio Fortress
The Cerruglio Fortress is located at the northern end of the Montecarlo Hill, in Tuscany.

Via Fortezza, 4 - 55015, Montecarlo (Lucca)
4.16 Kilometers from Altopascio
Church of San Michele
The St Micheal's Church of the village of Castiglione di Garfagnana, in Tuscany, dates back to th...

Via del Duomo, 1, Barga (Lucca)
32.50 Kilometers from Altopascio
House Museum of Giovanni Pascoli
The Cardoso-Carrara Villa, situated at the Caproni di Castelvecchio, near the village of Barga, i...

From Sicily to Piedmont by foot, in the company of a mule
It would be 2 hours flight from Punta Raisi to arrive in Caselle, Piedmont, but Nicola Winkler preferred an alternative route, a route that will took him 7 months! In the company of Fela, known as Fefe, a mule, Nicola left Palermo last July, and through suburbs and little known routes (sometimes suggested by the same mule), he recently left Altopascio village and the area of the lucchese to resume his journey home. From Siclily to Tuscany, until now, through Basilicata, Campania, Molise, Abruzzo, Umbria a...
Continue