Share
This characteristic village has its roots in ancient Greece, telling stories of ladies and knights, castles and battles because the village belonged to the De ’Monti and Trane families, who took over in the seventeenth century. Both put their hand in the manor, first making it an impregnable fortress and then a noble and charming residence with a Baroque facade. You can get lost in the magic of its historic center, enhanced by the typical courtyard houses that unfold along Via San Nicola. 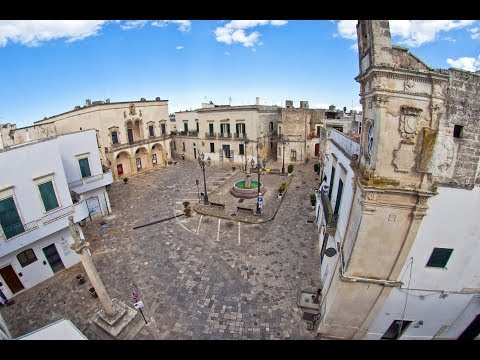 Video by Città aperte in rete

Corigliano d'Otranto (Choriàna Koriàna or in griko, Curiànu in Salento dialect) belongs to the historical region of the Grecìa Salentina, in Puglia. Belongs to a linguistic island of nine villages where it speaks griko, an ancient language of Greek origin.

The grecanico or griko (even grico) is a dialect (or group of dialects) type neo-Greek remainder probably of a wider and more continuous linguistic area ellenofona existed formerly in the coastal part of the Magna Grecia. The greeks today call the Katoitaliótika language (Greek: Κατωιταλιώτικα, Italian "Southern"). The language, written in Latin characters, has points in common with the neogreco and in the meantime the words that are the fruit of apparent influences leccesi or anyway romance. The name of the country is by assonance often derive from the word heart, symbol that appears in the civic coat of arms; or from Corelius, the centurion that would have been assigned the territory in roman times. While probably goes back to the Greek term medieval "χωρίον" (transliterated choríon), respectively at the end etymologically related "χώρα" (chóra), with the meaning of the village, country, Podere, ground or place.

The territory was inhabited by civilization proto-historic, as evidenced by the megalithic remains of mirrors, dolmens and menhirs. The foundation of the country is uncertain and could date back to the period of the Magna Grecia, the roman period or even to the pre-Roman period with the Messapi. From the Roman period remains the urban fabric of the historic center in which, between via Capiterra and via Cavour, is identifiable a rectangle structured living on lots corresponding to multiples or submultiples of the roman actus. The development of the small center contributed to the basilian Monastery of San Giorgio was built in the IX century and in which it was active a school of the Greek language and Byzantine culture which left many codes Greeks, now kept in important libraries. This declined at the end of XV century with the destruction of the monastery of San Nicola di Casole of Otranto, which constituted a Grancia. The first written document in which appears the name of Corigliano dates back to 1192. In 1465 it was purchased by the family de' Monti of French origin, arrived in these lands at the time of the Angevins. Nicola Antonio bought the feud directly from the Royal Court and upon his death in 1480, it passed to the firstborn son Francis, a man of arms, diplomatic and senior official of the court of Ferdinand II of Aragon. By Francesco the feud of Corigliano passed to his son Giovan Battista, which in 1534 obtained from the Emperor Charles V the title of marquis. Between 1514 and 1519, he strengthened the country and expanded considerably the Castle equipping it with powerful artillery, four angular towers, as well as munitions and powerful defensive means. After Giovan Battista, in possession of the feud came, always from father to son, Francesco II from 1537 to 1557, John II from 1557 to 1594, Geronimo from 1594 to 1644 and Giorgio from 1644 to 1649; with Giorgio who died young, completes the marquisate of the de' Monti. Between 1649 and 1651 the feud passed first to the sister Giulia married Francesco Sanfelice and from these to his son Alfonso Sanfelice-de' Monti. In 1651, at the end of contrasts born in relation to the succession of Giorgio de' Monti, the entire inheritance is auctioned and purchased by the wealthy Baron Tutino Luigi Trane.

The Arco Lucchetti, site in Vico Freddo, delimits the inlet of a courtyard and is constituted by three monolithic elements in pietra leccese: an architrave in Sesto lowered well preserved and two uprights corroded in the lower half. The rich decoration of the portal occupies the entire front surface and that of the soffit of the arch. It was constructed in 1497 by the owner of the building, mastro Nicola Robi, who was also the author, as he himself declares in one of the inscriptions that there are engraved. The entire decoration of the arc is a throwback to the medieval models. The arc enters inside a court in which can be glimpsed Latin inscriptions of the sixteenth-century engraved on the lintels of the doors.

The agro coriglianese is mainly cultivated with olive groves. The high permeability of the soil, which absorbs most of the rainfall, determines the absence of surface water courses and the presence on the territory of the articles in order to overcome this shortage, such as tanks and pozzelle.

Along Via Moncenisio you can admire a secular and majestic copy Vallonea Oak (Quercus ithaburensis subs. macrolepis Kotschy), belonging to the family of fagacee and without doubt the arboreal species more suggestive of the flora of Salento. Characteristic of this arboreal species are large acorns from which anciently returns the tannin used, inter alia, in the tanning of hides and skins. It is one of the few surviving copies in Salento. The Oak of Corigliano has a diameter of the trunk of 1 meter and a crown of 20 meters, with a height of about 15 meters. In the grico dialect is known with the name of valani, from the Greek "Balanos" (acorn). The public garden in which it is located is seat, from some years, numerous events linked to culture grica, promoted by the Circolo Culturale "Argalìo" which has its seat in some local ancient constructed right under the crown of the great oak.

Piazzetta Orsini, 16, Galatina (Lecce)
7.38 Kilometers from Corigliano d´Otranto
The Ducal Palace
the Ducal Palace of the village of Seclì, in Salento.

Via Basilica, Otranto (Lecce)
19.91 Kilometers from Corigliano d´Otranto
Aragonese castle
The castle of Otranto, in Salento, gave the name to the first gothic novel of history.

Via Papa Costantino I, Otranto (Lecce)
20.03 Kilometers from Corigliano d´Otranto
Cathedral of Santa Maria Annunziata
The cathedral of Otranto in Salento, preserves the precious mosaic work of basilian monk Pantaleo...

Via Basilica, Otranto (Lecce)
19.91 Kilometers from Corigliano d´Otranto
Gallone Palace
The Palace of Gallone Princes is the most sumptuous cultural monument of the village of Tricase, ...

Via A. Vespucci, località Marina di Novaglie, Alessano (Lecce)
34.99 Kilometers from Corigliano d´Otranto
Sources of Torre Vado
the "sources" of Torre Vado represent, for the inhabitants of Morciano di Leuca in the Salento, a...

Strada Provinciale per Miggiano, km 1, n. 53, Specchia (Lecce)
23.52 Kilometers from Corigliano d´Otranto
Masseria Uccio
Entirely made with stones and tuffs of the place is a testimony of the ancient peasant civilizati...

Via Madonna di Fatima - 73039, Tricase (Lecce)
27.92 Kilometers from Corigliano d´Otranto
Agriturismo Casina Spiggiano
From 1800, for three centuries a country casino, and today, a small farmhouse inserted in a certi...

Recipe: Potato pitta
A typical dish of Salento cuisine suitable for a dinner or an appetizer, to be enjoyed both hot and cold. The pizzaiola potato pitta consists of a kind of rustic two-layer focaccia baked in the oven based on potatoes, cheese, breadcrumbs and eggs and with a filling of fried onion, tomato sauce, black olives and capers.Let's see how to prepare it. Ingredients 1 kg of yellow-fleshed potatoes1 large egg200 gr of grated pecorino / parmiggianoo...
Continue
Recipe: Pasticciotto Leccese
The Pasticciotto Leccese has a long history behind it. Born as a simple makeshift dessert, obtained from what the fantasy suggested, back in 1475, to the Galtina pastry chef, Nicola Ascalone. It is said that on the occasion of the celebrations in honor of St. Paul, the Patron Saint of Galatina, Ascalone did not know what sweet to do for the many pilgrims who came for the party. Finding pastry leftovers with shortcrust pastry and simple custard, he had the idea of covering oval-shaped molds with pastry, pour in some cream and cover them wi...
Continue
Journey through the Villages of the Taranta - part two
And so, since 2007, thanks also to the support of the European Community, to the original municipalities were added three others not really Hellenophones: Carpignano Salentino, Cutrofiano and Sogliano Cavour. All this includes a strip of territory located in the middle of the Salento peninsula, with 60000 inhabitants involved. However, the centers that lost lost the elderly citizens remained to speak the griko. On the other hand, Sternatia, Martignano, Calimera, Corigliano d'Otranto, Zollino and Martano are the most faithful to these ling...
Continue