Share
Monterosso al Mare is the largest, most populated and oldest village in the Cinque Terre. Nestled between sea and mountains, located along the coastal arch of the splendid Gulf of Poets, Monterosso is a country rich in art to discover and boasts important monuments. As a witness of the past, there is the Castle, the Aurora tower overlooking the sea and the medieval tower in the inhabited center in front of the Church of San Giovanni Battista.

A look at Monterosso 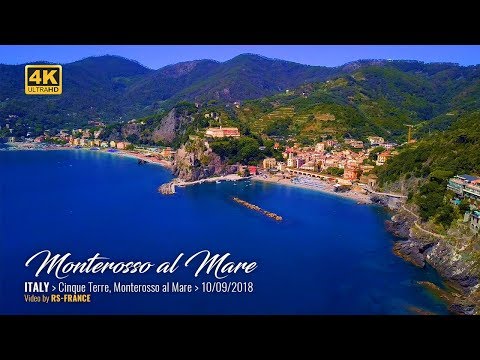 Monterosso al Mare is the largest, most populated and oldest village in the Cinque Terre, dated to the ninth century.
Strait between sea and the mountain, located along the coastal arch of the splendid Gulf of Poets, the town is divided into two parts: the area of ​​Fegina, relatively modern and characterized by a tourist-bathing facility and the old village. In the village, as a witness to the past, there is the Castle, with its elongated walls that includes the round towers, the Aurora tower overlooking the sea and the medieval tower in the town in front of the Church of St. John the Baptist.

The oldest part of the village is located below the Castle, in the vale of the stream Buranco, while over the years the town has developed on the other side of the river and on the level of the inlet, bordered to the east by the Corone peak and from the cliff of the Aurora tower.
Monterosso is a village rich in art to discover and boasts important monuments, including the fourteenth-century church of San Giovanni Battista, in Piazza della Marina, the hub of the village, in front of which stood the medieval Palazzo del Podestà, and the Capuchin convent, erected on the hill of San Cristoforo.

In Fegina you can admire the Giant of Monterosso, an imposing statue of the god Neptune in reinforced concrete, built in the early twentieth century.
The famous poet Eugenio Montale spent, together with his family, the summers of his childhood and adolescence in the famous seaside villa, named "Casa delle due Palme" in Monterosso, whose place was of great inspiration for one of his most famous lyric: "Lemons".

The lemon is a very important fruit for this village, excellent for preparing lemon liquor and anchovies with lemon, in fact at the margins of the village there are numerous lemon gardens and in the areas of Buranco and Morione you can see the beautiful lemon groves.
Every spring in Monterosso we celebrate this precious fruit with the famous Sagra dei Limoni.
One of the main activities that has been taking place for a long time in the village is fishing. Thanks to the particular salinity of the water, the Monterosso anchovies have a particularly pleasant and balanced taste, being at the same time tasty and delicate. Called u pan du ma (the bread of the sea), anchovies are a very common ingredient in Ligurian cuisine, traditionally preserved in salt.
The task of conservation was entrusted to women, who were responsible for cleaning the fish and storing it in clay pots. In fact today we celebrate the third Sunday of September this tradition with the "salted anchovy festival".
Gourmets cannot miss the opportunity to taste the monterossino, a sweet with cream, jam and chocolate, typical of Monterosso while in mid-August you cannot miss the delicious "sweet focaccia" with candied fruit, raisins and pine nuts. The typical wine is the Sciacchetrà liquor, produced with raisins and also to taste the grappa of the Cinque Terre.

Via G M Pensa, 5 - 19018, Vernazza (La Spezia)
2.46 Kilometers from Monterosso al Mare
Chiesa di San Lorenzo
The Church of San Lorenzo is dedicated to the Nativity of the Virgin Mary

Via Rocca, 17 - 19017, Riomaggiore (La Spezia)
7.35 Kilometers from Monterosso al Mare
Via dell'Amore
Via dell'Amore is one of the most important tourist attractions of the Cinque Terre that connects...

Via dell' Amore - 19017 , Riomaggiore (La Spezia)
8.17 Kilometers from Monterosso al Mare
Church of San Giovanni Battista
This church – located in the upper part of Riomaggiore – protects the bourg and its inhabitants

Via Felice Romani, 1, Moneglia (Genova)
16.52 Kilometers from Monterosso al Mare
Byron's Cave
The Byron's Cave is located near the rocks under St, Peter's Church, in the village of Porto Vene...

Via dei Mulini, 1, Portovenere (La Spezia)
17.71 Kilometers from Monterosso al Mare
Doria Castle
The Doria Castle of Porto Venere in Liguria is one of the most majestic military architectures of...

Loc. Montebello, frazione Castagnola 1, Framura (La Spezia)
11.04 Kilometers from Monterosso al Mare
Hotel La Vigna
On the hill of Moneglia, caressed by the wind, among the colours and scents of the Mediterranean ...

Via Provinciale. 72 , Moneglia (Genova)
16.32 Kilometers from Monterosso al Mare
Giada Residence
In an excellent central location with beautiful views of the sea and the square with the sculptur...

Piazzale S. Giorgio, Moneglia (Genova)
17.00 Kilometers from Monterosso al Mare
Sostio a Levante
The Sostio a Levante is an agritourism immersed in the wild nature of an area that is sorrounded ...

Piazza Tarchioni 25 , Moneglia (Genova)
16.56 Kilometers from Monterosso al Mare
Restaurant Bistrot Julia
This bright and spacious restaurant is decorated with refined French taste: you can sit inside or...

Via Luca Cambiaso 1 , Moneglia (Genova)
16.57 Kilometers from Monterosso al Mare
Ristorante Monile
It is really close to the beach, elegant and well-kept.

Monterosso al Mare is present in issue 3 of our digital magazine e-borghi travel.
Read it now!

Landscapes, views and paths through the villages of love
The Cinque Terre are an imaginary heritage of the soul, and for those who love a sensory journey with romantic notes, the Ligurian coast and the villages of Lucignano and Varenna are rich in landscapes, views and paths capable of satisfying the 5 senses and the emotion that synthesizes a unique experience: love.The eastern coast of the Cinque Terre is steeped in the scents of its cuisine of land and sea, which have made it a UNESCO World Herit...
Continue
Delicacies from the Northern and Southern parks
Thick forests, stony ground, lakes and bogs then mule tracks, pastures, valleys and amazing landscapes often with a sea view. The quantity and variety of the Italian parks are unique. One life is not enough to know them well and the same goes for the food specialities you can taste in the villages that are spread around them. There’s nothing better than ending an enjoyable excursion by tasting the local food and buying the best products in the local tiny shops. We haven’t decided to describe a tasting route in this pages by ch...
Continue