Share
Typical Abruzzese village surrounded by the splendid reliefs of the Carseolan mountains, Sante Marie lies on a wonderful hill on the border between Lazio and Abruzzo, is immersed in an enchanted, harsh and wild landscape: Mount Bove, Mount Sant'Angelo and the Mount Faito surrounds it, colored by thick chestnut and beech trees. From its six hamlets, all in bloom from 800 m to 1000 m s.l.m., each glance offers panoramas of rare beauty.

A look at Sante Marie 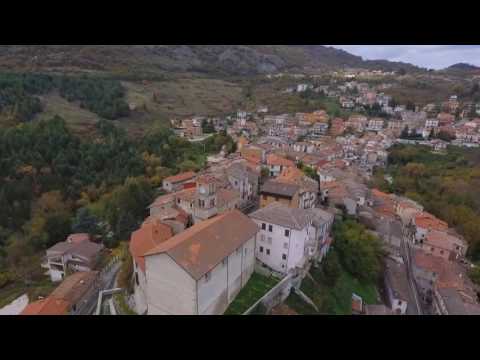 The area of Sante Marie, characterized by a considerable presence of underground water, includes the wonderful Regional Reserve of the Luppa Caves, with its swallow-hole of great speleological interest. The chestnut groves, with their tangible charm, represent one of the spearheads of the area and have always been a precious asset for the local economy and culture (Sante Marie is part of the National Association of the Chestnut City). Another gem is certainly the mineral water of the Fonte della Rocca that flows between cliffs, woods and rocks at 1100 meters of altitude.

The municipal area is full of traces of the long history which characterized it; it will not be hard to catch them: the ancient portals, the graceful churches, the constellations of ruins and palaces.

A vast archaeological area extends on the southern slope of Mount Faito, between Scanzano and Santo Stefano.
The presence of ancient settlements is evidenced by remains of walls and fragments of pottery and other finds discovered during reconnaissance on the area and excavations in the sector.
The ancient settlements occupied a strip of minor slope that extends under the steep and rocky upper slope of the mountain at an altitude of 960/ 1030m s.l.m., articulated in a series of natural terraces placed at different altitudes and of variable depth.
The perimeter of the area occupied by the finds is about a kilometer and a half, the maximum width in an orthogonal direction to the slope lines is of three hundred meters. Colle Nerino is the toponym of one of the hills included in this area, which has recently given its name to the entire archaeological area.

The mountain village of Sante Marie, with its classic medieval oppidum conformation, was located on the border between the Papal State and the Kingdom of Naples: it was, therefore, a land of passage for armies and brigands.
At Palazzo Colelli there is the Museo del Brigantaggio, inspired by the story of the Catalan general Josè Borjes, captured just outside the town on December 8th 1861.

From Sante Marie you can take the Cammino dei briganti, which traces the steps of brigands among the mountains straddling Lazio and Abruzzo; a wonderful trekking ring route where uncontaminated nature is combined with the beauty of small villages with a genuine welcome.

The name of the pretty village, which originally identified a temple dedicated to the Virgin placed on a high place, derives from the Latin altum (castrum) Sanctae Mariae. In the Catalog of the Barons (XII century), the oldest evidence of the existence of the town, this is called Alto Sante Marie; later it is also mentioned in the Papal Bull of Clement III (1188), with the indication of the seven churches present in the area.

With very ancient origins, it has the same history of the nearby Alba Fucens: the latter, in fact, even before being occupied by the Romans, was repeatedly contended between the Equi and the Marsi; one of its buttresses towards Rome was right in the area of Sante Marie, to witness the traces of walls and dry-stone walls, symbols of the fortified villages of ancient workmanship (Castelvecchio and Scanzano).

In the Middle Ages it was part of the feud of Tagliacozzo, first under the control of the Counts of the Marsi, then of the De Pontibus, later of the Orsini and the Colonna. In the post-unification period it was the place where the Catalan brigand José Borjes was captured and killed. Tried and tested by the disastrous earthquake of January 1915, the country was sadly bombed by American planes (20 January 1944) during the Second World War in the erroneous attempt to hit the German command stationed in the villa of the lawyer Mari, a few steps from the Rome-Pescara railway.

In the historic center of the fortified mountain village there is the fifteenth-century Church of Santa Maria delle Grazie, heavily modified during the Baroque, preserving the original portal and bell tower.
Built from the remains of the church of Santa Maria in Luppa (initially located in the small town of Uppa), it presents graceful paintings of saints by the Hungarian Carlo Frjes on the naves. Also noteworthy is the altar dedicated to the Madonna del Rosario from the Baroque period and the Roman school.
In the village square of Santo Stefano there is the Church of Santo Stefano Protomartire, mentioned in the Papal Bull of Clement III. Initially linked to a Benedictine monastery, it was restored for the first time in the 16th century, later in 1903; with a single nave, it stands out for its wonderful classic altar, embellished by the canvas (1800) by the painter from Tagliacozzo Guadagnoli depicting the stoning of Santo Stefano.

Via della Vittoria, 64D, Scurcola Marsicana (L'Aquila)
12.31 Kilometers from Sante Marie
Fortress Abbey
The Fortress Abbey of Subiaco is located on the highest point of the village in the Lazio Region.

Loc. Rocca Calascio, Castel del Monte (L'Aquila)
47.37 Kilometers from Sante Marie
La Presentosa
La Presentosa, on the shores of Lake Scanno, is the ideal place for everyone. It offers hospitali...