Share
Situated in a dominant position with respect to the Sagittarius' Gorges under the mountain group of Mount Genzana, the village of Villalago collects in its territory historical evidences dating back to time peligna and Roman times, as well as an interesting natural environment, formed by the Lake Scanno and from the Sagittarius' Gorges.

The St. Domenico hermitage in the gorges of the Sagittario river 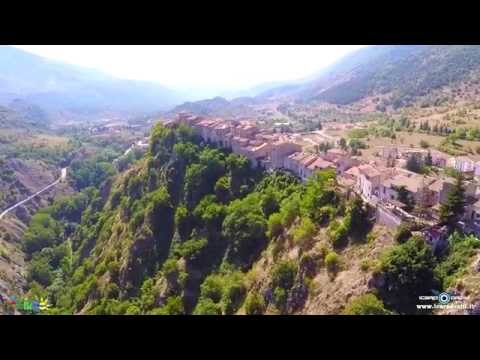 In the locality of San Pietro, where the eponymous Benedectine monastery (XI century-XVI) was found a Roman epigraph, dating back to the II century A.D. in the locality of Villa Vecchia, there were found generic remains of an enclosure of Primitive Age, probably apppartenuti to an ancient fortified settlement of origin Peligna. Between le Contrade Casale and pigsty, finally, the remains of a floor with residues of walls, 26 statues of Hercules, clavate and with leonté (lion skin), and finally a small ox did envisage the presence of a small place of worship dedicated to Hercules, widespread in the Valley of the Sagittarius and in the Valley of Sulmona.

You do not have certain news and documented by the fall of the Roman Empire of the West to the period of the barbarian invasions. During the Longobard period Villalago was annexd to the Duchy of Spoleto. In this period the contado peligno became valvense region. Around the VIII century begins to be mentioned the locality of Flaturno, cited again in 996. Between the end of the X century and the first twenty years of the following century San Domenico abbot lived near Villalago, in the locality of Plataneto or Prato Cardoso where he built an altar in honor of the Trinity.

In the years around the year one thousand the village is mentioned as Villa de Lacu when it was founded by settlers from various areas, as attracted religiously from the monastery of San Pietro in Lake, the remains of which are still visible at about a kilometer north of Villalago. The motivation to call the place Villa de Lacu or Villam de Lacu instead that the Castrum de Lacu would be attributed to the fact that the country was a place not surrounded by walls and open with single structure not only the defensive in Rocca but also political-economic.

After the death of San Domenico and the monastery of San Pietro entered in full possession of the Counts of Valva, whose dominion easurisce in XV century approximately. In 1568 Villalago declared University and autonomous municipality. In this way the village was never subject to the feudalism. With the collapse of the Kingdom of the Two Sicilies was absorbed by the Kingdom of Italy and following the revocation of pastoralism the country was affected by emigration, then it is tried to fill this phenomenon with crafts, tourism and the environment.

Among other feudal families there were the Manso (in 1621), with the famous scholar Giovanbattista, the biographer of the rate. Between the nineteenth and twentieth century resented the influence of bourgeois family of wolves, as pointed out in the name of the main square of the village, entitled to the lawyer Celestino Wolves, died during the first world war. After eversion of the feuds follow the fortunes of the nearby Scanno and, in lower tone, Anversa degli Abruzzi.

Certainly deserve a visit the Hermitage of San Domenico, the parish church of Our Lady of Loreto, the church of San Michele Arcangelo, Norman, the fortress of Villalago, from which you can enjoy a splendid view on the Sagittarius' Gorges, and finally the museum of arts and popular traditions, housed in the old town hall.

Piazza Santa Maria della Valle, Scanno (L'Aquila)
5.20 Kilometers from Villalago
Wool Museum
the Museum of wool of Scanno, in Abruzzo, is hosted at the premises of the former slaughterhouse ...

Piazza Santa Maria della Valle, Scanno (L'Aquila)
5.20 Kilometers from Villalago
Scanzano
Scanzano, part of the municipality of Sante Marie, is one of the most suggestive villages of the ...

Via S. Maria delle Grazie, 26, Anversa degli Abruzzi (L'Aquila)
7.03 Kilometers from Villalago
Wool Museum
the Museum of wool of Scanno, in Abruzzo, is hosted at the premises of the former slaughterhouse ...

Via Calata Sant'Antonio, Scanno (L'Aquila)
5.20 Kilometers from Villalago
Valdevarri
Valdevarri, not far from Sante Marie, is the fraction of spirituality and mystery.

Camping I Lupi
Riviera di Villalago Lago di Scanno - 67030 , Villalago
La Presentosa
La Presentosa, on the shores of Lake Scanno, is the ideal place for everyone. It offers hospitali...

Procession to the hermitage of San Domenico

Feast of Sant'Antonio and the Madonna delle Grazie

The villages on the lakes that fascinated the Grand Tour travellers
Italy was the usual destination of the scions of the European aristocracy. The trip to the beautiful country in the 17th, 18th and 15th centuries was a sort of obligatory destination for poets, painters, cartographers and intellectuals of Europe, to experience their knowledge in the field and enrich their cultural background. The whole country was interested in it, the villages and lake hamlets were the most visited. Here is a small trip from ...
Continue