Share
The village of Fontecchio rises in the suggestive valley of the Aterno in the Sirente-Velino Regional Park and in the territory where the use of the Protected Denomination of Origin of the Saffron of L'Aquila is permitted.

A look at Fucecchio 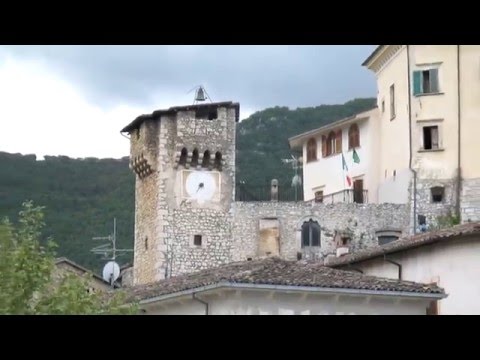 Its historic center preserves the characteristic of a fortified medieval village, with access doors, sections of high walls, towers and majestic palaces, among which stands the mighty fortified palace of the Barons Corvi, from which, according to an ancient tradition, the Marquise Corvi put an end to the long siege of the army of Braccio da Montone, killing the leaders of the assailants with a sledgehammer.
To commemorate the incident, every evening the Clock Tower beats 50 times, as many as the days of siege, thus mixing history, legend, tradition, pride but above all breath of the distant times still imbued in the alleys and walls of Fontecchio.
The clock, considered one of the oldest built in Italy, moves the single hand based on a perfect mechanism of weights and beats the "Italian" hours, that is, six hours in six hours.

Numerous and well visible are the architectural emergencies of Roman type, found in a large part of the municipal territory. Among these we can easily note the base of the temple dedicated to Jupiter where was built the church of Santa Maria della Vittoria (which moreover also preserves an inscription that lists the name of "Aufigenates", an ancient population vestina); the flooring in brick arranged in a herringbone fashion behind the apse of the Church concerning the Convent of San Francesco (probably witness to an ancient artifact of sacral type).

These findings show clearly the importance of this territory in antiquity, constituting a veritable Castrum, rich of testimonies and legends, including one that sees in San Pio the place of last residence (Mountain of Pilate) nothing less that of Pontius Pilate. The discovery in recent times of the Ruins of roman buildings has stimulated further this legend. The continuous incursions by the northern populations within the Roman Empire, susseguitesi from II until all the V century d.C., intaccarono also the territories surrounding the current suburb of Fontecchio, thus inducing the inhabitants of the valley to aggregate and to give life to true inhabited centers.

Around the XI century the small vicus of San Giovanni, San Pietro, Sant'Arcangelo, San Felice and "Fons Tichiae", joined giving life to the "Castrum Fonticulanum"; but, although united for safety reasons, initially these small reality maintained each its own church, founding only around 1080-1095 the town parish church of Santa Maria della Pace, now home parish church of the town. Two are the main references of which Archbishop Antinori, in the eighteenth century, gives us mention: in 1145 Fontecchio is the fief of Gualtiero of Gentile, contributing to the militia of the same with two horse soldiers; in 1360, instead, the country is found to belong to the diocese "Valvense", with four churches (San Pietro, San Biagio, Santa Maria a Graiano and San Nicola).

The history of Fontecchio seems to enter abruptly in vivo in the XV century, when, from May 1425, almost all of the castles of the district of Aquila are cinti siege by unscrupulous mercenary condottiere Braccio da Montone, said "Fortebraccio". If the remaining villages of the district the yield was the natural epilogue of invasion suffered, everything not happened for Fontecchio. Indeed, thanks to the deeds and the courage of its inhabitants, all boldly narrated in De Bello Bracciano Aquilae gesture of the illustrious Girolamo Fonticulano Pico, the country managed to repulse the attack of the mercenary troops, also through the help of another noble condottiere fontecchiano time, hurried to give manforte their fellow citizens: Red Guelfaglione (Family member Benedetti, original place, part of which is also the astrologer of the XVI century Julius Caesar, who predicted the papacy to future Sixtus V).

Fontecchio was severely damaged by the earthquake in L'Aquila in 1703, and later also from that of 2009.

the Municipality is part of:
Comunità Montana Sirentina

Rifugio della Rocca
A mountain lodge with a restaurant.

Loc. Rocca Calascio, Castel del Monte (L'Aquila)
13.01 Kilometers from Fontecchio
La Presentosa
La Presentosa, on the shores of Lake Scanno, is the ideal place for everyone. It offers hospitali...