Share
The village of Pacentro is located inside the Majella National Park, on a hill overlooking the entire Peligna Valley. Nestled on the slopes of Mount Morrone, Pacentro is above all one of Abruzzo's best preserved medieval towns, which thanks to its ancient flavor urban structure immersed in an area of untouched nature, is once again part of the most beautiful villages in Italy. 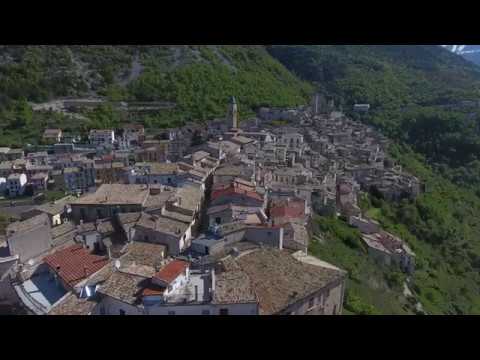 Pacentro has a long history that culminates in the events of the Kingdom of Naples, in the endless disputes of noble feudal families such as the Orsini, the Colonna, the Barberini, to then live the period of decline due to the brigandage and the migratory flow of many villagers in America.

The village is all to be discovered: miniature houses, characteristic narrow streets, buildings attached to each other, very narrow passages connected by small arcades and steep steps, to form a sort of unique labyrinth.

The majestic Caldora Castle, built to protect the town and the valley, dominates the town from above.
The town is gathered around the Piazza del Popolo with the monumental seventeenth-century fountain, once used as a sepulchral urn and the fifteenth-century church of Santa Maria Maggiore or della Misericordia, with the sundial on the portal and the slender bell tower.

A walk through the village allows you to discover other interesting places. I Canaje or the ancient public wash house where women used to go, from every point of the country, carrying on their heads the uaccile features (copper basins).
The Preta tonna, or scandal stone, is a huge sunken stone used as an ancient unit of measurement of grain, on which insolvent debtors were forced to sit naked before passers-by, as a form of public humiliation.

The food and wine proposal reflects the rural and genuine tradition, with a simple cuisine based on beef, sheep and pork, sheep's milk cheeses, and of course extra-virgin olive oil.
Maccheroni alla chitarra with mutton sauce and meatballs, ricotta ravioli, boiled sheep in the “lu cutter”, are just some of the protagonists of the pacentrana cuisine along with the “polta”, a typical dish of the country based on beans, potatoes and cabbage sautéed oil with garlic, oil and chilli and among the events not to be missed, in mid-August there is a festival in honor of this delight: the Polta Festival, ideal for tasting and getting to know Pacentro.

The name Pacentro is also known to be the place of origin of the Ciccone family, from which the pop star Madonna descends.

The Municipality is part of:
I Borghi più belli d'Italia
Comunità Montana Peligna

Via Strada Vecchia, 1, Salle Vecchia, Salle (Pescara)
13.16 Kilometers from Pacentro
Cavallone's Cave
The Cavallone's Cave is located in the Taranta valley, in the heart of the Majella National Park,...

SR479, 2, Anversa degli Abruzzi (L'Aquila)
16.71 Kilometers from Pacentro
Valdevarri
Valdevarri, not far from Sante Marie, is the fraction of spirituality and mystery.

67067 - Valdevarri , Sante Marie (L'Aquila)
65.71 Kilometers from Pacentro
Tubione
Tubione, part of the municipality of Sante Marie, is a tiny village with seven residents.

67067 Tubione, Sante Marie (L'Aquila)
61.69 Kilometers from Pacentro
Norman Castle
The Norman Castle of Anversa degli Abruzzi is placed in a dominant position in the historic cente...

Via Castello, 67030 , Anversa degli Abruzzi (L'Aquila)
16.91 Kilometers from Pacentro
Scanzano
Scanzano, part of the municipality of Sante Marie, is one of the most suggestive villages of the ...

Camping I Lupi
Riviera di Villalago Lago di Scanno - 67030 , Villalago (L'Aquila)
11.34 Kilometers from Pacentro
La Réserve Hotel Terme
It is the ideal place to relax, get back into shape and regenerate.

Loc. S.Croce, 65023, Caramanico Terme (Pescara)
11.98 Kilometers from Pacentro
La Presentosa
La Presentosa, on the shores of Lake Scanno, is the ideal place for everyone. It offers hospitali...

Recipe: Sagne spicy, an Abruzzo specialities
The Sagne spicy is a speciality of Abruzzo born at the time when it was enough a little water, flour and a pinch of imagination to invent a simple and tasty first course. Let's find out how to prepare it: Ingredients for 4 people: Durum wheat flour 300 gr Cloves of garlic 3 Mature tomatoes 1 kg Hot pepper 1 Grated Pecorino cheese to taste Basil to taste A piece of red pepper Evo oil 90 ml Salt and water pepper*...
Continue
Summer 2020, Travel in Italy: the villages, ideal destinations to visit in the post-coronavirus
From today, May 4, the restrictive measures imposed by the government during the lockdown period will begin to be eased. Many regions, for example, will allow you to move within your territory to walk to the sea or to the mountains. These will be the first steps for a gradual recovery to normal, while respecting the distance and the use of masks to block the spread of the covid 19. In the meantime, less than two months are left at the beginning of summer 2020. "Travel in Italy" it is the slogan that recurs most often in the media, as well...
Continue