Share
The village of Gradisca d’Isonzo, not far from the Slovenian border, from which the name derives, is a fifteenth-century fortress built by the Venetians located on the right bank of the Isonzo. It differs from other villages, as it is made up of wide streets that cross at right angles to each other and this is because the movements of the soldiers defending the village had to be rapid. 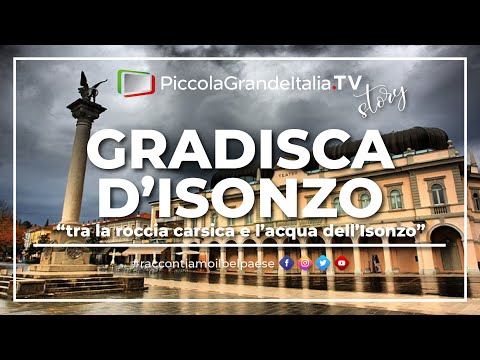 Gradisca d’Isonzo, in the Friuli plain, is considered one of the most beautiful villages in Italy. Not far from the Slovenian border, from which the name derives, Gradisca is a fifteenth-century fortress built by the Venetians located on the right bank of the Isonzo.The toponym of Gradisca deriving precisely from the Slovenian gradišče, or "fortified place", over time has been transformed into a town, fort or castle.

Arranged in a fortified historic center, enclosed by walls and six stone bastions to protect the Castle (Torrione della Calcina, Torrione della Marcella, Torrione della Spiritata, Torrione del Portello, Torrione di San Giorgio, Torrione della Campana) and the facades of the baroque palaces of the center, Gradisca reveals its noble and fighting past, to which Leonardo Da Vinci contributed to face the invasions of the Turks. Walking through the village, starting from Piazza dell'Unità, you will see historic buildings and monuments to be discovered easily on foot.
Right in the center of the square is the Monument to the Redemption, opposite the municipal theater named after its reopening "New municipal theater". The monument consists of a tall column with bas-reliefs dedicated to various stages of Gradiscan history, on which rests a bronze lion of St. Mark, symbol of the Republic of Venice. Continuing along the streets of the village, the most important religious buildings meet: the Duomo and the Church of the Addolorata.

The village of Gradisca differs from the other villages, since it is formed by wide streets that intersect at right angles to each other and this because the movements of the soldiers in defense of the village had to be rapid. Among the noble palaces overlooking the grid, it is possible to admire the Rococo-style Palazzo de Fin-Patuna, whose facade is in ocher, known for having hosted Napoleon during the French occupation in 1797. In front of it there is Palazzo Strassoldo, with a sober, severe and massive appearance, built to house Captain Riccardo di Strassoldo, who led the troops in 1615 against the Venetians.
Along via Ciotti is Palazzo Torriani, which houses the Documentary Museum of the City and the Luigi Spazzapan Contemporary Art Gallery. Finally, in Via Bergamas, you can admire the Palazzo de Comelli – Stuckenfeld.

Being a country of passage for different peoples, the typical recipes of the village are different. Among the most famous: goulash and plum gnocchi. The DOC wines of the Collio Isontino cannot be missing on the gradiscane tables: in particular, the Refosco and the Merlot. Among the whites the Pinot and the delicious Picolit deserve to be tasted.

SS14, Duino-Aurisina (Trieste)
15.33 Kilometers from Gradisca d’Isonzo
Antonio the Dinosaur
at the former limestone quarry located between Duino and the village of fisherman was found the s...

Sentiero ad anello, Staranzano (Gorizia)
15.80 Kilometers from Gradisca d’Isonzo
Duino Cliffs Natural Reserve
The Reserve extends along a strip of territory rich of tracks that bear witness to the transition...

Foresteria, 39, Duino-Aurisina (Trieste)
16.71 Kilometers from Gradisca d’Isonzo
Devin Castle
The Devin Castle is situated in the village of Duino, in Friuli Venezia Giulia.

SS14, Duino-Aurisina (Trieste)
17.18 Kilometers from Gradisca d’Isonzo
Grado Archaeological Area
the archaeological area of Grado is located in the historic center of the village, in Friuli Vene...

Via Grado, 1, Fossalon di Grado, Grado (Gorizia)
20.11 Kilometers from Gradisca d’Isonzo
Sanctuary of Barbana Island
The Sanctuary is located on the island of Barbana, in the Grado lagoon.

Gradisca d’Isonzo is present in issue 8 of our digital magazine e-borghi travel.
Read it now!

Friuli-Venezia Giulia, a thousand border tastes
In Friuli-Venezia Giulia, on the very North-East of Italy, the middle European, the Venetian and the Slavic cultures come together. Like the art and the traditions, the tastes from this area are a combination of different cultures that produce many unique products and recipes that are influenced by the landscapes, the environment and the climate. There are some typical products that have been awarded with the DOP (protected Designation of Orig...
Continue
Recipe: Jota, the tasty minestrone of the Friulian villages
In the past, the jota was based on essential and protein ingredients: sauerkraut, beans and cornmeal. The only concession to the throat was given by the pestat, a mixture of lard and aromatic herbs. Nowadays this typical cuisine cooked in the villages of Friuli-Venezia Giulia - also present on the tables of the provincial capitals - is served all year round and, depending on the climate, hot, cold or lukewarm, usually accompanied by wine glasses of the Carso that enhance its flavor. The jota also represents the pleasure of meeting and lig...
Continue