Share
Located in the Genoese west, Pegli is a beautiful seaside village that can be easily reached from the center of Genoa. In ancient times along the medieval road that connected Genoa with the countries of the Riviera di Ponente, prestigious suburban residences began to rise for some wealthy Genoese patrician families, and in particular for the Lomellini family, among them the villa Lomellini Rosa, in today's Modugno avenue. 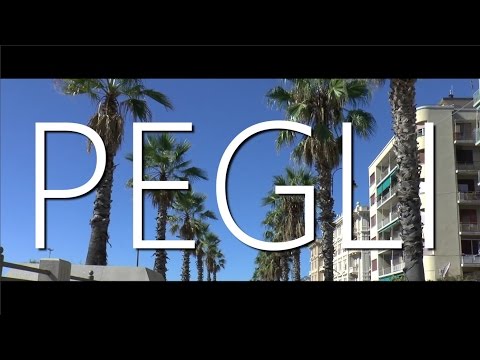 Pegli (Pêgi, in the Ligurian dialect) is a seaside village of the Ponente Genovese, in Liguria. Despite as all the Ponente Genovese has been affected by industrial development after the Second World War, has retained most of its features of environmental merit that they had done in the past one of the destinations of favorite residence of noble and wealthy bourgeois and today is the residential district of greater merit in the Ponente.

Its name derives from the ancient "Pyla Veituriorum" founded, as others in the area, from the Ligurian tribe of Veturii. The term "Pyla" could derive from the Greek "pylae" (pitch between the mountains), with reference to the ancient paths that from the shoreline sailed up the valley of Varenna then crossing the Apennines, directed toward Piedmont.

The ancient Pyla Veituriorum was founded by the Ligurians Veturii at the outlet to the sea of Val Varenna, at the beginning of a path created spontaneously along the mountainous ridges toward Le Capanne di Marcarolo, in antiquity important trading center. Until the sixteenth century the country, although quite populated, especially by fishermen and farmers, should not have a particular importance, neither commercial nor as a place of stay of the patrician families; it was equipped with a small harbor, suitable for the boats of the fishermen but not for the mooring of vessels of large size.

From the middle of the sixteenth century along the medieval road linking Genoa with the countries of the Riviera di Ponente, improperly called "Via Antica Romana", sprang up prestigious suburban residences of some rich patrician families the Genoese, and in particular of the family Lomellini, present at Pegli with numerous properties, among which several buildings, some of which are still intact today. Among these the Villa Lomellini Rosa (in the current viale Modugno), the villa Lomellini-Banfi, Palazzo Lomellini of Porticciuolo (today Mediterranèe Hotel) and the Villa Lomellini Rostan to Multedo.

In that same period the Lomellini, who had obtained in granting the island of Tabarca, overlooking to the Tunisian coasts, there did transfer almost three hundred families, for the most part pegliesi who dedicated themselves to the coral fishing. The presence of "tabarkins" on the island lasted till the half of the XVIII century, when their descendants had to relocate to Carloforte, in Sardinia, where still today we talk the tabarchino, a variant of the Ligure derived from the ancient dialect pegliese. The Ligurian Republic under Napoleon, annexd in 1805 to the French Empire, in 1814, as a result of the decisions of the Congress of Vienna passed to the Kingdom of Sardinia, and with it also the municipalities of Pegli and Multedo.

From the mid-nineteenth century and up to the first world war the aristocrats and members of the high bourgeoisie, Italians and Europeans, spent the winter season in villas and hotels, while during the summer the rich families in the north of Italy went Pegli for bathing in the sea. The presence of political personalities, nobles and artists of fame ratcheted in that period the prestige of the town. Among the most illustrious guests include the princes of Germany, exponents of the house of Savoy and writers such as George Sand, Alfred de Musset, August Strindberg, Franz Kafka, Arrigo Boito and others.

The Municipality is part of:
City of Art and Culture CIDAC
City and world heritage sites Unesco

Pegli Naval Museum
The Pegli Naval Museum, in Liguria, is hosted within the sixteenth-century Villa Doria Centurione.
Piazza Cristoforo Bonavino, 7, località Pegli, Pegli
Ligurian Archeological Museum
The Ligurian Archeological Museum is located in Pegli, in Liguria, inside Villa Durazzo-Pallavicini.
Villa Durazzo-Pallavicini, Via Ignazio Pallavicini, 13, località Pegli, Pegli
Church of Sant'Antonio
The church of Sant'Antonio in Boccadasse, in Liguria dates back to the beginning of the XVII cent...

Passeggiata Anita Garibaldi, 36, Genova (Genova)
18.28 Kilometers from Pegli
Parish Church of San Michele
The church of S. Michael is one of the first appearances built on place. The distance from the se...

Piazzale S. Giorgio, Moneglia (Genova)
57.47 Kilometers from Pegli
Hotel La Vigna
On the hill of Moneglia, caressed by the wind, among the colours and scents of the Mediterranean ...

Corso Libero Longhi 23 c/d, Moneglia (Genova)
57.73 Kilometers from Pegli
Restaurant Bistrot Julia
This bright and spacious restaurant is decorated with refined French taste: you can sit inside or...

Recipe: the Cappon Magro, aromas and flavors of Liguria
Secluded villages with works of rare beauty and, in the caruggi, the aromas and flavors of the genuine, simple and imaginative gastronomy of the region. Ancient recipes linked to the secrets of the sea and to the generous gifts of the earth, which today culminate with skilful reinterpretations of tradition, even by starred chefs. The Cappon Magro is an icon among the Ligurian recipes and represents the union between the sea - fish and shellfish - with the land, the fresh and tasty vegetables. A dish that has become one of the symbols of t...
Continue
Beigua Park to be immortalized, weekend photography trekking
Liguria is a land of contrasts, all to be explored. In fact, in addition to the seaside destinations, mountain areas rich in charm and natural beauty also deserve great attention. As in the case of Beigua Regional Nature Park, the largest protected natural area of ​​Liguria, which jealously holds the geological history of this region. Everything speaks in Beigua Park, UNESCO Heritage since 2015: every rocky outcrop, minerals, fossil fuels and spectacular shapes molded uninterrupte...
Continue