Share
Due to its particular position, Vieste is an excellent starting point to discover the wonderful land of Gargano and an ideal destination for those seeking relaxation and golden sandy beaches. In addition to the beaches, the historic center, rich in culture and history, also deserves interest. The verdant coast of the Gargano, one of the most beautiful in the world, offers the most attentive and curious gaze natural arches, such as that of San Felice, and splendid natural cathedrals, the sea caves.

A look at Vieste

Li, among the narrow streets of Vieste where yo...
Luciana Nocciolino - e-borghi Community 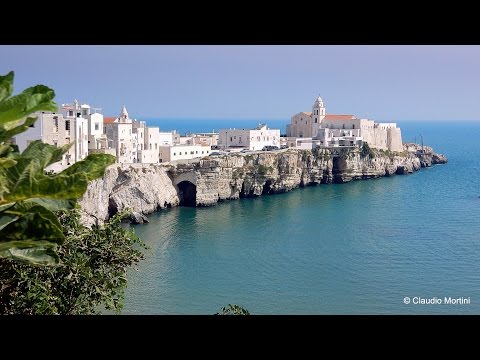 Vieste (Vìst in the local dialect), "the Gargano Pearl", is the eastern hamlet of the namesake promontory. The particular urban relocation of Vieste is linked to the karst nature of the Gargano Promontory, characterised by rocky layers often eroded by the sea.

The housing cluster rises on a small rocky peninsula, with a more or less symmetrical form, typical for its three bays separated by two heads: Punta di San Francesco, oriented to the east, and Punta di Santa Croce, oriented to the north. The first one is steep, raised and harshly rocky: here you will find the medieval centre, since this part of the peninsula offered the best safety requirements. In this part, rich of alleys, staircases and arches, you can find the most prestigious historical buildings (Church of San Francesco, cathedral). The second one, instead, which is lower, began to expand only around the XIX century. In this part you will find the port of Vieste, still important for fishing and for the maritime traffic towards the Isole Tremiti, Croatia and Manfredonia.

The numerous archaeological sites and findings discovered in various areas near the inhabited core attest the population of the territory of Vieste since the Palaeolithic. This was surely due to the mild climate, to the different sources of drinking water, to the fertile soil with an abundance of fruits, the variety of game meat and the abundance of fish in the various bays along the coast. Between the main buildings, as in other Apulia villages, we can find the Romanesque Cathedral and the Castle, both taken care of by Frederick II after the Venetians caused great damage to the town. In the vicinity of these buildings there is Porta ad Alt, characteristic for its acute arch, that was the main entrance of the city.
At the beginning of the Castle beach, the one to the south of the centre, a monolith of about 25 meters high called Pizzomunno, rises as the symbol of the Gargano Pearl, almost like is guarding Vieste. Along the coast you can admire some Trabucchi, ancient fishing installations, provided with long wooden arms that support a fishnet.

This is one of the historical elements that distinguish the Gargano area from the rest of the Apulia region. The feast of S. Maria di Merino, on the 9th of May, is one of the most important celebrations in the local landscape. Among the most characteristic culinary products you can try the stuffed aubergines, fish soup (ciambott), the k'lustr (Christmas fried sweets covered with honey and almonds), the calzungidd (sweets stuffed with chickpeas and cocoa), the castaggnedd (biscuits with almonds and cocoa), the mustazzul (biscuits with boiled must and cloves), the taradd nglppet (iced biscuits), chickpeas jam, pettole, troccoli pasta, marinated sundried tomatoes, orecchiette with turnip tops and fennel or white wine taralli.
Even the local traditional cheese is very appreciated, especially the varieties produced with podolic cows milk (caciocavallo cheese) and Garganic goat (cacioricotta caprino).

The agriculture resource is closely linked to the cultivation of olive trees; Ogliarola Garganica, Leccino and Coratina are the most common cultivars of cultivated olive trees. In addition to the olive oil, among the major agricultural products, they produce oregano and Viestani tomatoes (an egg shaped variety, less long than the San Marzano one). The selection of fish and seafood is also of great quality.
The surroundings of Vieste are distinguished by the presence of several tourist attractions of enormous geographical and historical interest. Vieste has always been a prominent landmark for departure and arrival to the Isole Tremiti, located not far from the north of the coast.

This is exactly the same thing for the Foresta Umbra, which constitutes an invaluable biological heritage for Southern Italy. The paleochristian necropolis La Salata, situated at east of the town, is one of the most ancient and characteristic of the Mediterranean basin. The Sanctuary of Santa Maria di Merino is located not so far away. The caves carved by the sea in the Gargano calcareous rock, generated cavities and rock formations of the most bizarre and varied forms.
The Pizzomunno could be a good example of this. The same goes for the Arco di San Felice, dug out from the erosion on the road to Pugnochiuso, south of Vieste.
The caves are the result of karst phenomenons, but also the corrosive action of the sea water and the wind gave an important contribution to this. Between the caves we remember the grotta sfondata, the Due Occhi, Rotonda, Pipistrelli, Serpente, Viola and the Smeralda.

The Municipality is part of:
Borghi Autentici d'Italia
Città dell'Olio

The Church of Santa Maria Assunta
The Church of Santa Maria Assunta is located in one of the highest areas of the village of Vieste
Via Vescovado, 15, Vieste
Castle of Vieste
The castle, that dominates with its imposing the medieval district is traced back to the second h...
Via F. A. Nobile, Vieste
Merinum Necropolis
The ancient Paleochristian necropolis of salted cemetery complex to the east of the town, located...
Strada Provinciale 52, Vieste
Church of Sant'Elia
The church of Sant’Elia is the mother church of Peschici

Largo Chiesa Madre - 71010, Peschici (Foggia)
15.01 Kilometers from Vieste
Church of Purgatory
The church of the Purgatory rises in Piazza del Popolo, the historical center of Peschici.

Piazza Del Popolo - 71010, Peschici (Foggia)
15.41 Kilometers from Vieste
Castle of Peschici
The castle of Peschici, built by the Normans, was built to protect the Gargano lands from raids.

Via Castello - 71010 , Peschici (Foggia)
15.46 Kilometers from Vieste
Castrum Vici
The norman "castrum Vici" of Vico del Gargano in Puglia, dates back to the XI century.

Strada Comunale dei Mulini, Vico del Gargano (Foggia)
18.81 Kilometers from Vieste
Prior's Tower
The Palace and the Tower of the Grand Prior of Alberona, in Puglia, dates back to the XII century.

Piazza Civetta, 11, Alberona (Foggia)
100.87 Kilometers from Vieste
The house of the Captain
This is one of the historic buildings more interesting in the village of Faeto. Therein lies the ...

Via Arco Ducale, Pietramontecorvino (Foggia)
95.13 Kilometers from Vieste
Norman Tower
From the top of the Normar Tower you can enjoy a wonderful panorama upon the village of Pietramon...

Lungomare Enrico Mattei, 69-70, Località Scialara, Vieste
B&B Residenza Collina dei Pini
The residence is situated on a hill at about 1.5 km from the coast of Vieste, on the Gargano.

Via Marie Petit Pierre, 1/7, Faeto (Foggia)
104.81 Kilometers from Vieste
Cantina Il Trappeto
The surrounding area is the basic ingredient of the genuine dishes of the Casentino and Tuscan tr...

Via Casale, 168, Vico del Gargano (Foggia)
2121.13 Kilometers from Vieste
Punto & Pasta
In the village centre there is this pastry shop-bakery that produces orecchiette, cavatelli, home...

Vieste is present in issue 3 of our digital magazine e-borghi travel.
Read it now!

The Gargano Park, the triumph of biodiversity

A romantic journey through the villages of Puglia
Puglia is a region full of magical villages, an ideal destination where you can decide to spend a romantic weekend. There are many destinations that you can recommend and considering that each place is different, peculiarities and curiosity will guide you in the choice that best suits your taste. Each village is rich in historical, artistic and cultural heritage all to be discovered. Let's start with the first one. Polignano a Mare in the p...
Continue
Villages between Puglia and Irpinia
Foggiano and Irpinia. You said everything, you said a lot. Think of the province of Foggia. Very extensive. From the countries immediately after the Bari and the Bat, here already Cerignola, historical and big agricultural reality, the city of the trade unionist Di Vittorio. From here we go inside, going towards Candela and the Subappennino Dauno, 49 villages set in the not very high mountains of this particular southern and Apulian mountain ...
Continue
Foliage, what a passion. The Umbrian forest, a few kilometers from Vieste and Vico del Gragano.
One of the best things of the autumn season is the colors of the surrounding nature: ocher, vibrant reds and many orange shades that embrace the ever-green, letting them swirl in the surrounding landscape. Today we have thought to share a magical place with us, perfect to enjoy the phenomenon of "foliage", the effect of the first cold red leaves. We are in the so-called "Umbrian Forest" on the Gargano promontory, within the Gargano National P...
Continue
Itinerary: a weekend in Gargano between Vieste and Vico del Gargano
Headquarters of the International Fair of Agriculture and Zootechnics, Foggia is an important centre of southern Italy located in the heart of Tavoliere delle Puglie, the largest Italian plain after the Po Valley. The weekend in the lands of Gargano starts exactly from Foggia, the third largest city in Puglia, as well as an important agricultural and commercial centre. Just outside the city, there are the vast cultivated stretches that run ...
Continue
The legend of the love between Cristalda and Pizzomunno
We are in Vieste, a beautiful village of the Apulia coast, where the crystalline sea kisses the sand of the beaches and the warm colors of sunset magically transform this earth, making it the ideal place for a heart breaking love story. Walking along the coast, perhaps hand in hand with the beloved person, we can't help remaining fascinated with the imposing white monolith known as Pizzomunno. 25 meters high, the Faraglione of Pizzomunno, stands out on the coast, proud and powerful, a presence in the dark nights, on whic...
Continue
Apulia is the most booked region for summer 2017
With this boiling hot weather, we immediately think about summer holidays, imagining to be relaxing on white beaches and to be immersed in fresh and crystal-clear waters. After all, holidays are usually booked with great advance for so many reasons; therefore the desire of finally being at our so-longed-for destination is even bigger. According to the Italian leading website for holiday rentals Casevacanza.it, 23% of Italians have already booked their home for the holidays with a 90 days advance before th...
Continue