Share
It is a small agro-tourist center located north-east of the Gargano. Very close to Peschici, Rhodes is perched on a promontory overlooking the sea. Called as "Giardino del Gargano" for its extension characterized by the presence of numerous citrus groves, fig trees, olive trees, carobs and pines which represents a very varied landscape. Like all seaside towns, Rodi del Gargano is typical for the fishing culture, in fact there is an ancient fishing village, which still practices all types of peaches. 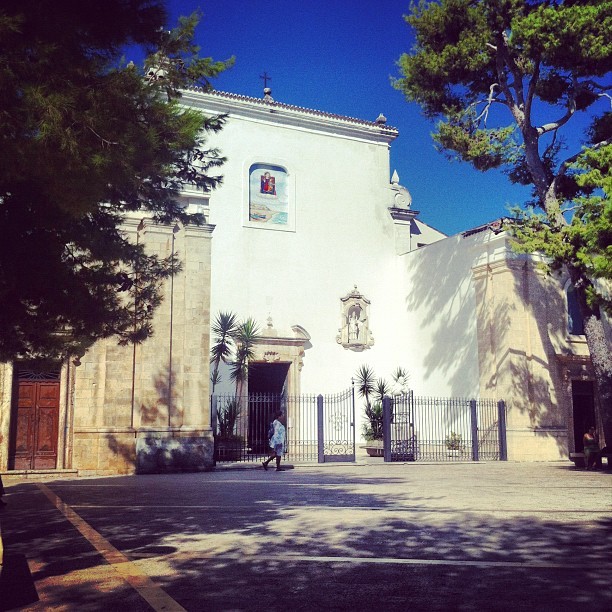 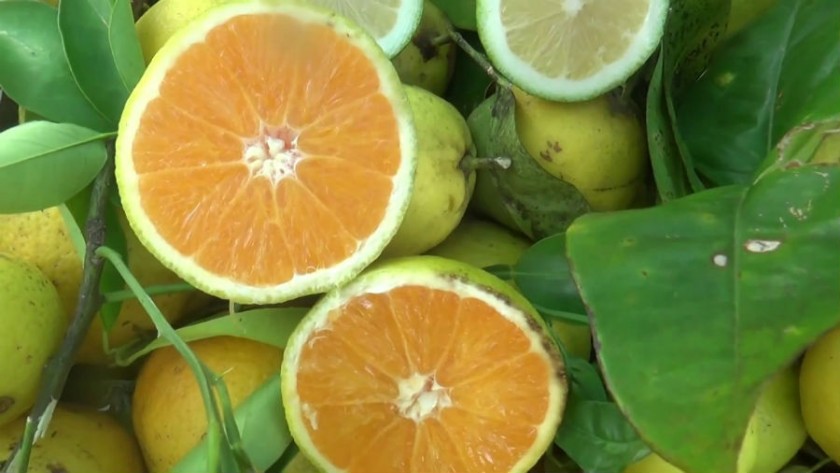 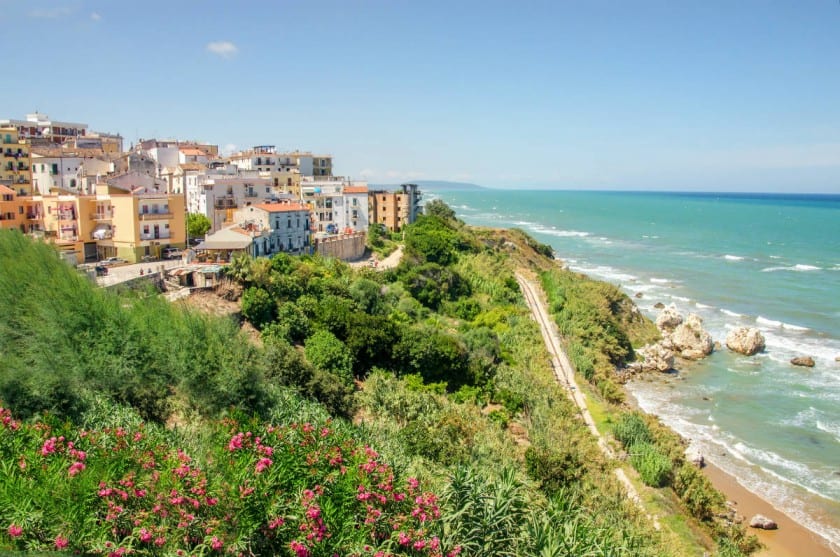 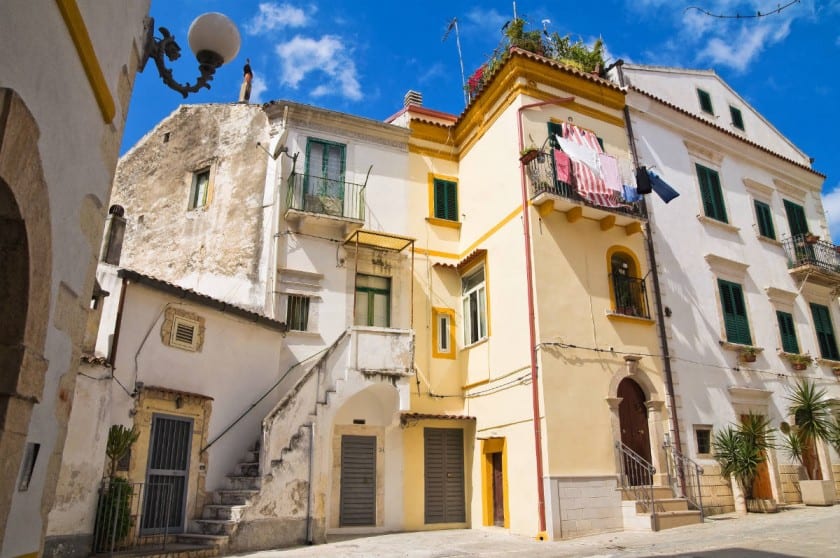 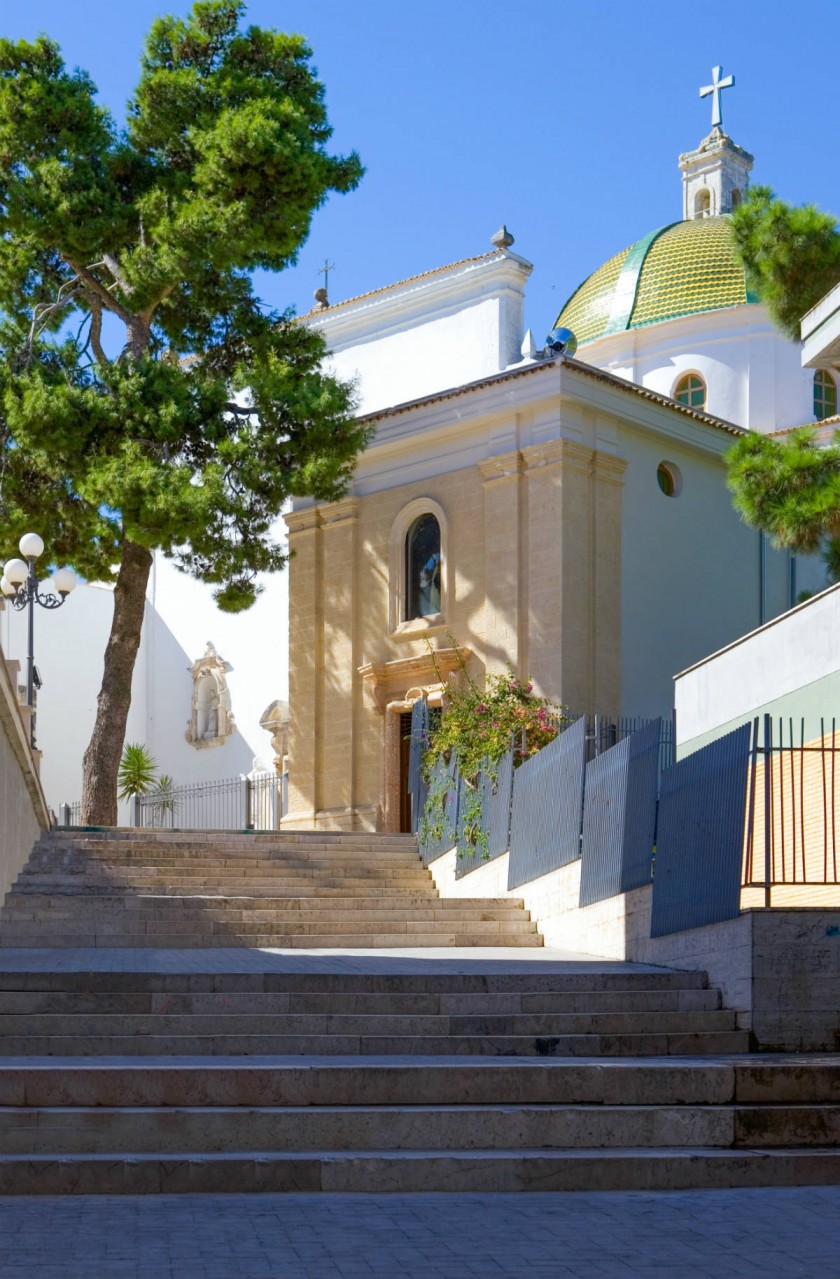 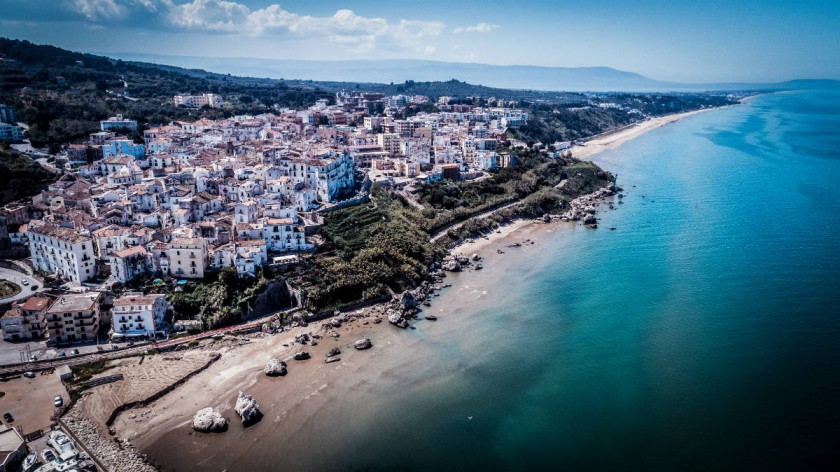 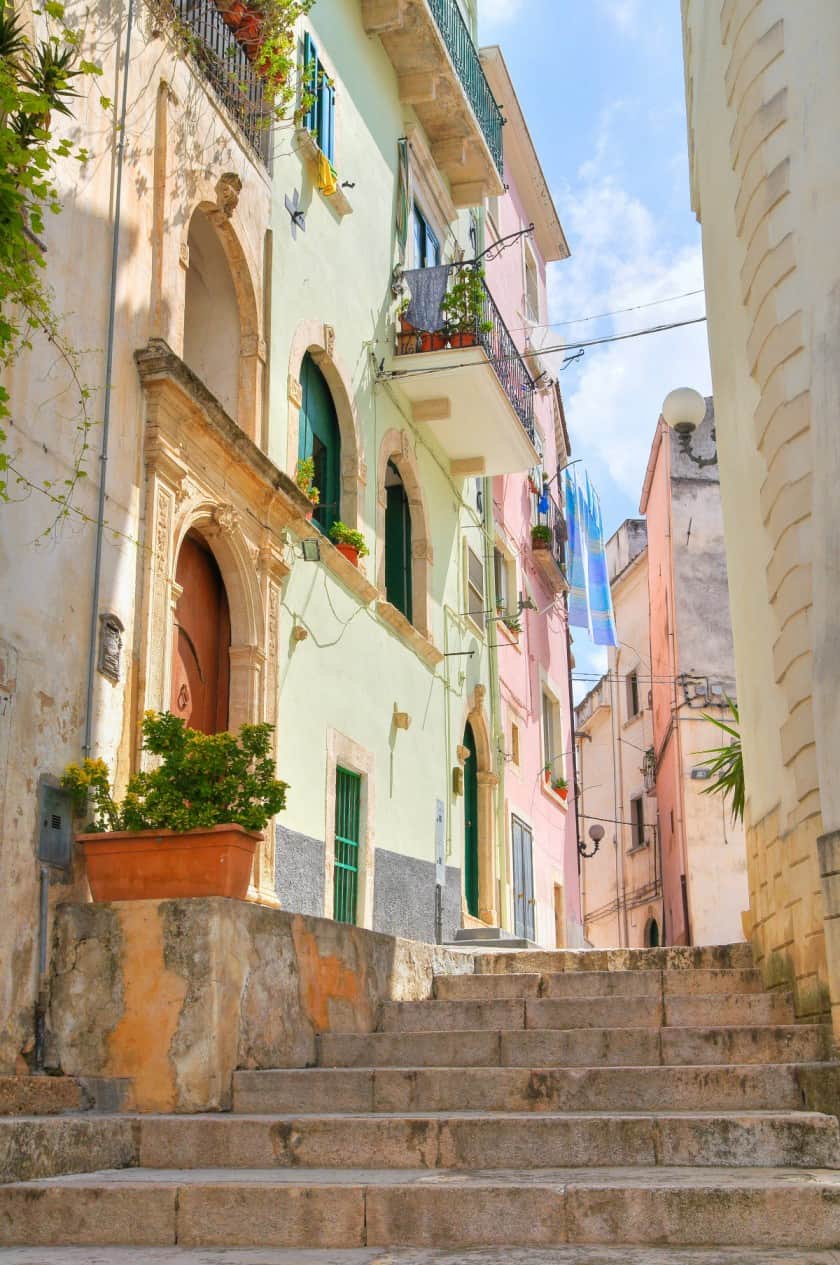 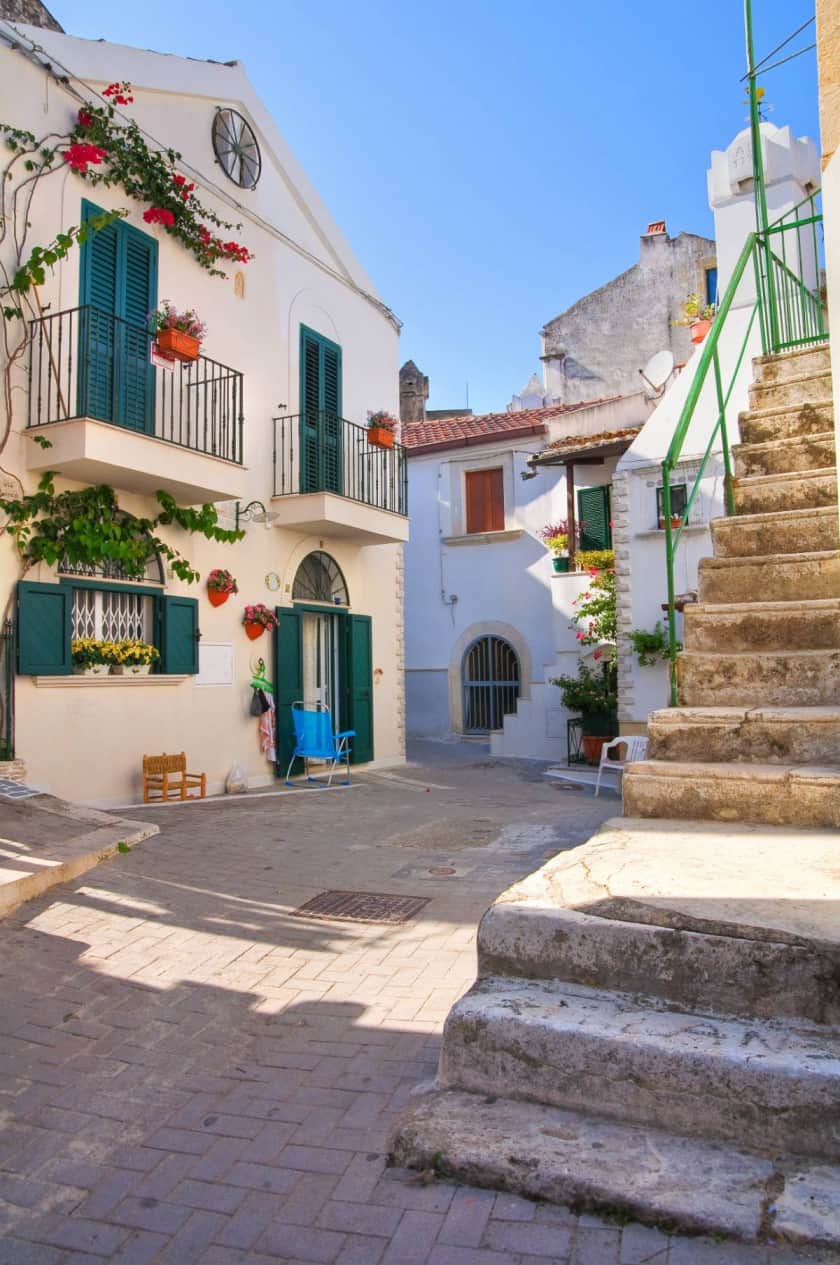 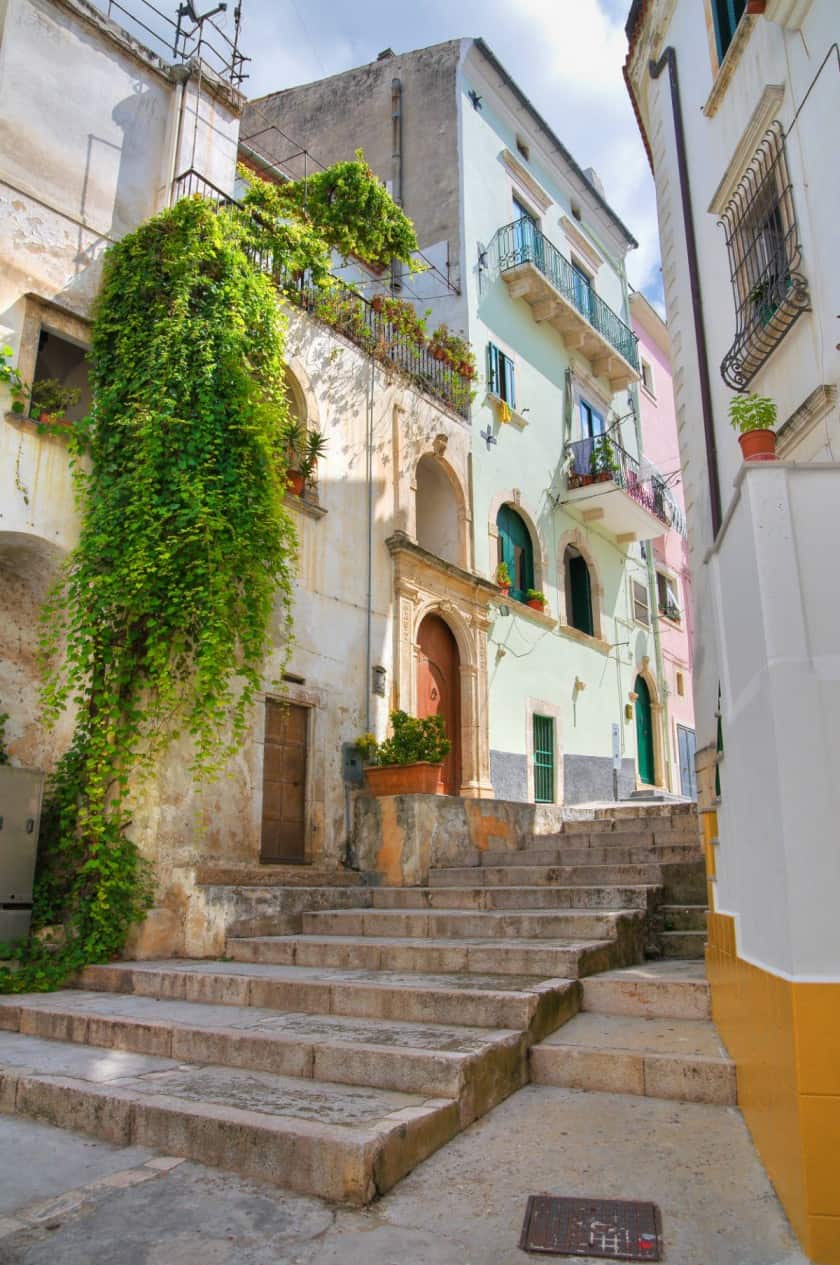 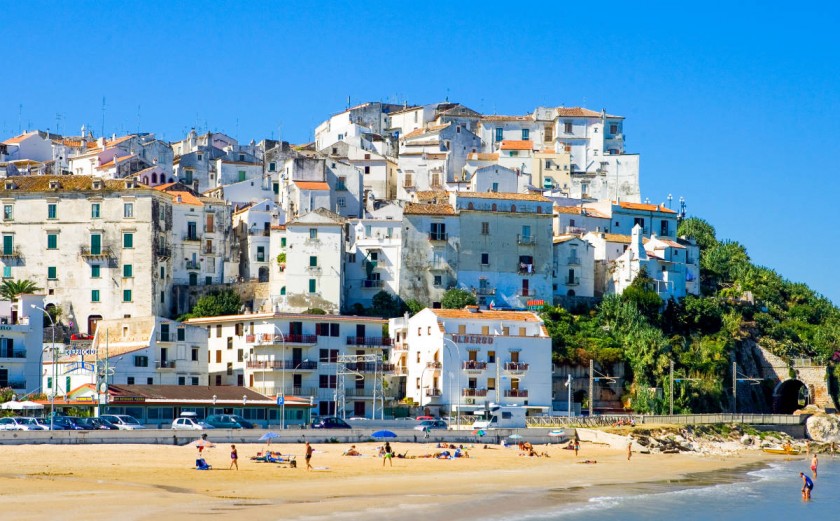 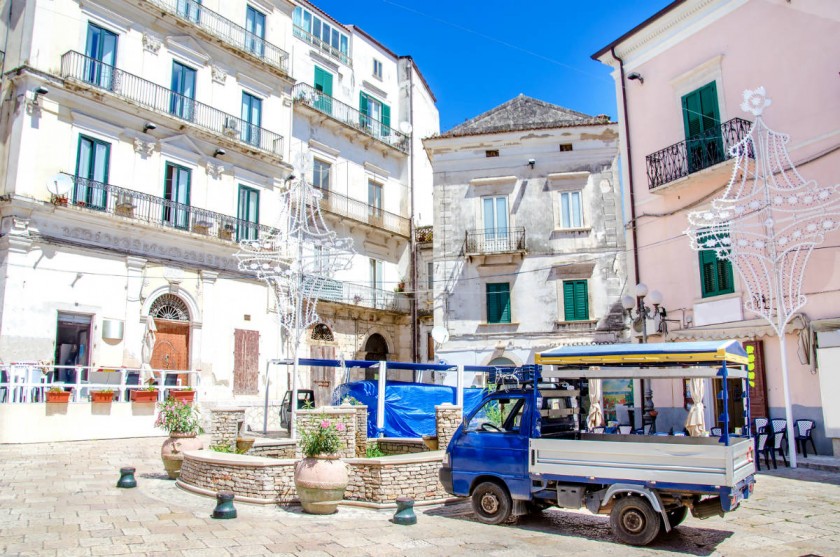 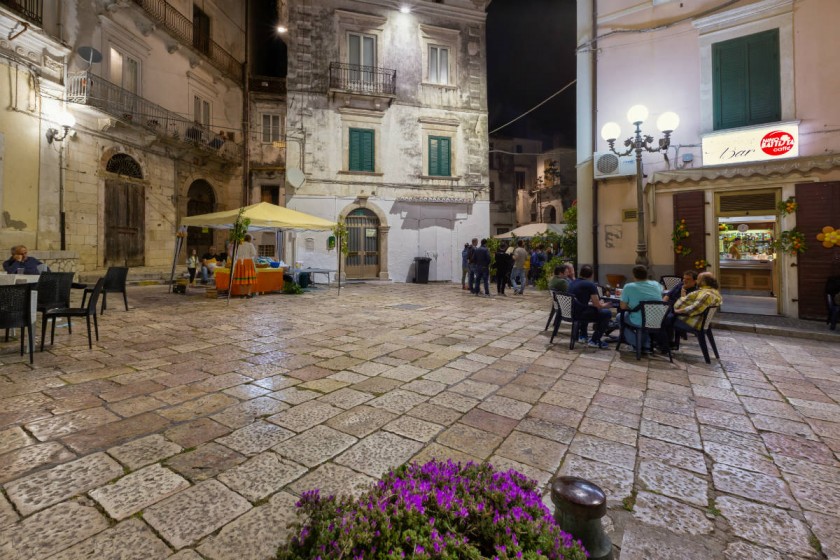 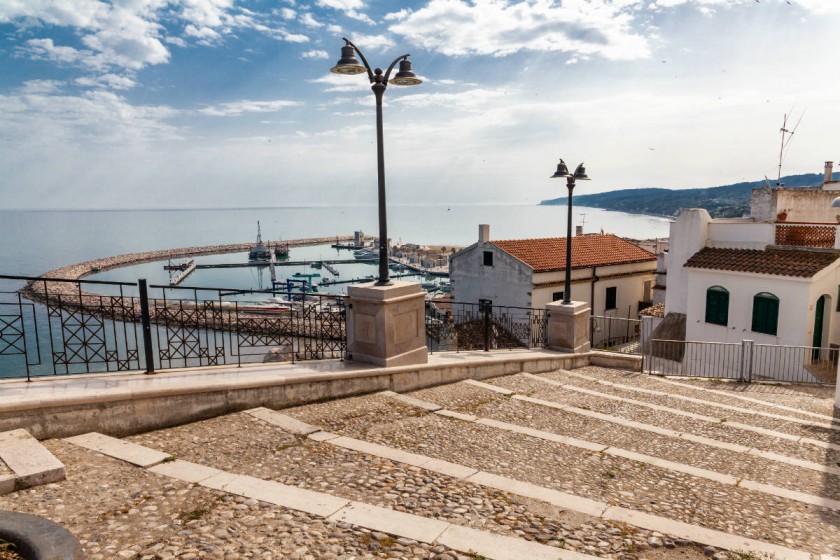 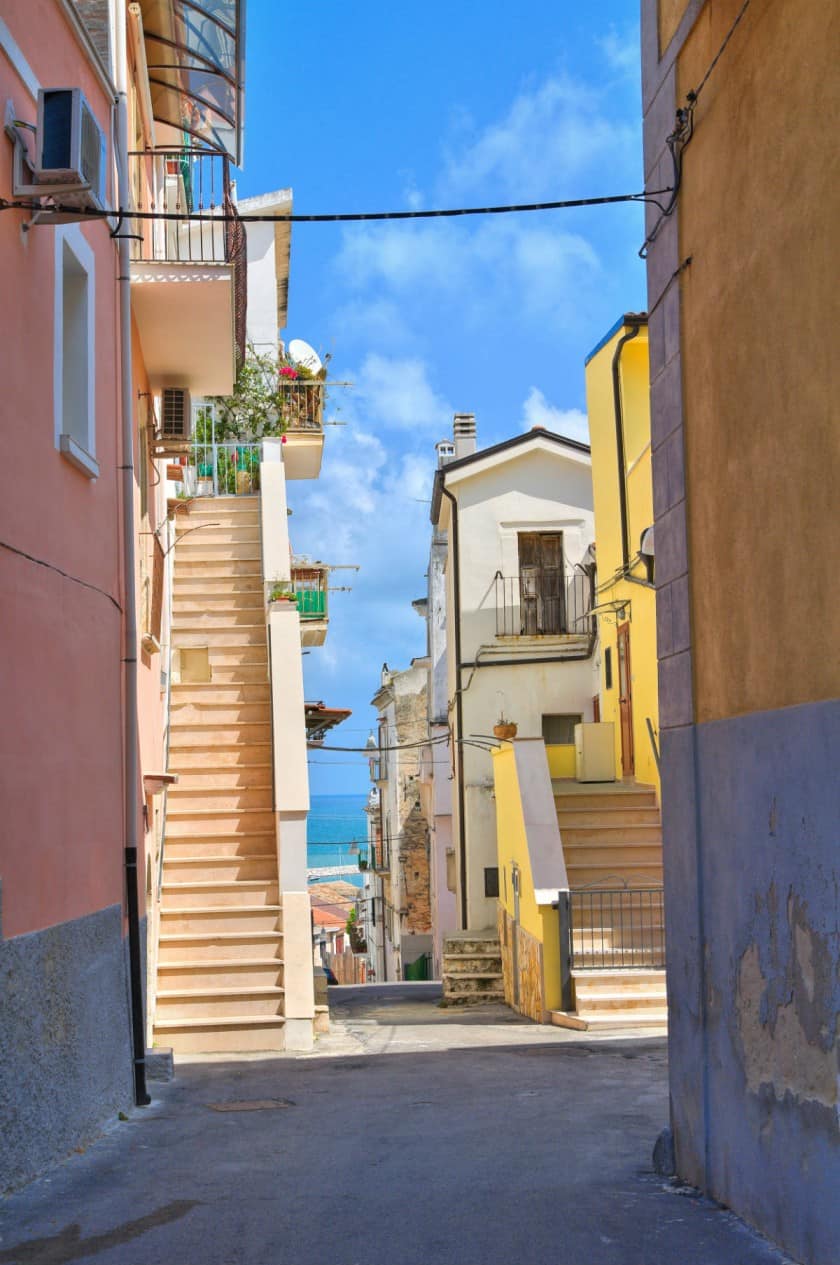 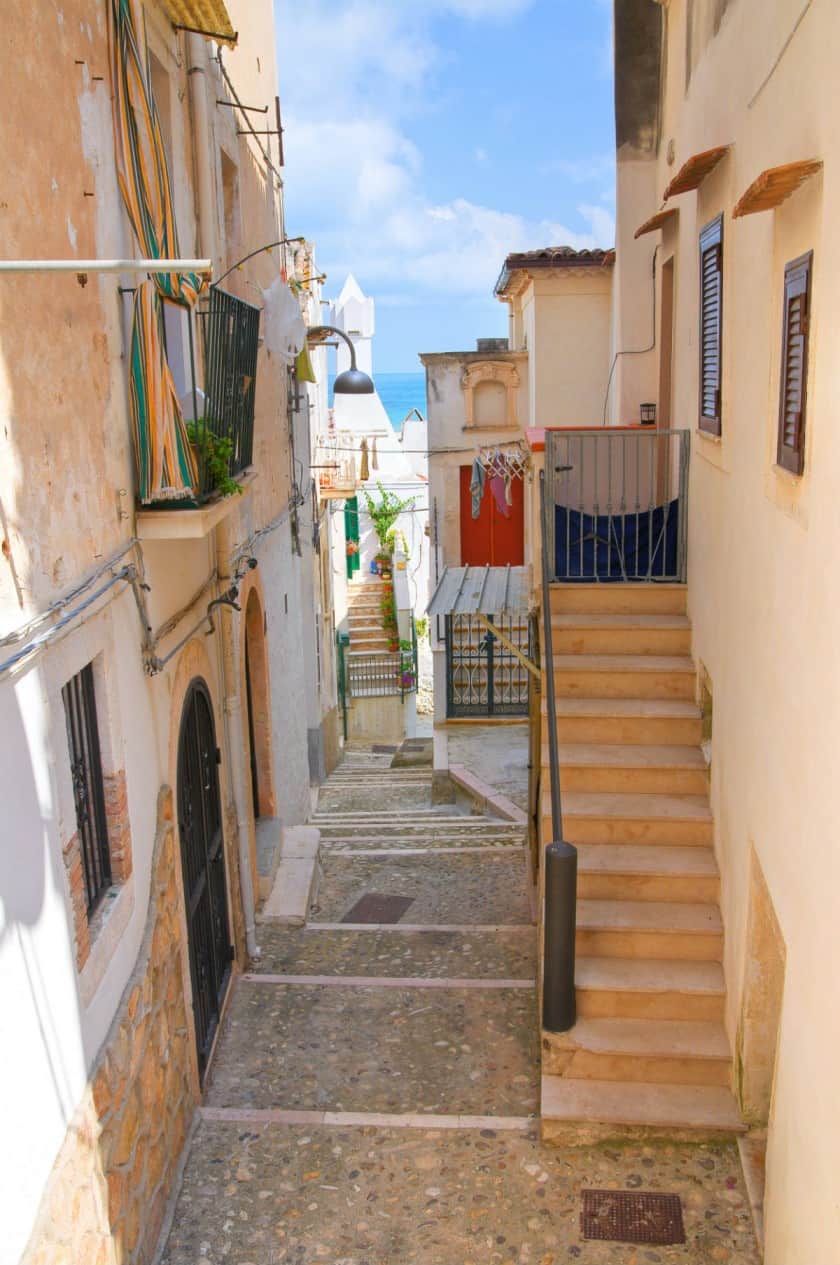 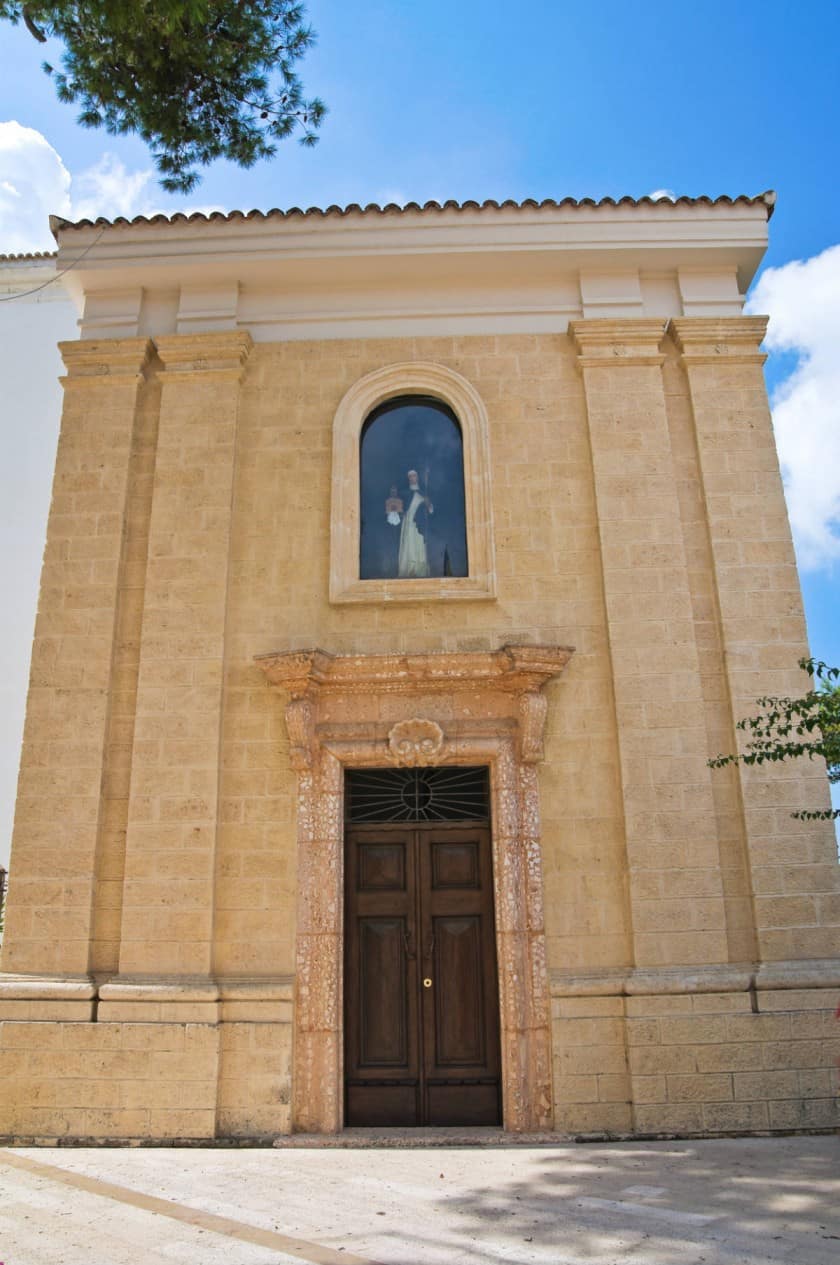 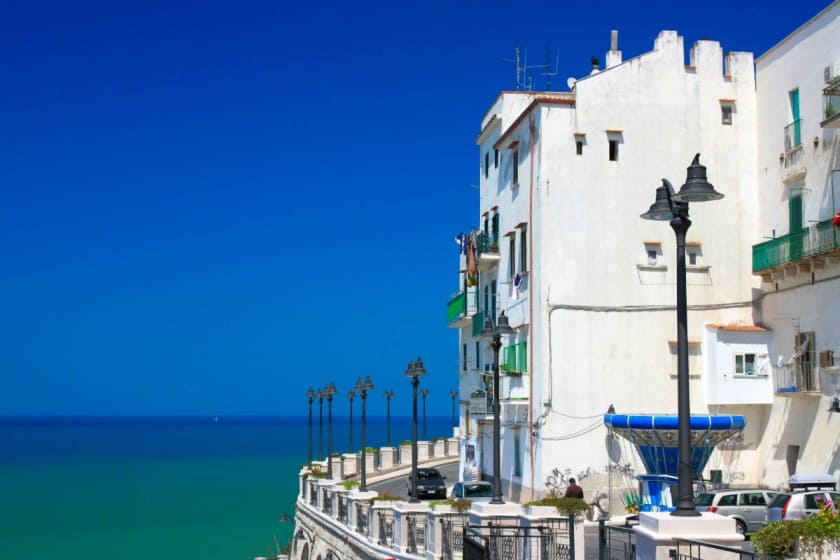 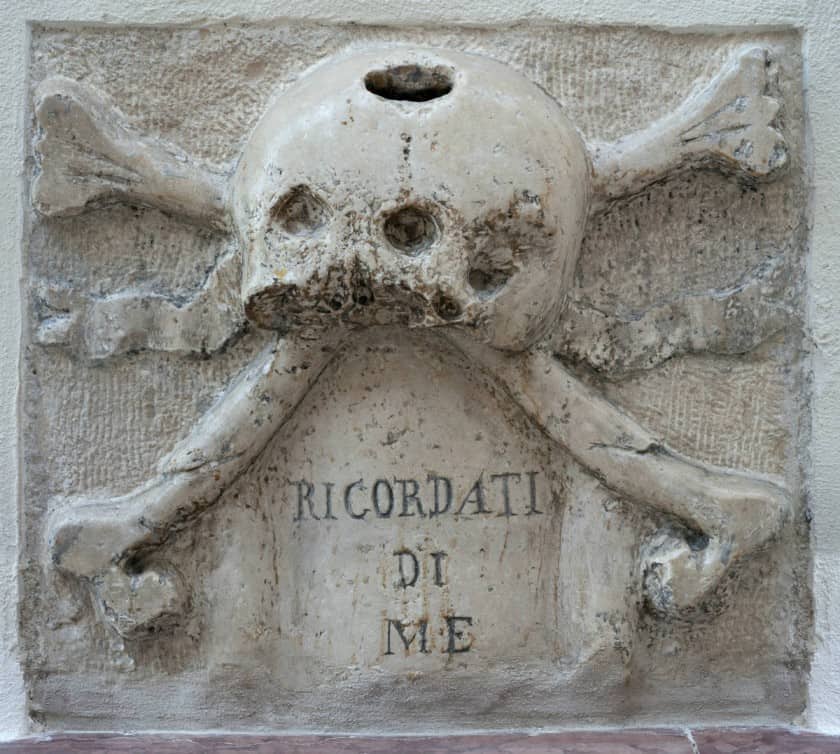 A look at Rodi Garganico

Since the Middle Ages, Rodi Garganico is known for the production of citrus fruit of the Gargano. Among these, the Gargano oranges and lemons Femminello, recognized today as IGP products.

The village is perched on a rocky promontory between two long sandy beaches are just a few kilometers to the east of Lake Varano. It is surrounded by a lush vegetation, mainly composed of citrus plantations, olive groves and pine forests, as well as by carob trees and figs. The historical center, like the walls of which is Cinto, is of medieval origin and is characterized by narrow alleyways, in good part steep and with intricate paths that are insinuated in an urban fabric consisting of houses of uniform architectural aspect, realized in such a way that each one is possible to see the sea.

Many are the evidence of the presence of prehistoric settlements (paleolithic and neolithic) in the area. But the foundation of the inhabited nucleus in the present site is later. The origin of Rodi Garganico was often linked to the movement expansionary of Rodii (for other of Argivi), people of Greek etnìa that in the VIII century b.c. it colonizzò the coasts attracted by the climate and pine forests. It is the same people who founded, according to the interpretation of Strabone, the city of Elpie (or Salapia). This interpretation, for the lack of a archaeological documentation relevant, it is still rather uncertain.

With the fall of Rome were ollowed difficult times: Rodi Garganico was destroyed by the Goths in 485 d.C., rebuilt in 553 after the Greek War-gothic and attacked by the Saracens in 950. As Hornbeam, was occupied in 1461 by the Aragonese. In 1446, in fact, was already be feud of Alfonso V of Aragon. Rhodes knew a new period of splendour from the XVI century thanks to the production of citrus plantations, whose die involved almost entirely the citizenship. The "protection" of saints was considered as a fundamental element for a fruitful agriculture: since the seventeenth century the rodiani were in the first row on the occasion of the feast of San Valentino (patron of citrus plantations) during the long procession of February toward the colle del Carmine (Vico del Gargano) to bless plants and fruits of lemons and oranges.

The choice of the Holy came after discussions and pilgrimages in search of a patron whose holidays are collocasse in the winter season period most critical for crops of oranges. The story goes that a delegation of inhabitants coming from Rhodes and from Vico came on pilgrimage in the catacomb which guarded the busts of saints martyrs, where the head of the delegation, detonated the projecting arm of San Valentino: was a providential sign and decisive for the choice. On 10 February 1618 the Archbishop of Manfredonia approved the choice and four days after the bones of the Saint came to Rome in the Mother Church of Vico, giving origin to the traditional procession of 14 February, today event below and shared by rodiani and vichesi.

An event ominous instead was represented by the disastrous earthquake of Gargano of 1646 which caused the destruction of many of the buildings and also the death of four people. In 1815 Rodi Garganico hosted at the "turret of the King", Gioacchino Murat, who stayed here between the second fall of Napoleon and the proclaims of Rimini. In the last century, during the fascist period, experienced a period of moderate economic development thanks to the construction of the railroad garganica. Immediately after the second world war, however, the trade of citrus fruit, the main economic activity of the city, halted due to the international political situation that restricted trade flows: in fact it was not more possible to trade with the dirimpettaie Dalmatian coast, the main goal of Rodi exportations.

Today Rodi Garganico, despite having kept the production of citrus plantations - in a framework of development oriented toward the exploitation of the typicality of various agricultural products, gastronomic and farm stays-, has mainly developed its own tourist-receptive vocation. Already appreciated seaside destination in the sixties, has undergone important processes for the restoration of the architectural heritage and urban renewal put in place by the municipal administrations that have succeeded one another in the last decade; the recent construction of a marina, finally, has conferred an interesting role in the tourist circuit of the Mediterranean.

Small faraglioni enrich the stretch of coast on which the village. The largest and most well known is the one called "Dog" (or "del Leone") because of its particular shape that recalls, precisely, a dog or a lion that watches over the town from the dangers of the sea. On the top of the rocky cliff to the east of the faraglioni is placed an ancient trabucco, an imposing wooden structure was used traditionally for fishing, typical of the Gargano and as such protected by National Park.

The Vuccolo is the ancient area of the port of Rhodes. The etymology of the name comes from the verb longobardo "vucculare" which means "shout", "Call". It owes its name to the typical (up to some time ago) custom of popolane call (vucculare) terraces husbands intent to work networks at "Mer i varc" ("sea of boats"), the name with which still today is called the port area.

The Chépe Abbasce district (head down) is characterized by narrow alleyways with intricate paths, steep staircases, arches, piazzette hidden and panoramic terraces. The narrow alleys and the disposition of the houses replied to the dual requirement of shelter from strong winds winter, but also to be able to see the sea. The district, in fact, was inhabited mostly by fishermen. Located in the historical center the Church of the Holy Crucifix and the now disappeared church of San Michele Arcangelo.

The rodiana cuisine is characterized by many typical dishes generally based on fish or vegetables. Among the typical starters there are a salad of anchovies or agostinelle and anchovy (raw) with sauce of oil and lemon (lìce or iustenédde, ògghie and chemùne), an orange salad seasoned with oil (nzaléte de Iàlle Port), or a salad of mussels or razor clams fresh seasoned with lemon and parsley (i còcchele nére' or cannelìcchie pe chemùne u).

Among the first courses, instead, you recall the thimbles with the telline seasoned with fried garlic and oil (tubettìne pe the cuchìgghie), the troccoli with squid stuffed with bread and cheese (sécce chiéne ntrùcchele and), and bucatini with the shrimps (mbricciatìlle cechéle and). Among the main dishes of fish, typical are the bianchetti marinated, seasoned with oil, vinegar and parsley (grugnalétte marenéte); the anchovies "mollicate" to rodiana, i.e. seasoned with oil, tomatoes, parsley, garlic and crumb of bread and mussels or anchovies au gratin (còccele nére or lìce arracanéte).

Among meat dishes, we remember the Viennese roulades rodiana to (i ciambòtte), and a goulash kid, potatoes and mushrooms (said ròte u).

Among the sweets are the taralli seasoned with vincotto (mustazzùle), the strùffele, pralines delicious smeared with caramelised sugar, or the pants or panzerotti sweets (i caveciuncìdde).

The spirits are the pride of the kitchen rodiana. First there is the limoncello, a liqueur made with the typical lemon femminello which made famous the town garganica, followed by the arancino, liqueur of oranges, from Laurino liqueur of laurel, and from mostocotto, a liqueur cherry.

Via Chiesa Madre, 4, Vico del Gargano (Foggia)
6.66 Kilometers from Rodi Garganico
Church of Purgatory
The church of the Purgatory rises in Piazza del Popolo, the historical center of Peschici.

Piazza Del Popolo - 71010, Peschici (Foggia)
10.78 Kilometers from Rodi Garganico
Castle of Peschici
The castle of Peschici, built by the Normans, was built to protect the Gargano lands from raids.

Via Castello - 71010 , Peschici (Foggia)
10.79 Kilometers from Rodi Garganico
Church of Sant'Elia
The church of Sant’Elia is the mother church of Peschici

Piazza Episcopio, 5, Troia (Foggia)
79.35 Kilometers from Rodi Garganico
Church of Purgatory
The church of the Purgatory rises in Piazza del Popolo, the historical center of Peschici.

Piazza Del Popolo - 71010, Peschici (Foggia)
10.78 Kilometers from Rodi Garganico
Prior's Tower
The Palace and the Tower of the Grand Prior of Alberona, in Puglia, dates back to the XII century.

Piazza Civetta, 11, Alberona (Foggia)
84.07 Kilometers from Rodi Garganico
Saint Michael Archangel Cave
This cave is one of the most important places of pilgrimage in the region of Gargano, Apulia.

Find where to sleep in Rodi Garganico

Patronal Feast of the Holy Virgin of Libera and San Cristoforo

Our news about Rodi Garganico

Villages between Puglia and Irpinia
Foggiano and Irpinia. You said everything, you said a lot. Think of the province of Foggia. Very extensive. From the countries immediately after the Bari and the Bat, here already Cerignola, historical and big agricultural reality, the city of the trade unionist Di Vittorio. From here we go inside, going towards Candela and the Subappennino Dauno, 49 villages set in the not very high mountains of this particular southern and Apulian mountain ...
Continue