Share
Fortified village, located in the hills of the Val d'Elsa between Siena and Florence, Barberino offers an enchanting panorama of the Chianti hills. Walking through the village it seems to relive the history of the past. Accessing the village through the Porta Senese, you will find the Palazzo del Cardinale. Continuing along the main street you will find Palazzo Pretorio, now the seat of the Propositura di San Bartolomeo. 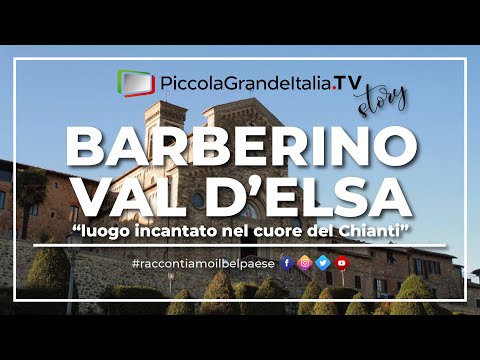 The story of Barberino Val d'Elsa in Tuscany is linked to the destruction of Semifonte by the Florentines in 1202. Its development, on the other hand, is that of being on the Roman Regina Road connecting Florence with Rome. The village is characterized by an elongated shape, within which the main road reaches the center by connecting the two major access points to the city. Coming from the Porta Senese to the south, well preserved, we are in via Francesco da Barberino, where there are several interesting buildings with beautiful wooden gates and limpid stone walls which, according to legends, are exactly those of Semifonte's rubble. To the left of the entrance is the Palazzo del Cardinale, where on the front door you can see the coat of arms of the bees, that of the Barberini, the powerful family of Pope Urbano VIII. Continuing on the main street, we meet on the right the Palazzo Pretorio, currently prepositions of San Bartolomeo, with a Renaissance facade decorated with the 35 coat of arms belonging to the most important families of Florence, most of them carved in serene stone with some example in engraved ceramic robbian bill . The characteristic urban layout makes us admire the back of the Church of St. Bartholomew. Barberino's position on the crossroads leading to the Via Francigena has always made this village a welcoming and restful place for travelers and its inhabitants took care of pilgrims. In fact near Porta Fiorentina is the Spedale dei Pellegrini, built in 1365 by Taddeo of Cecco, son of the notary poet Francesco da Barberino. Recently restored the ancient building is characterized by a beautiful 14th century archiacut portal that overlooks the square of the same name. Continuing to walk, you reach the Church of St. Bartholomew.

In its territory we can meet the medieval archeological site of Semifonte, which derived its name from the corruption of the Latin summos fons, spring on the top, since it lay right on the top of a hill. Semifonte knew in a short time the birth, the power and the definitive oblivion. In 1181, Count Alberto degli Alberti, in order to counteract the Florentine expansion, undertook the construction of a fortress that dominated Via Volterrana and Via Francigena: this castle was transformed into a powerful village, defended by three kilometers of bastions, with four doors, a doormat, seven churches and three hundred dwellings. From the beginning Florence, alarmed by the strategic location of the new fortress, attempted to counteract its growth, but the urban and economic development of the new settlement was rapid so that at that time at Semifonte were singing "Va Firenze, made in there Semifonte is a city. " Even Dante, in Heaven, cites it as a center of primary importance. "If the people in the most bizarre world had not been to Cesare Noverca, but as a mother to her benign son, such a thing is Florentine and it changes and merchandise, which would have turned to Simifonti, where he was looking for" . (Dante Alighieri, Paradiso XVI, 58-63)

Florence could not allow the Semifontes, brave fighters and skilled merchants, to expand at his own expense, and never interrupted hostilities. At first Semifonte could enjoy the help of the small neighboring cities, such as Colle and San Gimignano, as opposed to Florentine hegemony, but in the year 1200, Count Alberto IV, in order to save the rest of his feudal domains, agreed with the Commune of Florence selling it for four hundred pounds its half of the rights to the castle. Diplomatic isolation and famine, the use of terrible war machines and Greek fire eventually led to the rendering of the fortress in 1202. The inhabitants saved their lives, but the city was rocked on stone stone. The demolition lasted for years and the stone material was recovered and used to erect a powerful wall in Barberino Val d'Elsa. Destruction survived only today's inhabited area of ​​Petrognano, as it was outside the city's wall circuit: it is the so-called "Borgo", which in fact was also fortified, and which during the siege was conquered first by the Florentine militias. Today you can see the structures of three houses - towers and some bastions.

Semifonte did not even remember. For four centuries the law forbidding to build on the lands where Semifonte had arisen was in force, until in 1597, on the project of Saints of Tito and by the will of John the Baptist by Neri Capponi, who obtained from Grand Duke Ferdinand I a special derogation erected, where once was the central square of the country, an octagonal plan dedicated to San Michele, which reproduced in perfect scale one to eight that of Santa Maria del Fiore in Florence, raised by Brunelleschi.

Of the city are hidden by the vegetation some ruins such as furnaces and some chapels containing springs. The so-called Fonte del Latte is so beautiful.

It is on the ruins of the powerful Semifonte where was born a place of rest and relief for the Romei pilgrims, that in the XIV century, after the hijacking of the via Francigena to Florence, found in Barberino a known hospital, beyond that inns and churches in which they could relieve themselves from their labors and rest body and spirit. In the same way, in the outskirts of the village, the pilgrims themselves, taking the road to the Vald'Elsa and Siena, could pause and find comfort in Pieve di Sant'Appiano, which also visitors of today can reach in few steps along the old road. The parish church is one of the most ancient churches of the Florentine countryside, fascinating especially for the mating of the oldest parts of stone, dating back to the XI century. Its Antiquarium gathers Etruscan finds found in the area, and paintings of sacred subjects. Walking among the nature of the surroundings, it almost seems as if you could hear narrating the bitter history of ancient Semifonte, that, daring to challenge the supremacy of the city and so it was condemned by the Florentines to total destruction and perpetual abandonment. The current project to make it, together with other surrounding places, a landscaped park, brings new light and splendor on that ancient condemnation and on the ruins of the old fascinating city that still lurk among the vegetation.

Strada di Badia, 28, Tavarnelle Val di Pesa (Firenze)
7.27 Kilometers from Barberino Val d´Elsa
Leonardian Museum
The Leonardian Museum of the village of Vinci is one of the collected more spacious and original ...

Via Michele di Lando, 12 - 50033, Firenzuola (Firenze)
66.47 Kilometers from Barberino Val d´Elsa
Coltelleria Saladini
The ancient medieval town of Scarperia was founded by the Republic of Florence on 8 September 130...

Via Solferino, 19 - 50038, Scarperia (Firenze)
52.72 Kilometers from Barberino Val d´Elsa
Bacciotti Agricultural Company
On the hills of Mugello, in the municipality of Scarperia in Florence, is the Società Agraria Bac...

Montelupo Fiorentino: gems of Tuscany
Magnificent and munificent, Tuscany, a region studded with precious jewels: the villages of memory, a unicum of history, traditions, legends, customs and folklore. Starting from its capital, Florence, in whose territory, among the numerous, Vinci, Barberino Val d’Elsa, Certaldo, Montefioralle and Scarperia stand out. And then Montelupo Fiorentino, whose manufacturing tradition is also found in the gastronomy that goes from the past to to...
Continue