Share
Located in one of the most interesting cultural and naturalistic areas of all Sicily, in the surrounding area are the important Sicilian-Greek-Hellenistic site of Morgantina, the Norman-era Pietratagliata Castle, and, a few kilometers away, the Roman Villa of Piazza Armerina, Unesco site. 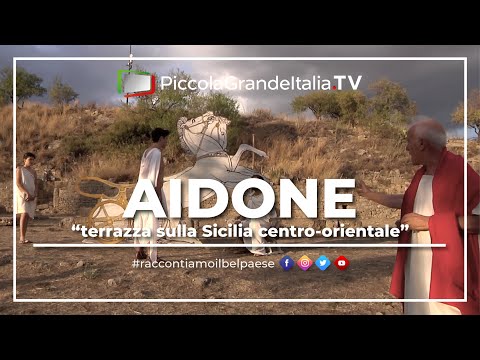 The village of Aidone (Aidungh Dadungh or in the dialect gallo-local italico; Aiduni Aidò or in the Sicilian) is located in Sicily, in one of the districts of cultural and naturalistic most interesting of the entire region. In its territory there are the important site-siculo greek-Hellenistic of Morgantina, the Castle of Pietratagliata Norman, and, a few kilometers, the Roman Villa of Piazza Armerina, Unesco site. The territory is rich in natural woods and artificial occupying the north west, and significant sites of naturalistic importance: with Piazza Armerina and Enna shares the Park of the chase and the border with the province of Catania is the lake of Ogliastro, a wetland of naturalistic interest.

In antiquity its etymology was traced immaginativamente Aidoneus to an epithet of God Ade-Plutone, that, after kidnapped Persephone at Lake Pergusa, would have been landed on the hill of Aidone. The legend gave origin to the wide diffusion of the cult of Demeter and Persephone throughout central Sicily. Other significant hypothesis is the origin of the term Arabic Ayn dun, in the meaning of "Higher Source", etymology that would be justified by the considerable presence of sources of water throughout the territory.

To Aidone, as in Piazza Armerina, Nicosia, San Fratello, Sperlinga, you speak a dialect that has always played a stranger to the ear of the Sicilians: a peculiar spoken of Lombard origin, which has its roots in the Norman conquest of Sicily. Over time these dialects were defined lombardo-Sicilians, gallo-novels, gallo-Sicilians and finally Gallo-italic of Sicily to distinguish them from the northern Gallo-Italic. In Aidone, in a particular way, already at the beginning of the last century the galloitalico was seen as an element of inferiority because in fact made it difficult relations with neighboring countries; since then the vernacular lived with a form sicilianizzata, that slowly has overwhelmed the ancient form; the aidonesi were bilingual for need and then trilingual with the affirmation of Italian. Today remained very few speakers and was born of the need to know it.

The village is full of significant points of interest such as the Castellaccio, which remained only ruins but from which it still has a beautiful panorama; the tower Adelasia and the Church of Santa Maria La Cava; the mother Church of San Lorenzo and the Archaeological Museum. The latter houses the archaeological finds in the nearby and very important Morgantina, ancient Greek city, one of the most interesting archaeological sites of the sicilian hinterland.

Aidone was founded at the end of the XI century by the Normans during the conquest of Sicily and the expulsion of the Arabs. The Brothers Altavilla, which guided the conquest, led to ripopolarlo i Lombardi, who had contributed to the company and that in good part came from Monferrato. This sort of colonisation is traced back to the origin of the dialect aidonese. In the Norman period dates back to the foundation of the castle dominating the city, the Church Mother (dedicated following San Lorenzo martyr), the church of San Leone dedicated to Pope Leo II and, outside the walls, the church of Sant'Antonio Abate.

In 1229 the Knights Templars was allowed to build up the church of San Giovanni and for its maintenance were granted pensions of some plots. After the death of Federico II, in 1255, Aidone was declared a free commune and managed to withstand the assault of Pietro Ruffo and count of Catanzaro, acting in the name of King Manfred; in 1257, however, was taken and plundered by the army svevo, guided by Federico launches. Aidone took part in the revolt of the Sicilian Vespers, expelling the french garrison. In the framework of the struggle between the Angevins and Aragonese emerged the figure of Fra' Perrone, the friar of the Dominican Order that fought the Aragonesi between 1284 and 1287; when he was captured by the Admiral Ruggiero di Lauria is killed in prison. In 1320 the feud passed to Rubeo II Red, and then to his son Henry III Red, chancellor of the kingdom of Aragon. The Count Enrico Rosso Senior was one of the most powerful feudal lords of the Kingdom of Sicily and became the needle of the balance between the factions latine spearheaded by the Chiaramonte and the catalan of Alagona. In 1373 it was forced to cede the feud of Aidone (including the castle of Pietratagliata, the fief of Fessima and I casali Baccarato, Asmundo and Pietralixia) Gioeni Perrone, in exchange of the fief of Castroleone (Castiglione di Sicilia). The castle of Aidone hosted in 1396 the Queen Mary and her husband Martin the Young and in May of the year 1411, the Queen Bianca from Navarra, widow of King Martino il Giovane, who stayed there long protected by Gioienis. In 1427 Count Bartolomeo Gioeni III signed the act "privileges and practices for the Aidonesi", giving the local power to "baiulo" Giovanni Caltagirone, assisted by a "captain of justice". In 1531 Giantommaso Gioeni introduced the veneration for San Lorenzo martyr making it the patron saint of the city instead of San Leone.

In 1693 the earthquake that struck the whole eastern Sicily provoked in Aidone fifty deaths, the destruction of the country and the collapse of many churches and buildings, among which the Mother Church of San Lorenzo. Some churches were restored or reconstructed, therefore almost all buildings of Aidone are, except in some parts, eighteenth century or with considerable elements dating back to this time (the valances of San Domenico, the facade of Santa Maria La Cava, portals of San Leone, of the Annunziata, etc), their style is influenced by the baroque prevailing in Sicily but with sections sober and classical style. Other churches and convents were demolished, such as the convent and the church of Santa Caterina, the Church and the convent of San Michele Arcangelo, the Church and the convent of Saint Thomas the Apostle, the church of San Giacomo and many other churches which now is lost every track. With the marriage of the last descendent of the Gioeni with Marcantonio V Column, the feud passed to column, Roman princes. From 1805, following the discovery of the first field of sulfur, began to Aidone a period of prosperity fed from the extractive industry. The population had a notable increase, with the immigration of miners from neighboring countries, which lasted even in the successive century until the second world war (the phase of closure of the Mine Baccarato began in 1960).

Aidone was the seat of a cell carbonara guided by Domenico Scovazzo and on 26 January 1848 rebelled against the king Ferdinand II of the Two Sicilies. During the expedition of the Thousand Aidone participated to the fighting: in contrada Dragofosso a group of 120 aidonesi, guided by Vincenzo Cordova and Gioacchino Mazzola, managed to divert a Bourbon contingent led by General Gaetano Afan de Rivera, favoring the conquest of Palermo by Garibaldi. The social and cultural life of Aidone in the Nineteenth century was very lively and rich in social and cultural initiatives. In 1865 was founded a municipal library to which was added, since 1884, also a popular library circulating educational. In 1889 the Brothers Luciano and Giuseppe Palermo founded the "Monte di Pieta' and the related bank; a few years later was born the "mutual aid society Principe di Napoli" (then "artisan company") founded by Vincenzo Cordova and Domenico Minolfi and finally, in 1895 was constituted the "Monte Frumentario" with 157 members. Since 1843 there was a female orphanage, in 1884 was created the kindergarten "Vittorio Emanuele" for pupils poor and an elementary school with 14 classes in the former monastery of the Dominicans. In 1902 the parish priest he opened an institute of women for the teaching of sewing and embroidery. In 1903 was born the "League of workers of the earth", with 300 members and the establishment of a social fund, and in 1905 the "League of improvement" in favor of the workers of the sulfating.

Feast of Saint Philip the Apostle