Share
The village of Barolo, in the historic region of the Langhe, fascinates tourists for the majestic castle that dominates the entire town, which houses the Enoteca Regionale del Barolo, a place where the finest production of local wines is selected, of which the king is certainly the namesake Barolo DOCG.

A loot at Barolo 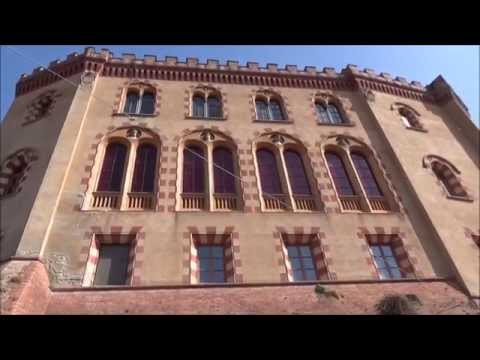 The village of Barolo (Bareu or Bareul in Piedmontese) is located in the historic region of the Langhe, in Piedmont. Set on a small plateau, in the shape of a spur, is protected by the surrounding mountains, disposed to amphitheater. Strikes of the conformation of the different positioning of its urban core with respect to the adjacent countries, placed around the top of a hill or along a ridge.

There are no precise information on the origin of the village. Although the area was inhabited in prehistoric times by tribes Celto-ligures, the first settlement of which there is proof on the territory was of Barbarian origin and dating back to the Early Middle Ages. During the longobard dominion depended from Gastaldo di Diano, step is then under the County of Alba and subsequently under the brand of Turin. The original nucleus of the castle was erected in that period by Berengario I, as a defense against the Saracen raids. In 1200 the country is mentioned in the Rigestum Comunis Albe with the name of Villa Barogly. In 1250 the Falletti family, acquired all the possessions of Barolo from nearby Alba. The Falletti were a powerful family of bankers, exponents of the new bourgeoisie, which marked the destiny of Barolo and the surrounding areas. Around 1300 arrived to check up on a fifty Piedmontese feuds. In 1486 Barolo became part of the State Monferrino, then passing in 1631 Ai Savoia with the Treaty of Cherasco. Barolo then became a marquisate in 1730, the first Marquis was Gerolamo IV. After Gerolamo IV there were only two other Marchesi: Ottavio Alessandro Falletti and Carlo Tancredi, the death of the latter ruled his wife the Marchesa Juliette Colbert, which was distinguished by its brilliance and its actions in favor of the weakest. At his death in 1864 between its willingness there was the creation of the Opera Pia Barolo to which left the whole heritage of the family.

Barolo has lived since then its ups and downs, as well as the viticulture. Also here, as elsewhere, the peasant civilisation has paid his bill, fact of abandonment of their own land and emigration because of the difficult conditions of life which the phylloxera gave a significant contribution. The early years of the second world war of the twentieth century, those of Hell wonderfully described by the great writer Beppe Fenoglio were not very different in terms of hardness. In this period it was followed by another characterised by the exodus toward the city, which offered a job safer and less distress, and which lasted until the years '60: the consequence of this was another step of abandonment of the countryside, that here was however lower than in the Alta Langa and to other areas of Piedmont. The most recent years are instead making record a reverse phenomenon: young people consciously chose the profession of the winemaker, accomplice the presence of the nearby Oenological School of Alba, while older people return to do so. All this is possible thanks to the renewed interest in the wine and its interesting profitability.

Today Barolo is a country of wine in the sense of the narrow end: its presence is breathed in fact on every street corner. And the Barolo wine, which is not as all other makes of Barolo country a bit of a sort of "sacred place", which the followers of the pagan cult of wine should occasionally to pay homage with a "pilgrimage". This hope has already been translated by some years in reality, making grow slowly a tourist activity capable of giving a significant added value to the local economy. This does not seem to have altered neither the peaceful character of the gentiles here nor their pace of life. Do not be surprised therefore if Barolo, unlike other places become suddenly famous for wine, is still a country of ownership of its inhabitants: This character can be seen by visiting the baker or in pharmacy, where it is not unusual to wait for a few minutes your turn while the person in front of you lies ragguagliando the operator on the state of health of some of his beloved. In these cases don't get nervous or by the impatience but let yourself to be lulled by the rhythm, sweet as the many hills that surround this magical village.

Certainly deserves a visit the Castello dei Marchesi Falletti, inside which is housed the WiMu, the Ethnographic Museum and enology of Barolo.

Village of Barolo
Municipality of Barolo

Via Camillo Benso Conte di Cavour, 27, Castiglione Falletto (Cuneo)
3.33 Kilometers from Barolo
Serralunga Castle
The Castle of Serralunga d'Alba, in Piedmont, dominates the village that is located on the ridge ...

Via Castello, 5 - 12060, Grinzane Cavour (Cuneo)
6.34 Kilometers from Barolo
Barbaresco Tower
The Tower of Barbaresco represents the symbol of the village of the same name, in the Langhe.

Via Torino, 51-63, Barbaresco (Cuneo)
17.05 Kilometers from Barolo
Castile
Castile was the privileged and fortified residence of the Marquis of Saluzzo, which became a pris...

Via Santa Maria del Piano 77 , Neive (Cuneo)
18.06 Kilometers from Barolo
Langhe Country House
In the UNESCO Heritage Sites, you will find the right place for a relaxing and warming holiday.

Via Pallareto, 15, Neive (Cuneo)
20.97 Kilometers from Barolo
A nostro Mizoun
An authentic agriturismo with an overlook on the mountain of Monviso where you can taste local di...

Località Durandin 39, Ostana (Cuneo)
59.64 Kilometers from Barolo
Langhe Country House
In the UNESCO Heritage Sites, you will find the right place for a relaxing and warming holiday.

Via Pallareto, 15, Neive (Cuneo)
20.97 Kilometers from Barolo
Rifugio Galaberna
At the Galaberna refuge we try to create the right atmosphere for you to relax in thanks to a fri...

Langhe: journey to the villages of Alba, Barolo, Barbaresco and Neive
It is time for truffles in the lands of Barolo and Barbaresco. In the heart of the Langa hills, in the shadow of castles and vineyards, Alba has once again become, as every year, the world capital of taste. October and November are the months of the International Truffle Fair of Alba, showcase of flavors and culture of a unique and extraordinary land. Alba is a triumph of events and parties, exhibitions and meetings that attract tourists fr...
Continue
Recipe: Panna cotta
Dessert of Piedmontese origin, in particular from the Langhe area, whose birth would date back to the early 1900s by the starred chef Ettore Songia. It is a delicate pudding very simple to make, using: cream, milk, sugar and flavored with vanilla bean seeds and adding the gelatine sheets to firm the mixture once placed in the refrigerator. It is usually served with berry sauce, caramel or chocolate.Today it is a dessert that has become famous all over the world, especially in Greece, France and England, whose similar recipes use egg...
Continue
Recipe: the braised beef with Barolo wine
A typical dish of Piedmontese cuisine, the "Brasato al Barolo" is a dish that conveys delicious emotions through the harmony of flavors. The term brazed derives from the dialect "brasa", meaning embers and refers to the cooking method originally used. It is a slow and long cooking, in fact the meat is placed in the center of the embers and cooked very slowly in the wine, for hours. This cooking then allows the meat's collagen to soften and become incredibly soft. The ideal piece of meat to prepare a good braised meat is obtained from the ...
Continue
Recipe: The Cisrà. The tripe and chickpeas soup typical of the Langhe
The Cisrà is a typical dish of the Langhe area, in Piedmont, based on chickpeas and tripe. This soup was originally prepared with dark chickpeas of Middle Eastern origin. Today we prefer italian chickpeas, which are much tastier. This poor dish has very ancient origins and it is said that during the feasts dedicated to the saints, this dish was distributed, still warm and steaming, to the faithful. Ingredients 400g Tripe 200g Dried chickpe...
Continue
Barolo raises the glasses for a festival to drink!
Say Barolo and think of red wine. The ancient Piedmontese village, symbol of Italian wine in the world, is preparing to host a prestigious event, Barolo BING Best Italian Native Grapes and Wines, which will be held on 4 and 5 May in collaboration with the association Piedmont Good Wines and the Cia Cuneo. A great event conceived by Ian D'Agata for Festival Collisioni dedicated to professionals and wine lovers, which in its first edition will involve over one hundred...
Continue
The village of Barolo, between the Collisioni Festival and the splendid setting of the Langhe lands.
The Langhe return protagonists of the international limelight with the Collisioni Festival. Conceived in 2009 by a team of artists formed by Italian writers and journalists looking for a formula capable of speaking to new generations, and breaking down the divisions between different artistic languages, it is considered by most critics as the best festival in Italy for its innovative formula and for the ability to speak to a transversal public, with a rich offer of music, cinema, literature and food and wine. All in the ex...
Continue