Share
Termoli is characterized by the presence of a promontory on which stands the ancient seaside village, delimited by a wall that falls sheer above the sea. The city extends today on the coast and inland, but its driving force is the promontory on the Adriatic Sea, home to the characteristic Borgo Antico, topographically divided from the rest of the city by the retaining walls and the castle.

A look at Termoli

The Moon on Termoli Just after the sunset, you...
Michael De Sanctis - e-borghi Community 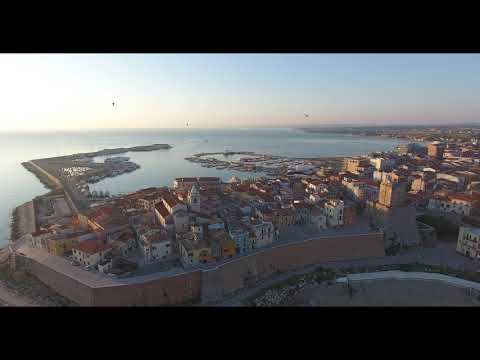 Termoli, a town in Molise, is rich in history and traditions, but it is also a modern and cherished tourist center characterized by wide sandy beaches.
The city, which has been awarded the "Blue Flag" since 2003, is an important tourist city, particularly appreciated for the quality of the sea water and the safety of the beaches, which are one of the most precious resources in the country.

Perched on a small rocky promontory, directly overlooking the sea and surrounded by walls, the village has origins that date back to the 5th century B.C.
The oldest attestations of life date back to prehistoric and Roman times and are documented by the findings of prehistoric necropolis in the district Porticone and Difesa Grande.

The first event dates back to the construction of the building on which, in the 12th or 13th century the Cathedral was built. In fact, not surprisingly, the charm of the village is characterized by the presence of the two oldest buildings in the area of the Molise: the Castello Svevo, designed by Frederick II of Swabia, situated on a promontory close to the sea ​​(used as a symbol of the same city) and La Cattedrale, located in the heart of the village.

The center, which seems to resemble a labyrinth, stands out for its narrow, winding alleys, including the famous Vico II Castello, considered one of the narrowest in Europe. Moreover, in the ancient area of ​​the town, there are the Church of Sant'Anna and the Torretta Belvedere.
The village is accessible from two entrances: one on the north side, at the feet of the Castle, and one on the port side, characterized by an arched door and the Torretta Belvedere, from which you can admire the view of the port and the beach to the south of Termoli.
Due to the strategic location of the city, on sunny days you can admire the Gulf of Vasto and the Majella mountains of Abruzzo to the north, towards the sea the Tremiti Islands and to the south the profile of the Gargano promontory.

Termolese cuisine is the result of a close relationship with the territory, genuine and tasty in its ingredients.
A cuisine typically linked to sea products, making extensive use of local olive oil, tomatoes, basil, celery, onion and garlic.
A cuisine that, despite the contamination of the neighboring regions, reveals its identity and a strong link with tradition.

There are several typical dishes of the area, but the typical dish par excellence is "u 'bredette alla termolese", an evening meal for fishermen returning home from their boats. It consists of a simple soup prepared with the leftover fish that was collected at the end of the day, because it was unsold or because of poor quality, or because it was too small.By now known only from the old Termolese is instead ‘u pesce fujjute '(the escaped fish), whose ironic name, in reality, derives from the poverty of those who prepared it, as this was not really present.This dish was in fact composed of only oil, water, tomato, onion and a piece of pepper.

Castello Svevo
This castle is the most representative structure in the coast of Molise. It was built around the ...
Via Montecastello, 86039, Termoli
A' Rejecelle
Located in the heart of the ancient village is one of the most unique and characteristic places o...
Via Salvatore Marinucci 2 - 86039, Termoli
Cathedral of Termoli
It is built on the highest point of the Borgo Vecchio of Termoli
Piazza Duomo - 86039, Termoli
Villa Zappone Archaelogical Park
At Villa Zappone Archaeological Park of Larino, in Molise, it is possible to admire the remains o...

Via Dante Alighieri - 86035, Larino (Campobasso)
22.46 Kilometers from Termoli
St. Pardo's Cathedral
the basilica of Santa Maria Assunta and San Pardo, is situated in the village of Larino, in Molise.

Viale F. Ciccaglione, 20-24, Riccia (Campobasso)
58.16 Kilometers from Termoli
St. Pardo's Cathedral
the basilica of Santa Maria Assunta and San Pardo, is situated in the village of Larino, in Molise.

Via Dante Alighieri - 86035, Larino (Campobasso)
22.46 Kilometers from Termoli
Rock Church of Sant'Antonio Abate
The Rock Church of Pietracupa in Molise, is located inside the Morgia overlooking the village fro...

Termoli is present in issue 4 of our digital magazine e-borghi travel.
Read it now!