Share
Riccia is the most important center of the Fortore valley, located on the side of a hill, in a landscape marked by wheat fields, olive groves and the green of the beech, ash and Turkey oak forest, in Mazzocca. To visit is the medieval old town and, through narrow streets and steep stone stairways, the area called Piano della Corte, with the imposing tower and the precious Church of Santa Maria delle Grazie.

A look at Riccia 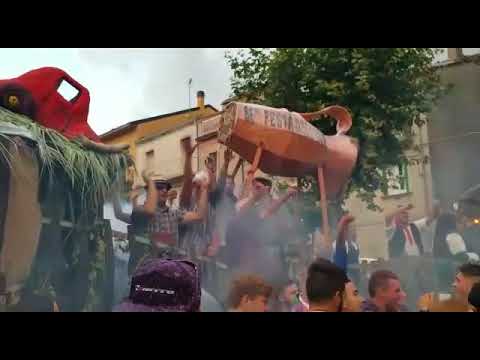 Riccia ('A Rìcce in local dialect), originally center sannita, was conquered in the social war from Silla, and had the name of Aritia, becoming a Roman outpost. The Roman Aricia becomes "Saricia" in the documents of the XII century and still "Ricia" and "Aritiae" during the century XIV, finally "Ritia" in the decrees of the Curia of the XVII century to reach the current name. With the Angevin conquest in the XII century, Riccia became important medieval outpost, with the construction of the castle above the old fortification sannita, as a point of control of trade.

The feud riccese was thus granted to the famous jurist Bartolomeo de Capua, the first duke of Termoli and belonging to the illustrious lineage of auditors of Altavilla. These, having sided with Luigi d'Anjou against Charles of Durazzo, was deprived of the feuds, just the Durres ascended to the throne, and assigned to Luigi de Capua (which became lord of Riccia in 1383). To Luigi de Capua happens Andrea De Capua in 1397. These, was faithful ally and friend of Ladislao di Durazzo. The Father Louis, general of real militias had died for the cause durazziana in the siege de Capua. The historical events of Andrea and the beautiful wife Costanza of Chiaromonte are now considered to be the most beautiful pages of medieval life between the walls of the ancient borgo riccese, especially thanks to the vicissitudes linked to these two figures whose mortal remains are buried in the Church of the Blessed Stefano.

With Bartolomeo III De Capua reach at the beginning of the '500 the apex of their fortune. Bartolomeo obtains investiture adjust all its assets in 1506 and is even nominated Viceroy in Capitanata and Molise. Engaged in law studies, is the author of a book on the habits of the Kingdom. Not only, but by provisions for the construction of numerous palaces, among which that of Naples, today Palazzo Marigliano, restructuring and the completion of the castle and the church of Santa Maria delle Grazie in Riccia, where he is buried. Among his brethren, there were Andrea, Duke of Termoli and lord of Gambatesa and Campobasso, John, captain of the militia aragonese died in battle to save the King Ferrante cedendogli your horse, Fabrizio, Archbishop of Otranto. Bartholomew there was the last feudal lord of de Capua, but also who enjoyed for more time of his feuds, 60 years. By avi inherited the title of Protonotary of the Kingdom and distinguished himself as colonel of the Regiment Land of work in the battle of Velletri (1744), which is fundamental for the beginning of the domination of the Bourbon on the Kingdom of Naples, where he was seriously wounded at a thigh. Bartolomeo in following this event, with a supplication to the king sought to recover also the feuds lost his time by his ancestor constancy of Chiaromonte.

There followed a period of true and own the squandering of money, with much of the accumulated debts. All his possessions were entrusted to governors and Erari trust and not a few were the causes that saw him involved, including that against the University di Riccia, exposed in detail in the allegation was printed in 1736 entitled: Reasons for the University of Riccia against to the illustrious Prince useful padron of said soil. His death at the end of March 1792, having no successors able, the Regio incamerava taxation the feudal property and private. The accounts with the family de Capua, at least symbolically, were thus closed during the revolution of 1799, with the assault and the partial destruction of the palace. The Abode of the principles of Riccia remained very little, in 1802 the walls now tottering "threatened ruina". The coup de grace was given him by the earthquake of Sant'Anna in 1805. Only the mighty male guard arrived intact up to us. In the period subsequent to the unit after 1848, even in the agro riccese rampant different bands of robbers, linked to the names of Pelorosso, Varanelli and Caruso. The men of Varanelli and especially of the Caruso continued to plunder the countryside of agro practically until the end of the sixties of the XIX century.

Certainly deserve a visit the medieval castle, the Church of Santa Maria delle Grazie, which was originally the mausoleum of Di Capua and the Museum of Arts and Popular Traditions, hosted inside the ancient Magazeno Di Capua, a part of the castle that was used as a warehouse of wheat until the end of the feudal period. The palace to the hut is decorated by bastions and a loggia.

In the small courtyard of the Mint, dating back to the fifteenth century, a few steps from the complex historical-architectural plan of the Court, you can admire some depressed arches, resting on columns of Doric style, quite worn but from which can be glimpsed still in the frieze stretches of metopes and triglifi. Present also the external staircase to gain access to the upper floor.

Piazza Giordano, 28, Oratino (Campobasso)
23.68 Kilometers from Riccia
Prior's Tower
The Palace and the Tower of the Grand Prior of Alberona, in Puglia, dates back to the XII century.

Piazza Civetta, 11, Alberona (Foggia)
24.60 Kilometers from Riccia
Oratino Tower
The tower is located on a rocky spur near Oratino in Molise.

Strada Provinciale 41 Garibaldi, 32, Contrada Rocca, Oratino (Campobasso)
24.87 Kilometers from Riccia
Norman Tower
From the top of the Normar Tower you can enjoy a wonderful panorama upon the village of Pietramon...

Piazza Giordano, 28, Oratino (Campobasso)
23.68 Kilometers from Riccia
A' Rejecelle
Located in the heart of the ancient village is one of the most unique and characteristic places o...

Via Salvatore Marinucci 2 - 86039, Termoli (Campobasso)
57.53 Kilometers from Riccia
Cathedral of Termoli
It is built on the highest point of the Borgo Vecchio of Termoli

Recipe: The Calzone of San Giuseppe in Riccia
Riccia's calzone, called "cavezone" which means just calzone, is the typical cake of the Festa di San Giuseppe. The dough is very delicate and the filling is particularly velvety. Its particularity lies in the filling, consisting of: chickpeas, honey and/or sugar and essence of cinnamon or vanilla or cedar. Ingredients (For 100 pieces)For the pastry:• 2 kg of soft wheat flour• 1 egg• Pig f...
Continue