Share
Larino is one of the most important tourist resorts in Molise. In the past it was an important Roman municipium and it is at that time that the suggestive ruins of the amphitheater and the villas with splendid mosaic floors date back. In the center of the village, in addition to the beautiful ducal palace of medieval origin, the cathedral dedicated to San Pardo and the Assunta is worth a visit. 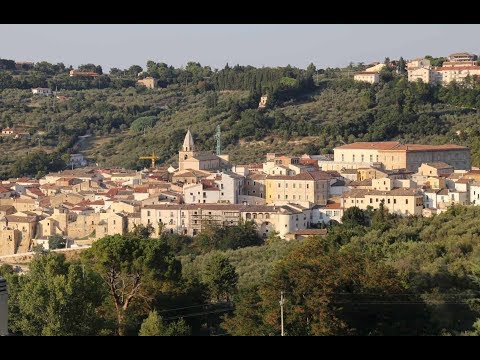 The village of Larino is located in Molise. Noteworthy are the historical testimonies of epochs, especially Roman times, with archaeological sites of great interest such as the amphitheater, the spas, the hole and mosaics of medieval times such as the Romanesque-Gothic Cathedral dedicated to the Saint Patron Saint Pardo, from its unique and unique 13-rays rose garden, the Ducal Palace founded in the eleventh century and in the extended and modified centuries, now the seat of the Civic Museum, the Municipal Library and the historical archive, the museum and the Diocesan archive all inside the Bishop's Palace, the Convent of the Cappuccini brothers and some palaces and noble villas of the eighteenth and nineteenth centuries. In the vicinity of Larino there are numerous olive groves, which are the most prevalent crops in the area and which produce an excellent quality olive oil (from the native larch Gentile di Larino). Other typical crops are vine, cereals and vegetables.

Urbs princeps frentanorum called it the ancients, to underline the importance of the past in this important city of the Low Molise, which was one of the main centers of the Frentani territory. Its foundation is likely to be dated around the 12th century BC. by the hand of the Italic people of the Osci, who gave it the name of Frenter. Subsequently the city was destroyed and rebuilt with the name Ladinod, as transcribed on numerous ancient coins found in larned territory. With the passage of centuries, this term changed in the Latin name Larinum, later deformed in Larina, then in Alarino, to reach the present form of Larino in the nineteenth century. Following the Sannitian wars, the city was conquered by the Roman Republic (319 BC) and became a res publica, maintaining its own autonomy over other frentee cities. The name was changed to Latin Larinum, the place where the Frentani had the Lari. During the Second Punic War (217-201 BC) was a battle theater between Annibale's army, camped in nearby Gerione, and Fabio Massimo, dictator in Larinum. After the fall of the Roman Empire, the dominance of southern Italy by the Lombards (VI - X century AD) influenced Larino's life, which became an integral part of the Benevento Duchy, maintaining a certain legal autonomy guaranteed by the presence of a With you. In fact, it was at the head of one of the 34 counties in which the Benedictine Duchy was subdivided. The traditional date of 842, associated with the memory of the translation of the relics of the patron S.Pardo from the city of Lucera to Larino, sanctions the definitive exodus from the ancient Roman city, located on the hill and easily accessible from Saracen and Ungare incursions coming from coast, towards the most hidden underlying valley and set on a rocky spur of course. The historical center is characterized by the Palazzo Ducale and the Duomo, from some monuments of medieval and Renaissance times. The towers, the villas, the walls and some of the churches in the village witness a social life that has evolved in the past centuries. Many are the palaces of the local historical families that have had weight in Larino's life.

They certainly deserve a visit to the Roman Amphitheater of the ancient Larinum, the Cathedral of San Pardo and the Ducal Palace.

The municipality is part of:
City of flavors
City of Oil

Villa Zappone Archaelogical Park
At Villa Zappone Archaeological Park of Larino, in Molise, it is possible to admire the remains o...
Via Giuseppe Mazzini, 5, Larino
St. Pardo's Cathedral
the basilica of Santa Maria Assunta and San Pardo, is situated in the village of Larino, in Molise.
Via Raone, 1, Larino
Roman Amphitheater of Larino
The Roman Amphitheater is evidence of the importance of the city in the historical period.
Via Dante Alighieri - 86035, Larino
A' Rejecelle
Located in the heart of the ancient village is one of the most unique and characteristic places o...

Via Salvatore Marinucci 2 - 86039, Termoli (Campobasso)
22.11 Kilometers from Larino
Castello Svevo
This castle is the most representative structure in the coast of Molise. It was built around the ...

Via Montecastello, 86039, Termoli (Campobasso)
23.78 Kilometers from Larino
Cathedral of Termoli
It is built on the highest point of the Borgo Vecchio of Termoli

Piazza Duomo - 86039, Termoli (Campobasso)
23.93 Kilometers from Larino
Oratino Tower
The tower is located on a rocky spur near Oratino in Molise.

Piazza Cattedrale, Trivento (Campobasso)
29.90 Kilometers from Larino
Castello Svevo
This castle is the most representative structure in the coast of Molise. It was built around the ...

Weekend in Molise, Larino, Oratino and Frosolone
Almost equally divided between mountains and hills, the lands of Molise, land of villages, small towns and sea. That Adriatic sea on which one of its main cities, Termoli, is also the main port. From here begins the discovery route in the heart of this often unfairly forgotten region. It is the Sannitica highway, which stretches out in the countryside from the coast to the heart of the region, leading us to Larino. Before leaving the car an...
Continue
Carnival is fried!
Photo by lacucinaitaliana.it Fritters, tortelli, castagnole, chiacchiere, fritole, graffe, Strauben: during the Carnival period, the scent of sugar and fried sweets is the undisputed protagonist in the streets of every village. The names resound in the local language, the dialect, to which are linked childhood memories and ancient stories, gestures used in the family and tales that enchant children. Like that of the Cremasque carnival, which every year fill...
Continue