Share
Colfosco is the inhabited village higher of Alta Badia and is a tourist center well equipped, which is located in the heart of the Dolomites. The two small villages of Corvara and Colfosco had stories clearly distinct and have done part of even different territories. Although the two towns have developed one next to the other, there are considerable differences in their history. 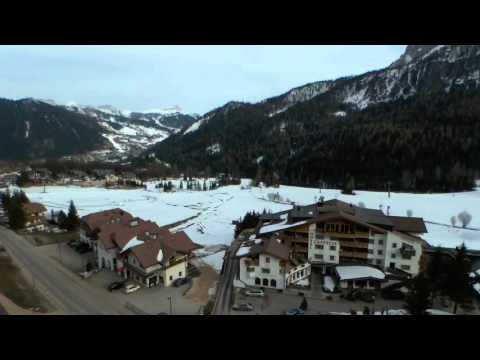 Colfosco appears for the first time in a document of the year 1153, from which it emerges that the count of Sabiona bought Colfosco by the abbot of San Candido, and the locality at the time seems to have been only a pasture on which the peasants of Laion and Val Gardena facilitated their herds to graze. With the passing of time gi dwellers seasonal first, then began slowly to settle and remain even in winter, and no longer only in summer. The first Masi di Colfosco were, as was the custom of the historical moment, the property of the noble families.

While in Corvara you have historical news only from 1292, and belonged to the time to the ancient lordship of the Val Badia, and belonged to the jurisdiction of Marebbe, Colfosco instead it has trace certain already a century and a half before precisely from the year 1153, and the town was part since 1296 the jurisdiction of Selva di Val Gardena, beyond that of the bishopric of Bressanone, and was annexd to the Val Badia only in the year 1828.

Given that was part of the parish of Laion, people of Colfosco went to Mass in the parish church of the latter village and carried there its dead for burial, and path passed for Puez, Val Long and Gardena, whereby ecclesiasticamente, Colfosco is belonged first to the parish church of Lajen, then to Curazia of Santa Cristina in Val Gardena.

In the summer it is the starting point for many walks and vie ferrate; instead, during the winter, offers numerous trails for all the difficulties with the connection with the rest of the valley and with the neighboring valleys, being included in the circuit of the Sellaronda.

Both Corvara and Colfosco have acquired international fame in the XIX and XX century, when they began to be appreciated for the skiing and hiking.

In 1947 was completed and tested the first chairlift of Italy precisely in Corvara, that connected the inhabited area to Col Alto, starting a process of intensification of the tourist industry and skiing that has seen a particular increase in the seventies, creating many jobs for the local population and also for people who came from other regions.

Via Platten, 6E, Castelrotto (Bolzano)
22.33 Kilometers from Colfosco - Kolfuschg
Sabiona Monastery
The Sabiona monastery rises on a high cliff that supervises the village of Chiusa in Isarco Valley.

Via Pucher, Chiusa (Bolzano)
23.90 Kilometers from Colfosco - Kolfuschg
Civic Museum of Chiusa
The Civic Museum of the village of Chiusa has located in the premises of the former convent of th...

Strada Tor, 65, San Martino in Badia (Bolzano)
14.44 Kilometers from Colfosco - Kolfuschg
Civic Museum of Chiusa
The Civic Museum of the village of Chiusa has located in the premises of the former convent of th...

Via Sottoguda, 56, Rocca Pietore (Belluno)
15.78 Kilometers from Colfosco - Kolfuschg
Apartment Sol E Nef
Sol e Nef: the independence of living in an apartment, the carefree atmosphere of a holiday witho...

Via Pian, 6 - 32020, Rocca Pietore (Belluno)
15.87 Kilometers from Colfosco - Kolfuschg
Appartamenti Ciesa Padon
Situated near the magical Borgo of Sottoguda, our house is the ideal place for spending a comfort...

Via Sas Negher, 8 - 32020, Rocca Pietore (Belluno)
16.20 Kilometers from Colfosco - Kolfuschg
Stay Dolomites
Stay Dolomites it was born with the aim to make people fully live the experience of the village a...

Via Capoluogo 39, Rocca Pietore (Belluno)
16.55 Kilometers from Colfosco - Kolfuschg
Hotel Seelaus
Your Hotel in the Alpe di Siusi at 1,800 m directly at the slope and the hiking paths

Via Compatsch 8 I-39040 Alpe di Siusi , Castelrotto (Bolzano)
17.90 Kilometers from Colfosco - Kolfuschg
Hotel Cima Dodici
If you like mountains, you can’t ignore a hotel that has the mountain in its own name.

Via Henrik Ibsen 17, I - 39040 , Castelrotto (Bolzano)
21.79 Kilometers from Colfosco - Kolfuschg
Albergo Zur Post
In the heart of the medieval town of Glorenza, in the middle of the Venosta Valley, Hotel Posta o...

Via Flora 15 - 39020, Glorenza (Bolzano)
99.92 Kilometers from Colfosco - Kolfuschg
Hotel Walther von der Vogelweide
In our opinion it is the best place to have a stay in Chiusa. It is located in a building in the ...

Via B.-J.-Grasser. 4 - 39020, Glorenza (Bolzano)
99.60 Kilometers from Colfosco - Kolfuschg
Johannserhof
Open from October to March, the farmstead run by the Brunner family produces an excellent Müller ...

Via Geizkofler 15 , Vipiteno (Bolzano)
49.81 Kilometers from Colfosco - Kolfuschg
Cantina Valle Isarco
The winery is suitable for aromatic and fruity whites.

Loc. Coste 50, 39043, Chiusa (Bolzano)
23.16 Kilometers from Colfosco - Kolfuschg
Laimburg Winery
Laimburg Winery, in the province of Bolzano, is part of one of the towns on the South Tyrolean Wi...

Sotto i Portici 3, Glorenza (Bolzano)
38.36 Kilometers from Colfosco - Kolfuschg
PUNI distilleria
Outside the mighty walls of Glorenza there is the PUNI distillery, the first and only whisky dist...

Via Mühlbach 2, Glorenza (Bolzano)
99.41 Kilometers from Colfosco - Kolfuschg
Dolomitissime
With 5 offices on the Dolomites territory...

Summer 2018 in Val D'Ega among villages, farms, rides, legends, sleds and fairy tales
At Val D'Ega - in the province of Bolzano - like to think that every day is always a party for children who arrive in the Dolomites with mom and dad. During the summer, in fact, the valley invites young guests to become familiar with the animals and with legends that melt between mountain peaks and woods. From 23 June to 8 September 2018, the program "Dolomites, fables and legends" opens its doors to the fantastic world of ancient tales of the...
Continue
Recipe: Apple strudel from Trentino-Alto Adige
South Tyrolean cuisine is the expression of two great culinary arts: the tasty Tyrolean cuisine and the graft of imaginative Italian cuisine. All with a hint of Viennese, Hungarian and even Bohemian flavor. It is therefore the variety that distinguishes the South Tyrolean cuisine and there is no single recipe for its most famous dessert, the Strudel. If the filling mostly presents variation...
Continue