Share
Defined by many as the most mysterious village in Italy, Rosazza rises along a narrow strip of land between the Lys Valley and Valsesia, once known as the Valle d'Andorno, surrounded by the Pennine Alps. What is striking about this village are its eccentric structures, first of all the Castle, built by Senator Federico Rosazza. This place, beyond the singular appearances, is the custodian of traditions and crafts related to the life of the valley, customs that gradually disappear.

A look at Rosazza 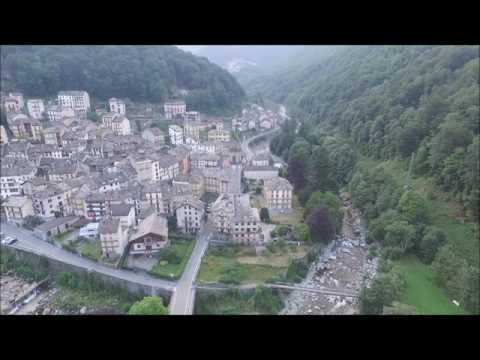 The Valle Cervo is a narrow strip of land between the Lys Valley and the Valsesia, was formerly known as Valle d'Andorno, from the name of the community at the bottom of the valley that included. Here you will be only to the upper part of the valley, a mountain territory of about 73 sq km, that begins from the stranglehold of Bogna and terminates on the arc of the Pennine Alps that surrounds it on three sides and has in top Bo (2556 mt) its highest peak.

The historical news before the tenth century d. C. are scarce and therefore it is not possible to outline a precise profile on ancient facts and on the first settlements residents. Have not been found artifacts or testimonials, but it is certain that, albeit poorly, the valley was inhabited by populations of different origin.
In this border area and transit between Italy and France, in fact, alternated peoples of mediterranean race, coming from the plains, and celtic races which filtered from the mountains. Still today in the toponyms and in dialect is possible to find many words of different leads that have similarities with etymologies of France and Germany, as well as Rome for the continuous presence of the armies of Rome in the area.

In this area rich in forests of beech and chestnut, but also characterized by the massive presence of stone, was not easy for the man find a balance with the natural environment.

The village of Rosazza (Arsassa in Piedmontese) strikes for its whimsical structures, first of all the Castle, built for Federico Rosazza, Senator of the Kingdom and already a member of the Young Italy mazziniana and Grand Master Worshipful Master of Freemasonry biellese. It was launched in 1883 with the raising of the Guelph tower and the Palazzina below, then enlarged in two successive phases and ended in 1899, the year of the death of Federico, with the completion of the great gallery where the noble intended to expose his paintings.

The building was designed by Giuseppe Maffei exploiting the theme of the aesthetics of ruin: false masonry sbrecciate treated with nitric acid, fake colonnades and architraves, in order to recall the ancient temples of Paestum and clear esoteric references to Freemasonry.

The period of access to the castle reproduces that of the city of Volterra; here appear the heads of three of the valley with a five-pointed star among the hair. Other false ruins of Paestum and one of the two bears carved in local stone, placed around the pond of the garden were carried away by a flood of the torrent Pragnetta in May 1916; the remains are preserved today at the fountain in the Valligiana in the municipal park.

The Palazzo Comunale, also designed by Maffei in 1880-81, was wanted in origin by Federico Rosazza to accommodate the seat of the town hall of Piedicavallo, the country from which the time also Rosazza depended administratively. The building instead it became the seat of the municipality of Rosazza in 1909 as a result of communal autonomy obtained in 1906. The building, which Joseph Maffei cared for even the most minute decorative details, are particularly worthy of note the tower adorned by ghibelline battlements and the harmonious scale of white marble that gives access to the upper floors.

This place, beyond the peculiar appearances, is the guardian of the traditions and crafts linked to the life of the valley, customs which gradually disappearing in view also of the great reduction of the local population that over the last hundred years has passed from over 1000 inhabitants to current less than 100.

To passing on the memory of the mountain crafts and traditions is the Casa Museo realized in the center of the country inside some buildings uninhabited and restored by the municipality, it is part of the network ecomuseale biellese and constitutes a great treasure to delve deeper into the reality of this part of Piedmont.

Someone defines Rosazza the "Rennes-le-Château" of Italy, other even the village most mysterious because it is capable of attracting those who have some interest in the esoteric places and mysterious. Rosazza is a village rich in art, history and culture, with monuments that have come down to us perfectly intact, testimony of his legendary past; a place full of charm, also because of its characteristic architectural landscape.

His dwellings, perfectly undamaged, are those typical of the Western Alps, with the roofs of lose, slabs in Luserna stone, which approach harmonically monumental buildings built in 1800 by Federico Rosazza: the Church, the castle, the town hall and the monumental cemetery. All around the borgo la nature dominates uncontested and is the kingdom of those who apprezzaza its beauty still wild, where is possible to meet the ancient mule tracks of connection with the neighboring valleys.

Along the mule track that leads to the castle were made several supporting works, staging points and many engravings made by skillful sculptors of the valley and depicting some of its many legends, the face of his patron saint San Giovanni Battista and original writings of greeting and good wishes.

Son of Anna Maria Mosca Belrosa and Vitale, notary and building undertaker, was born on 4 March 1813 in Rosazza. He began his studies in Valle Cervo and then in the seminary of Biella, oriented to embrace the ecclesiastical career. At the age of fifteen she abandoned the seminary and churches to their own family to be employed in a shipyard in Genoa, a city in which enlargement nineteenth century the family firm had a significant role. He attended the college at the fathers Somaschi Fathers and then went to the university where he graduated in law in 1835. In the course of his studies he befriended various Ligurian patriots such as Giuseppe Mazzini and joined the Giovine Italia. The memory of his wife and his only daughter, both died prematurely, urged him to act in favor of their land of origin and of the local population. In the last thirty years of the Nineteenth Century realized at its own expense numerous public works to improve the lives of their fellow citizens and embellishment Rosazza and Valle Cervo.

Used for these works workers and local materials, thus contributing to the economic development of this mountain area. His faith mazziniana and its links with the masonry the alienated the sympathies of the part of the ecclesiastical circles, despite the fact that between the works he financed were including also some religious buildings (first of all the Church of Rosazza).

The membership to Freemasonry in addition to the interest in the alchemy and in general the esoteric world, up to the Templars, brought him to fill of symbols related to that world all the works he made churches and cemeteries including. Thus in Valle Cervo, and especially in the village of Rosazza, gallery included, we can find dozens of masonic symbols. On 21 November 1892 he was appointed Senator of the Kingdom; died in Rosazza on 25 September 1899.

Frazione Machaby, Arnad (Aosta)
18.64 Kilometers from Rosazza
Roman Gaul Road
Nearby the Fort of Bard are still visible the ruins of a stretch of the ancient Consular Road.

Via delle Grazie, Masserano (Biella)
21.58 Kilometers from Rosazza
Collegiate Church of the Santissima Annunziata
The Collegiate Church is the parish church of Masserano, so called for the presence, a time of a ...

Via Roma, 122, Masserano (Biella)
21.09 Kilometers from Rosazza
Church of the Holy Spirit
Baroque jewel of Masserano, the church of Santo Spirito is located parallel to the entrance road ...

Rosazza, Pentedattilo and Craco: a tour in the name of mystery
In its territory Italy can boast not only tourist destinations of incredible historical, artistic and cultural charm, but also places that can excite for their mysterious past and legends that are lost in time. The Masonic and esoteric mysteries of Rosazza in PiedmontIn the province of Biella, in Piedmont, there is the small village of Rosazza which has only 90 inhabitants, but is often defined as the most mysterious town in...
Continue