Share
The workers' village of Crespi d'Adda, for the exceptional state of conservation of its historical and architectural heritage since 1995, is part of the UNESCO World Heritage Sites. The village is located between two rivers and in a protected area of the North Adda Park, ideal for walking or cycling in the green. From here it is easy to reach the Leonardesque itineraries and other monuments and assets of historical, artistic and architectural interest

A look at Crespi d'Adda 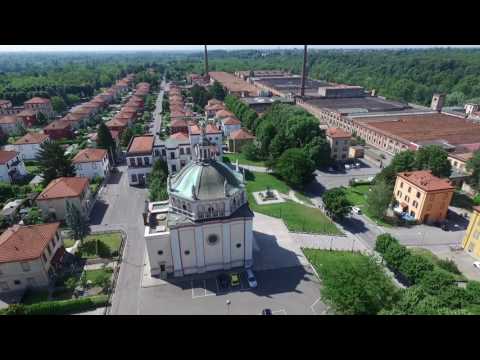 Crespi d'Adda is a village for the workers operating in the textile sector cotton risen at work by Cristoforo Benigno Crespi from 1875 and then passed into the hands of the Son. For the exceptional state of preservation of its architectural and historic heritage since 1995 is part of the Heritage of Humanity by UNESCO.

It is in fact the village is the best conserved in southern Europe, although there are similar examples, they are concentrated more in Europe northern center, between those who are located in Italy, such as the village Leumann in Collegno and the new district worker of Schio in the province of Vicenza, have some architectural changes in successive periods that Crespi are not present since the property of the company and inhabited was joined up to the seventies.

The village was built during the last quarter of the nineteenth century by the family Crespi, who chose this area, close to the river Adda, to build a cotton mill. The foundation goes back to 1878, the year in which the bustocco Cristoforo Benigno Crespi bought 85 hectares of land from the municipalities of Capriate San Gervasio and Canonica d'Adda. The construction works were entrusted to the architect Ernesto Pirovano and the engineer Pietro Brunati. The village was then brought forward by the son of Christopher, Silvio Crespi.

The ambitious project of Crespi was to accompany the establishments - similarly to what happened in the England of the industrial revolution - a veritable village that stay with some plant workers and their families. The infant settlement was equipped with every necessary structure: in addition to the small houses of working-class families (complete with garden and ortho) and the villas for executives (which were built in the following), the village was equipped with the church (copy on a reduced scale of the sanctuary of Santa Maria di Piazza di Busto Arsizio), school, cemetery, hospital just in front of the factory, sports field, theater, fire station and other community structures.

Crespi d'Adda took its final shape around the years 1920 and today it is still recognizable its plant geometrically regular crossed by the main road that connects the village in Capriate San Gervasio. The factory and offices and the manor house are located on the side of the road toward the river, while most of the other buildings are located on the opposite side in a grid marked by three parallel streets to the main.

The village remained the property of a single holding up to 1970, when several buildings, especially residential, were sold to other individuals. In this period you recorded a decline in industrial activity due, among other things, to the depopulation of the village.

In 1889 the village of Crespi, until then included in the town of Canonica d'Adda in the arrondissement of Treviglio, was assigned to the municipality of Capriate d'Adda in the district of Bergamo. On 11 October 2013 the complex of the ex Cotonificio is purchased by the entrepreneur Antonio Percassi with the intention of using it as a headquarters of its companies.

The landscape that hosts the Crespi d'Adda is really unique: the village is inserted in a sort of cradle, a lowland from the triangular shape which is delimited by two converging rivers and by a difference in the level of the ground, a long stretch of coast that surrounds from the north.

The two rivers are the Adda and the Brembo, which form a peninsula called "Isola bergamasca", whose end is precisely the village; while along the coast ran in ancient times the "Fosso Bergamasco", the boundary line between the territory of the Duchy of Milan and the Republic of Venice.

The geographic isolation is accentuated by the fact that the village is connected to the outside only in direction North. Today these geographical characteristics and the degree of social exclusion that they have involved help us to understand how to Crespi d'Adda has been store so extraordinary, hidden and alien to the chaotic development of the surrounding area.

Crespi d'Adda ranks the considerable diversity of styles, oscillating between classicism and romanticism.

The main villa reproposes a medieval style fourteenth-century while the church is exact copy of the renaissance S.Maria di Busto Arsizio, the country of origin of the Crespi. The other buildings are all taste neomedioevale, with precious terracotta decorations - care to the romanticism lombardo - and finishes in wrought iron. Neomedioevale even the Opificio, which expresses the maximum celebration of industry in the central entrance, between the sumptuous buildings of executive offices.

The Cemetery, exotic and eclectic style, is a national monument: inside the chapel Crespi, a pyramid-tower of strain and cement decorated stands to embrace the tombs workers, small crosses arranged ordered in English lawns.

Via Maggiore, 25, località Gradella, Pandino (Cremona)
19.12 Kilometers from Crespi d'Adda
Ancient Icebox
The ancient icebox of Amagno, in the Imagna Valley, is located near the village of Strozza.

Via Castello, 13, Pandino (Cremona)
21.26 Kilometers from Crespi d'Adda
Cornabusa Sanctuary
The Sanctuary of Cornabusa is located near the village of Sant'Omobono Terme, in the Imagna Valley.

Piazza Dante, 8, Gromo (Bergamo)
51.44 Kilometers from Crespi d'Adda
Ancient Icebox
The ancient icebox of Amagno, in the Imagna Valley, is located near the village of Strozza.

That night when I set foot for the first time in the mysterious village of Crespi d'Adda
One of the periods that most affected my life was undoubtedly the one at the age of majority. I was studying hard to get the driving license that finally allowed me to get out of the shell of my village in the Brianza near Bergamo. It was the period of the first trips with elder friends, already driving, the spring period of 1992, when, to impress the beautiful girls of the company, we took them to visit old churches and hidden beaches along t...
Continue