Share
The village of Sant'Omobono Terme, in the Imagna Valley, is characterized by the presence of sulphurous water spas which, combined with the tranquility of the area and clean air, make the place suitable for those who want to spend relaxing moments regenerating the body. The territory is characterized by interesting karst phenomena that have given rise to caves of rare beauty such as the Tomb of the Poles, which reveals traces of frequentations dating back to the Bronze Age.

A look at Sant'Omobono Terme 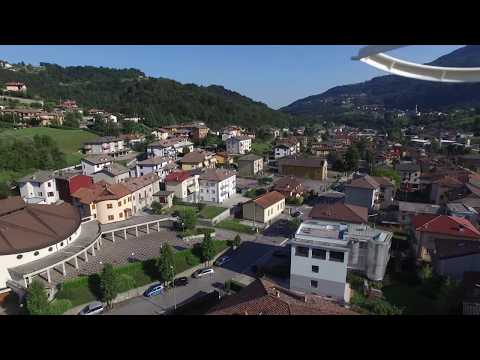 The toponym Sant'Omobono (until 2004 Sant'Omobono Imagna, Santimbù in Bergamo) finds its origin from the patron saint of the fraction of Mazzoleni, which composes the town together with Cepino, Selino High and Low Selino. The origins of the country should go back to the medieval era, when in the area, much more than in the rest of the province of Bergamo, flourished bloody clashes between Guelphs and Ghibellines. The Imagna Valley, predominantly Guelfa, was in sharp contrast with the adjacent Brembilla Valley, siding with the Ghibellines.

The first clashes saw prevail the Guelfs, so much so that the Ghibellines asked aid to the Visconti family, lords of Milan. These managed to defeat their opponents and to extend its dominance over the valleys of the area. The way in which infierirono on opponents brought the Guelphs to seek more times the revenge with more murders. After continuous tipping over in front of the domain of the Visconti and Ghibellines was final, even if the grudge guelfo gave often followed a popular revolts occurred also in Sant'Omobono and suffocated with weapons. The situation was overthrown when the area passed under the control of the Republic of Venice, which in contrast with the Visconti, claimed the deployment guelfo. Followed destruction in respect of the possessions of the Ghibellines, while countries Guelfi, including Sant'Omobono, had a favorable treatment.

The following centuries saw no significant events involving the small community that, strong of its insulation, followed the events of the rest of the province without joining in a direct way. Starting from the end of the XVIII century the territory began to carve out a certain reputation thanks to the presence of sulfurous waters very valuable, whose qualities are set out in the writings of John Bridge Maironi. These were classified in the first half of the XIX century, as among the best known on Italian territory, giving rise accordingly an industry linked to their exploitation, so important to allow the change of name.

The territory is characterized by the presence of thermal baths of sulfureous waters that, joined to the tranquility of the area and to the clean air, make it the ideal place for those who want to spend relaxing moments, regenerating the body. Very interesting is the Villa delle Ortensie, placed to the side of the baths. Dating back to the nineteenth century, has lines very refined and elegant, also thanks to a recent restoration. In the religious context deserve mention the churches of the four countries that make up the municipal territory. The Mazzoleni, dedicated to Sant'Omobono, presents a majestic appearance with eighteenth century lines. Dating back to the second half of the XIX century, preserves works of good quality; the parish church of Cepino, dedicated to San Bernardino, was built in the XVI - XVII century with a structure with a nave in place of a previous building of worship. Inside are works of Gaetano Peverada.

The building of greatest appeal to Valsecca is undoubtedly the parish church of St Mark the Evangelist. Built in the course of the XV century, but subject to successive enlargements (XVIII century) and restructurings (20th century), has in its interior paintings of good quality, but above all a crucifix in wood works of Fra Giovanni da Reggio. To Selino top there is the parish church of San Giacomo, built in the XVIII century with a neoclassic style, has sculptures created by the Fantoni school and paintings by Francesco Quarenghi. At last the church of Santa Maria Immacolata that, placed in the hamlet of Selino low, was built in the early twentieth century.

However the building most popular at the religious level is undoubtedly the sanctuary of Cornabusa. Very frequented not only by the people of the valley is a Church fully formed in the rock, element that makes it unique in its kind. Built in the XVI century is located in the center of a popular legend that would rise in the medieval period, when an elderly woman took refuge in a natural cave to take refuge from the struggles between Guelphs and Ghibellines. Once terminated the clashes, this left the place a statue of the Madonna, found some time later by a young deaf and dumb that, after the discovery, he felt immediately healed.

località Amagno, 31, Strozza (Bergamo)
4.87 Kilometers from Sant'Omobono Terme
Municipal Casino
The Casino together with the Grand Hotel cooperated to create an effective tourist attraction for...

Palazzo Tadini, Via Tadini, 40, Lovere (Bergamo)
41.66 Kilometers from Sant'Omobono Terme
Villa Crespi
Villa Crespi was the manor house of the Crespi family in the village of Crespi d'Adda, in Lombard...

Via Tesuolo, 1, località Boario Spiazzi, Gromo (Bergamo)
35.95 Kilometers from Sant'Omobono Terme
Municipal Casino
The Casino together with the Grand Hotel cooperated to create an effective tourist attraction for...