Share
The village of Sant'Agata de 'Goti is divided into two parts: a modern one, built from the end of the 19th century and the other of Roman foundation, located on a tuff rock. The area is known for the production of oil, wine, fruit (especially apples and cherries), vegetables, cereals and legumes. 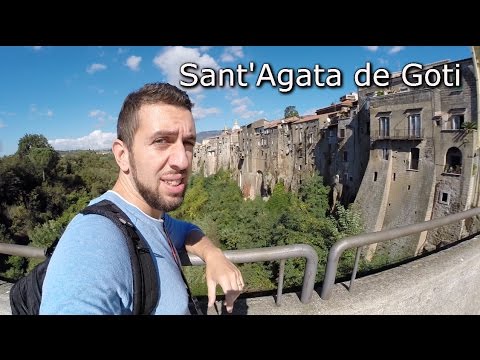 The village of Sant'Agata de' Goti is located at the foot of Monte Taburno, in Campania. The town is divided in two parts: a modern, built since the end of the XIX century and the other of Roman foundation, located on a tuff spur.

His name is formed in various historical periods. In the VIII century Lombard city was entitled to the holy catanese probably for willingness to Radoaldo and Grimoaldo, brothers educated to court Arechi who lived in gastaldia of Sant'Agata. The second part comes from the Norman period instead, with the advent of the feudal lords of the family Drengot after 1117: As is known, Rainulfo Drengot conte di Sant'Agata belonged to the circle of "Potentes" with special faculties and independent power of decision among them to give its name to the fortress. But with time the surname Drengot both in France and in Italy took to be pronounced differently up to mutate into De-Goth.

In the present territory of Sant'Agata de' Goti formerly stood the city sannita of Saticula. In the period in which the Lombards dominated the city the urban fabric citizen of roman origin began to be altered up to disappear altogether, thanks also to the practice of the barbarians to "recycle" materially pieces of structures that belonged to the pagan temples or basilicas considered useless. In this period you laid the foundations of a slow transformation of costumes in the population, eating habits and of peasant habits, some of which still survive today.

In the surrounding territory were created Le Masserie, fortified places where there developed the production of food at the service of the Community, done by Massari gathered in families that gave its name to the farm, exactly as it is still the case today in some cases. The steward of Sant'Agata dwelt instead protected on the hill of tuff, near the ancient Roman Pretorium totally demolished, in a building next to a flap of the underground water, which drew a well. In the Norman period Sant'Agata began to take an appearance similar to the current one. The fortellicium was made starting from the XI century: the Normans exploited the tufa caves already present in the village, using them then as "preserved" and cisterns, some of which can be visited today, and with such a stone built the buttresses attributed to natural costoni: this system, joined to a boundary-houses cortina, yields the impregnable walls to the west, while in the east was enriched by a network of the turrets of sighting. The side of the river Martorano remained always the most impregnable, to which we arrived only in boat, fording the river.

The santagatese territory is traditionally devoted to the production of oil, wine, fruit (apples and cherries in a special way), vegetables, cereals and legumes. Among the specialties of fruit cultivates the annurca apple product, which in 2006 has obtained the mark IGP (Protected Geographical Indication). The fruit is small and crushed, is characterized by its organoleptic properties: white pulp compact, acidulous and perfumed. It was already known and appreciated in Roman antiquity, and cited by Gaius Plinius according known as Pliny the Elder in his Naturalis Historia it locates the origin in the area of Pozzuoli; the annurca apple is cultivated in the whole Campania Region. Of great quality wines, white and red, produced in Sant'Agata de' Goti, among which are renowned especially falanghina, which has received the title of DOC labelled Sant'Agata dei Goti Falanghina and Aglianico, label DOC Sant'Agata dei Goti Aglianico reserve.

The 10 most beautiful villages set in the rock
The Italian territory is rich in wonderful landscapes. Some of the places able to combine history and charm are the villages. From north to south, the villages are numerous and scattered in every region. They can be found in the most varied places: from islands to inland areas, from lakes to mountains, from hidden bays to jagged cliffs. But each of them is capable of making anyone who takes the time to visit them fall in love. Among the most c...
Continue
Fusion between architecture and nature: the most fascinating stone villages in Italy
Embedded in the most solid natural element, stone villages are among the most spectacular building agglomerates in the whole of the Bel Paese. Let's set off to discover some of the best, to mark for an upcoming vacation or trip out of town. From Piedmont to Liguria: Chianale and Apricale The beautiful village of Chianale, nestled in an area on the border between Piedmont and France, is located in the upper Varaita Valley and is surrounded by ...
Continue
5 unmissable wine villages
Gavi, in the lands of Alessandria, Castagneto Carducci, the heart of the Maremma, Sirolo, pearl of the Conero lands, Venafro, in the Molise hinterland and Sant’Agata dei Goti in the Benevento area, are five destinations to discover extraordinary landscapes and discover wines rich in history. Wine is among the treasures of Italy. Extraordinary nectar, excellence exported to every corner of the world, from the Alps to Sicily it produces white and red, light and full-bodied, with and without bubbles. Each region has its places ...
Continue
Unesco Sites in Campania: 6 Wonders to discover
Our country is rich in wonders of inestimable cultural, architectural and natural value: in fact, 53 Italian sites have become part of the UNESCO World Heritage Site. It is a point of pride for our territory that pushes us more and more to turn our attention within our borders and leads us to explore places that have always been known but never visited. Often, these points of interest push the planning of an entire vacation to an Italian region, otherwise, simply, they push us to spend ou...
Continue