Share
It is a village nestled on the slopes of the Murgia, from which it overlooks the city of Bari. The greenery that surrounds it and the Mercadante forest are oxygen reserves for Cassano, and the quiet that dominates it makes it a place of relaxation, where tourists they can live peacefully, welcomed by the calm and cordial hospitality of its citizens.

A look at Cassano delle Murge 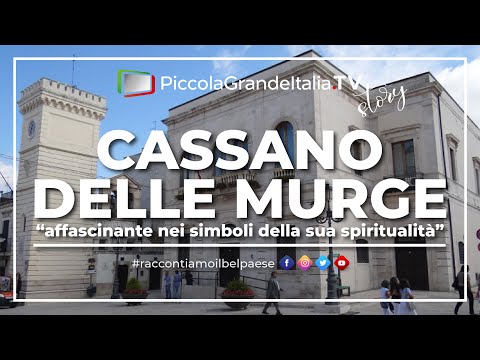 Hundreds of artifacts in stone, paints, various objects found in the caves around the town tell us of prehistoric settlements and the discovery of a menhir, dating back to 2500-2000 B.C. confirms, inter alia, the antiquity of the human presence in these districts. Moreover numerous archaeological finds, trace the origins of Cassano delle Murge to Roman civilization. Always in late ancient period, at a point in the territory known as "Lake of battle" took place a clash concerning the war Gothic Greek between the army of the Roman Empire of the East and the troops of goto Totila, during which it would be distinct, for courage, a woman cassanese dressed as a warrior, that it would fall heroically. To honor his memory, the companions the erected a monument with a pile of stones, said today still "Specchia of femina morta". Due to the typical karst conformation of the territory, there are numerous caves. The largest is located at about 3 km from the village, the cave called "Christ", discovered in the XVII century. 2 km to the east we find the grave of "Pasciullo", deep 180 meters and still to be explored. At 3 km to the south-east, gushes out a source called "Pozzo of cone". In 1000 B.C. settled in Cassano the Apuli that maybe you built a temple to the god Janus. In the XI century Roberto il Guiscardo, duke of Apulia and Calabria, gave the village to the Archbishop of Bari. Toward the middle of the XIV century Cassano belonged to the De Balzo, to Acquaviva, and subsequently to other feudal lords.

according to some derives from the latin name of person Cassius with the addition of the suffix - anus. An alternative hypothesis is that the name derives from the gens Cassia. In epoch altoimperiale the whole Puglia was the subject of the centuriazione by the Romans and then could be Cassianum, i.e. properties of the family Cassia. From excavations carried out, it seems that in the current Piazzetta of four columns you incrociassero cardo maximum (axis Sanges-Via Via Cavour) and the decumanus maximus (axis via Gentile-Via Maj. Turitto). Cassano, moreover, rises on a brace of connection between the via Traiana and the Via Appia and it seems that the area was a staging station and fireplace of the horses. Recently under the floor of Palazzo Miani was discovered a Roman mosaic that attests the existence in that point of a Roman villa, in accordance with customary to build the most important buildings in the vicinity of major crossroads. In Italy there are seven Cassano for which in 1862 has also been added "Delle Murge" to distinguish it from the others. The specification refers to Known Apulian plateau.

The first sensation that the old houses of the historical center of Cassano give the observer, is that of the "totally built". A succession of old and new that, for every year that dies, somewhat loses its original face, subjected, as is, the wear and tear of the centuries and continues to be reworked. A succession of small houses in the heart of the country form a ghirigoro around streets, alleys, streets and arches with openings cramped as pertugi, steep staircases inerpicantisi on the outer sides of the walls, where cavernous tanks of rain water and spring water diffused groans of pulleys and chains. On the other hand, was the unlimited space, determined by the circle of the medieval walls, to dictate its laws and to impose buildings with sopranos, to suggest to use, when the depth of the batch has allowed, the interior space by way of the atrium discovered, disponendovi around the rooms. And there was still the space, imposing building in the array determined blind compartments, securing a typology that still today find frequent applications. Particular reflection of the medieval architecture were, starting from the 12th century, the "tower-houses" which, as the towers, which inspired, had little living value: a shop or fondaco on the ground floor and one or two small superimposed compartments in the upper floors, connected by the steep wooden stairs. In Cassano, which in 1139 had a few hundreds of souls, the architecture reflect those characters whose first, as testifies to the surviving tower-house of Via San Giovanni, transformed with the addition of an external staircase and Porta Soprana. For against, these poor and neglected houses, the one close to the other, with tangled dark roofs, a variety of chimneys, steps that lead to the first floor, and terraces to seat rested at the outer walls, repeated annually by the hands of white limestone, still today, give a look really charming, characteristic, "natural" and form an authentic artistic landscape framed by the overlaying of the smiling hills, which embrace Cassano between west and south, and threatening, seem to put there to separate it from the rest of humanity. In the historic center you can admire the medieval deconsecrated "Church of Santa Maria dei Martiri" with apse; the suggestive crypt of the Crucified One; the Romanesque "campanile of the Chiesa Matrice"; the neoclassical "palazzetto Miani-Perotti" (the work of the architect cassanese Vincenzo Ruffo, pupil of the famous architects Carlo Galli called the "Bibiena" and Luigi Vanvitelli, the author of the famous Reggia of Caserta); the Civic Tower with the Municipal Building and the new Board of Directors Room; two surviving towers of destroyed medieval walls and some chapels six-eighteenth-century.

Cassano takes tourists to the throat. Smells invading the alleys of the historical center that excite appetite by inviting the tasting. The cassanese gastronomy is in great prevalenzqa inspired to products that the land offers: cicorielle campestri, "lampagioni", wild mushrooms and asparagus.
There are typical dishes, as well as genuine, to savor. There is an embarrassment of choice. We have listed some: "cavatidd who peaks de turnips", orecchiette with mixed sauce, "ciqueredde and white beans", "uagnill au fürn and cardeggidde", "fecazze au fürn", "omelets who sprascene" and "stuffed chinigghie au fürn".
Cassano, then emerges not only for its cuisine with popuar traditions, but also for the efforts he has always done to defend and disseminate these traditions.

Our mediterranean climate is considered ideal for development and the cultivation of vine. Of good taste and much sought after are local wines: Primitivo, Sangiovese, Montepulciano, Malvasia bianca and black, Trebbiano, Moscato and Verdeca. Cassano is one of the common falling within the territory of the D.O.C. "Gioia del Colle".

the extensive olive groves which surround our Murge, allow an abundant production and an excellent quality of the oil. The mills are numerous and there you can find both modern facilities that ancient mills that still use the machining systems more traditional. Cassano is counted among the "City of Oil".

Piazza Aldo Moro, 47, Casamassima (Bari)
14.30 Kilometers from Cassano delle Murge
The Church of Santa Croce
The Mother Church of the village of Casamassima, in Puglia, in romanesque style, dates back to 13...

Via Santa Chiara, 3, Casamassima (Bari)
14.43 Kilometers from Cassano delle Murge
Arc of the Shadows
The Arc of the Shadows, in the heart of the historical center, according to an ancient legend was...

Strada Statale 100, Casamassima (Bari)
16.17 Kilometers from Cassano delle Murge
Mother Church of San Giorgio Martire
The Mother Church in the village of Locorotondo is dedicated to San Giorgio, the patron saint of ...

Via Parco del Lauro, 119, Polignano a Mare (Bari)
40.12 Kilometers from Cassano delle Murge
The Church of Our Lady of Sorrows
The Church was born near the town walls that once surrounded the whole ancient village of Locorot...

Via San Vito, 149 - 70044, Polignano a Mare (Bari)
38.24 Kilometers from Cassano delle Murge
Trattoria-Pizzeria Il Cuccundeo
Open at lunch and dinner, this trattoria offers traditional dishes of Apulia with a touch of orig...

P.zza Aldo Moro, 14-70044, Polignano a Mare (Bari)
39.38 Kilometers from Cassano delle Murge
Lilò Norcineria, Ristorante e Pizzeria
This pizzeria is located in the very heart of Bitonto (known as the town of olive-yards)

Via Molfetta, 18/20-70054, Giovinazzo (Bari)
34.20 Kilometers from Cassano delle Murge
Oleificio F.lli Turturro R.e A. s.n.c
In Giovinazzo “Extra Virgin Olive Oil” means the production of the “Turturro family”. For over ...

The mythological God Giano at the origins of the village of Cassano delle Murge
Cassano delle Murge is a charming village in the province of Bari, about 350 meters above sea level. The location offers a panorama of the most spectacular in the region. Known today as a holiday resort, Cassano delle Murge has ancient origins and the name seems to derive from a Roman god. It would seem that the name "Cassano" would originate from the Latin Cassius but perhaps it could derive from the devotion of the Apuli, a people who settled in the area around 1000 BC. and they built a temple dedicated to God Giano. From here c...
Continue