Share
Included among the towns of "Terre Sicane", full of charm and history, Ribera offers a panorama of inestimable naturalistic, environmental, cultural and food and wine value. These aspects give rise to a series of activities aimed at the rediscovery of nature, to those events that enhance religious and cultural traditions. Particular relevance have the typical local products: simple and genuine that satisfy the most demanding palates. 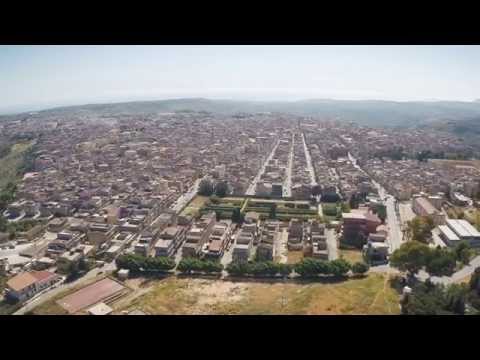 Ribera (Rivela in the Sicilian dialect) is the where Francesco Crispi is born, in Sicily. The geographical position, the favorable climate and the constant presence of water, ensured by the rivers vegetables, Magazzolo and Platani, have made very fertile lands of the territory of Ribera, anciently Allava said. So already in the middle ages many inhabitants of the ancient Caltabellotta there went for coltivarle, realizing productions variegated: rice, cotton, wheat, citrus fruits, almonds, olives and numerous varieties of grapes, fruit of the season and vegetables.

Its origins are traced back to the end of the XVI century, when in a climate of calm, concluded the raids of the Turks in Sicily, many farmers decided to abandon their fortresses and fortified to relocate to areas with most fertile lands, very often leaving behind their debts with the feudal lords. The foundation of Ribera is dated 1635, when Prince of Paternò Don Luigi Moncada, owner of numerous and extensive feuds, decided to save the labors and the energies that their peasants spent to go from Caltabellotta to fields and to establish a Center where these would be transferred, remaining with its dependencies. The choice of the place of the foundation fell on the plain of Stampaci, also called plan of San Nicola (corresponding more or less to the current district of Sant'Antonino), from which it was possible to dominate a large part of the territory and benefit from the sources of water. The village which developed through wide streets and well aligned, respecting the urban policies of avant-garde, was baptized with the name of Ribera, in tribute to his wife of Prince Moncada, Maria Afan de Ribera, daughter of the Duke of Alcalá. In 1841 the Municipality, with a production of 5000 tons of rice was classified as the first center of rice production of Sicily and despite the deaths due to cholera, the abundance of work favored marriages and the increase of the population which counted 5000 people about. The 29 September of that year through a royal decree, the Municipality was then elevated to the Pretura of third class. With the Revolution Sicilian separatist 1848 also Ribera had a revolutionary committee led by Thomas Crispi, whose son Francesco became representative of the town of Ribera The Sicilian Parliament of Palermo.

After landing of the year One Thousand, was constituted a Civic Council and subsequently on 10 April 1861 the town enjoyed for the first time of the major administrative freedom and was elected to the Municipal Council. In those years were suppressed the rice paddies, sources of serious diseases such as malaria. These were years in which the misery and hunger attanagliarono good part of the population. After the First World War the issue of the fight against the landed estates entered in vivo also in Ribera. The population and especially the veterans complained of the absenteeism of the Duke of Bivona that from Madrid enjoyed its riches without any direct contact with the properties and with the workers. In the summer of 1919, the cooperative "Cesare Battisti" led by the pharmacist Liborio Friscia churches at the Opera Nazionale Combattenti (NCBS) the rent of the landed estates belonging to the duke of Bivona, who was also a senator and great of Spain. Arrived in the country in January 1920, don Eristano, willing to sell their possessions to another cooperative, was seized by the fighters of the "Battisti" for three days in his palace, already belonged to their predecessors. In following his release, the duke of Bivona denounced the violence suffered by "Bolsheviks" Ribera, causing the intervention of the government in Madrid, and revenge your landed estates to the cooperative rival of "Battisti", that led by Antonino Parlapiano. On the affair also intervened Antonio Gramsci with a correspondence entitled "The truth about the facts of Ribera" appeared on the next! Of 11 February 1920 and included in his notebooks of the prison.

The flagship of agriculture riberese are oranges of quality Washington Navel, today known with the new brand Riberella D.O.P. The bitter orange was introduced in Sicily from the Arabs during their domination; Ribera is today the territory where there is intensive cultivation of sweet oranges blonds. The cultivation is prevalent in the district riberese is the Washington Navel that alone covers 80% of the entire surface agrumentata which is around four thousand hectares. The fruits, size medium-large (150-250 grams) exhibit at the extremitiesà below a navel (navel) from which it takes the name. The collection begins in November and last until April. The fruit, devoid of seeds, has medium texture, taste very pleasant and very low acidity. In the kitchen is used for the preparation of cakes and salads serve as appetizer or contour for roasts. The dry skin or candied used in confectionery. It is estimated that are cultivated with citrus grove about 3000 hectares of land, with a production around a million quintals, in prevalence oranges.

The Strawberry Ribera, the fruit of small dimensions, are another prerogative of riberese production and are distinguished from the other varieties both the characteristics that for qualityà. In maturation from April and harvested by hand until June, you cultivate between rows of orange trees and peach trees, where you have the climatic conditions and optimal water.

typical products of the local gastronomy are at the basis of oranges: cakes to oranges, biscuits with marmalade, pasticciotti with marmalade. È then usual prepare dishes and typical sweets in occasions of festivitiesà:

Village of Ribera
Municipality of Ribera

The Municipality is part of:
Città slow
Sea villages

Poggiodiana Castle
The Poggiodiana Castle is located in Ribera in Sicily.
Strada Provinciale 36, Ribera
Anguilla Necropolis
The Anguilla Necropolis was discovered in the territory of Ribera, in Sicily.
Strada Provinciale 86, Ribera
Fort of Mazzallakkar
near the waters of Lake Arancio, in the territory of Sambuca di Sicilia, you can find the ruins o...

Contrada Pandolfina , Sambuca di Sicilia (Agrigento)
24.56 Kilometers from Ribera
Puesta de Sol Residence
Puesta de Sol, in Cala Palme, is the ideal choice for those who want to enjoy every moment of the...

Straula. The feast of San Giuseppe