A New Year's Eve celebration by the sea in Senigallia, accompanied by an expert local guide who will lead us to discover the most fascinating villages between Ancona and Monte Conero. 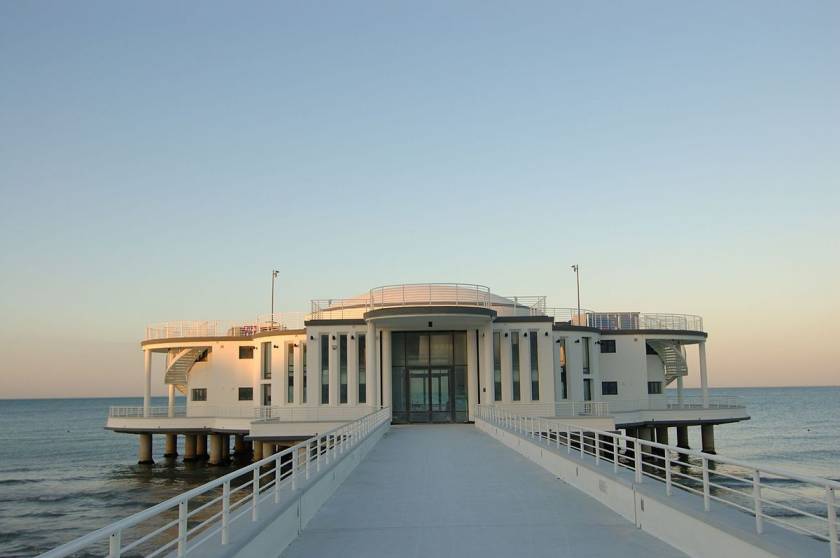 A New Year's Eve to be experienced with an overnight stay at the splendid Hotel Raffaello in Senigallia from which you will discover ancient villages: Verucchio, Ancona, Camerano, Fabriano, the Monte Conero Park with Sirolo and Numana.

Verucchio, the cradle of the Malatestas
Just a few kilometres from the Riviera Romagnola is one of the most beautiful villages in Italy, and the first stop on our itinerary: Verucchio. This is an ancient village that overlooks the Valmarecchia and offers great emotions right from the first glance. Situated west of Rimini, Verucchio boasts a grandiose past; in fact, it was first the centre of the Villanovan civilisation and then became the cradle of the Malatesta family. The visit to the village starts from the Malatesta Fortress, also called Rocca del Sasso. Inside you can see the Malatesta family tree, the rooms of the Baronial Palace, the wonderful courtyards and the Maisto Tower from which you can admire a wonderful view of the village and its surroundings.
We then continue to the Convent of Santa Croce, where there is an ancient cypress tree that, according to legend, was born from a stick planted by Francis of Assisi. The Saint used to lean on that stick during his walk but decided to plant it and so roots and leaves began to grow all around it. The cypress is now more than seven centuries old. The interior of the church is in neoclassical style. On the left side is a fresco reminiscent of the Rimini school of Giotto, the Crucifixion. There is also a wooden crucifix above the presbytery.

Discovering the province of Ancona
One stop that should not be missed is a visit to the capital, Ancona. The city has become one of Italy's major ports thanks to its location. Its history is very ancient, in fact it was founded around 390 by Dionysius of Syracuse. To begin the visit of Ancora, we start from one of the highest points of the city, Colle Guasco, where the Cathedral of San Ciriaco rises, a perfectly preserved Romanesque testimony. The cathedral was built in white and pink stone and inside you can see frescoes and sculptures that make this building a real treasure trove. From the square you can see one of the most beautiful views of the city. Continue to the Museo Diocesano to discover masterpieces representing Ancona art. From the hill towards the sea, a stop at the Mole vanvitelliana, a building designed by Luigi Vanvitelli in 1733 to be used in different ways: as a Lazaretto to keep people coming from countries at risk, as a warehouse to store goods arriving from the port and also as a defensive structure.

The journey continues towards Camerano. From here the route into the underground city will begin, which includes a maze of fascinating caves. An immersion in a magical, mysterious environment of still unknown origins. Numerous communicating caves dug out of the sandstone run through the subsoil of the historic centre in a labyrinthine fashion, revealing to the often astonished eyes of the visitor an almost fairytale-like underground town full of charm, a secret Camerano where historical reality and legend coexist.

The last day of the year is spent in Fabriano with a curious visit to the major exhibition dedicated to Allegretto Nuzi, a 14th-century artist born and raised in Fabriano. The title of the exhibition is "Allegretto Nuzi and the 1300s in Fabriano. Gold and colour in the heart of the Apennines", in the Pinacoteca Civica and, as the title suggests, the exhibition explores the life of the artist, his works and his career. The next stop is the Paper and Watermark Museum, for which this small village is renowned throughout the world. The Museum is located in the former Dominican Convent and shows the history of seven hundred years of papermaking process: use of artefacts, display of watermarks, manufacturing processes and stages in the development of this type of art.

A new year and a new place to visit: the Monte Conero Park. In the Natural Park you can visit the Abbey of Santa Maria in Porto Novo, surrounded by greenery and a short walk from the sea. It was built in 1034 in Romanesque style with white Conero stone on the outside and you can still see the original yellow stone and terracotta flooring inside. You can also see the plaque bearing Dante's verses: "In quel loco fu' io Pietro Damiano, e Pietro Peccator fu' ne la casa di Nostra Donna in sul lito adriano."

From here we head towards Numana, a beautiful seaside village, to see the wooden Cross, a sculpture of great artistic and religious interest that is housed in the town's Sanctuary. It seems that this Crucifix was carved and engraved by Saints Nicodemus and Luke, and it is believed to be the most reliable because it was Luke who took Christ off the cross.
Finally, a walk to the nearby village of Sirolo is a must.

The last stop on the journey is Senigallia. After a stroll through the centre, we visit the Palazzo del Duca, whose name recalls Guidobaldo II della Rovere, who built it in the mid-16th century as a representative residence for his court and illustrious guests, based on a design by Gerolamo Genga. In the Throne Room you can admire a marvellous coffered ceiling by Taddeo Zuccari. Continue to the 16th-century Church of Santa Croce where you can see a work by Federico Barocci representing The Burial of Christ. 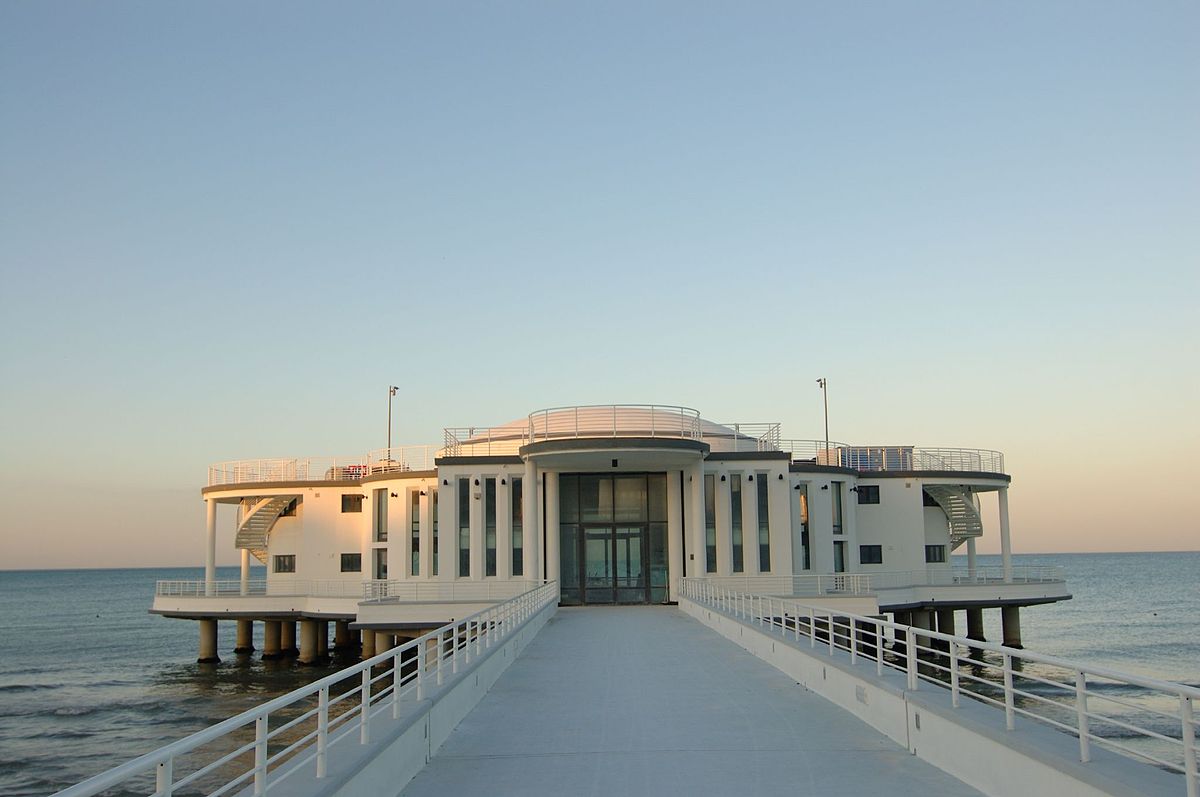 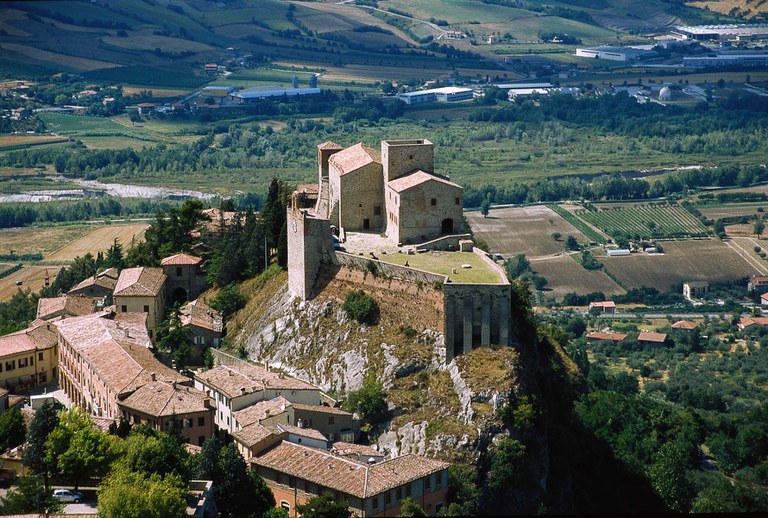 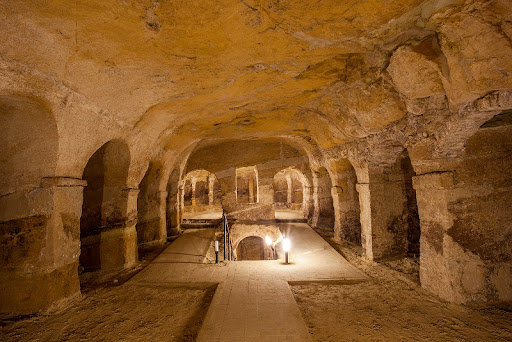 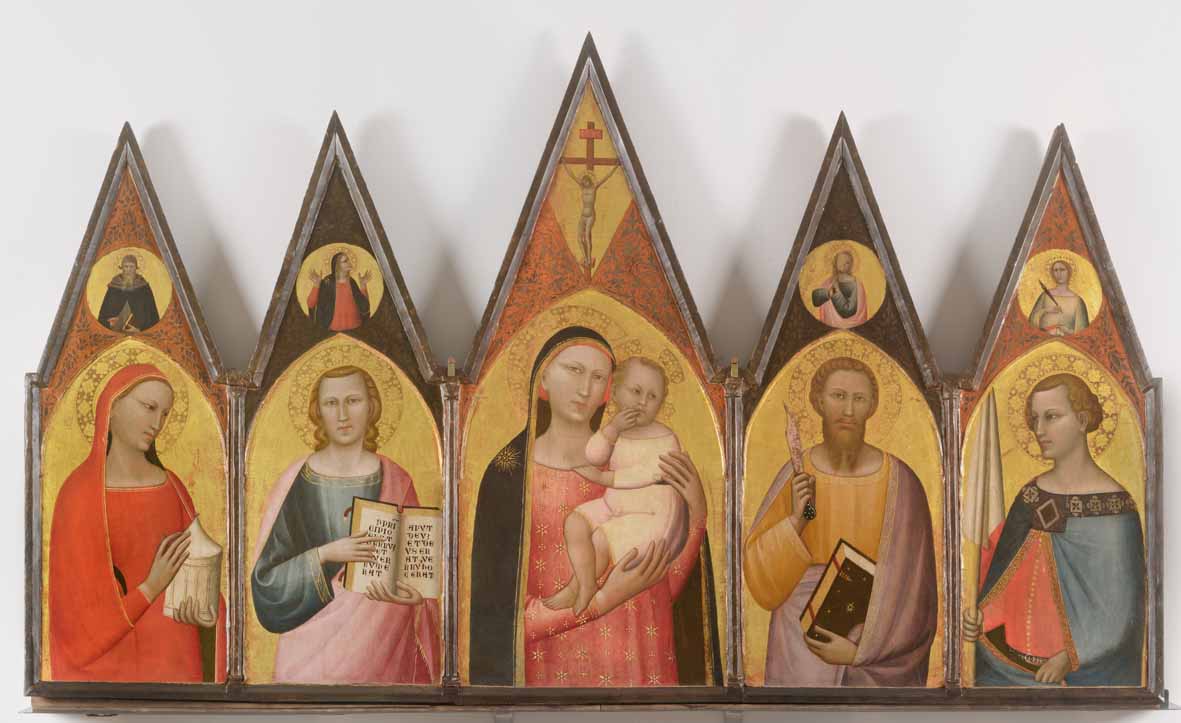 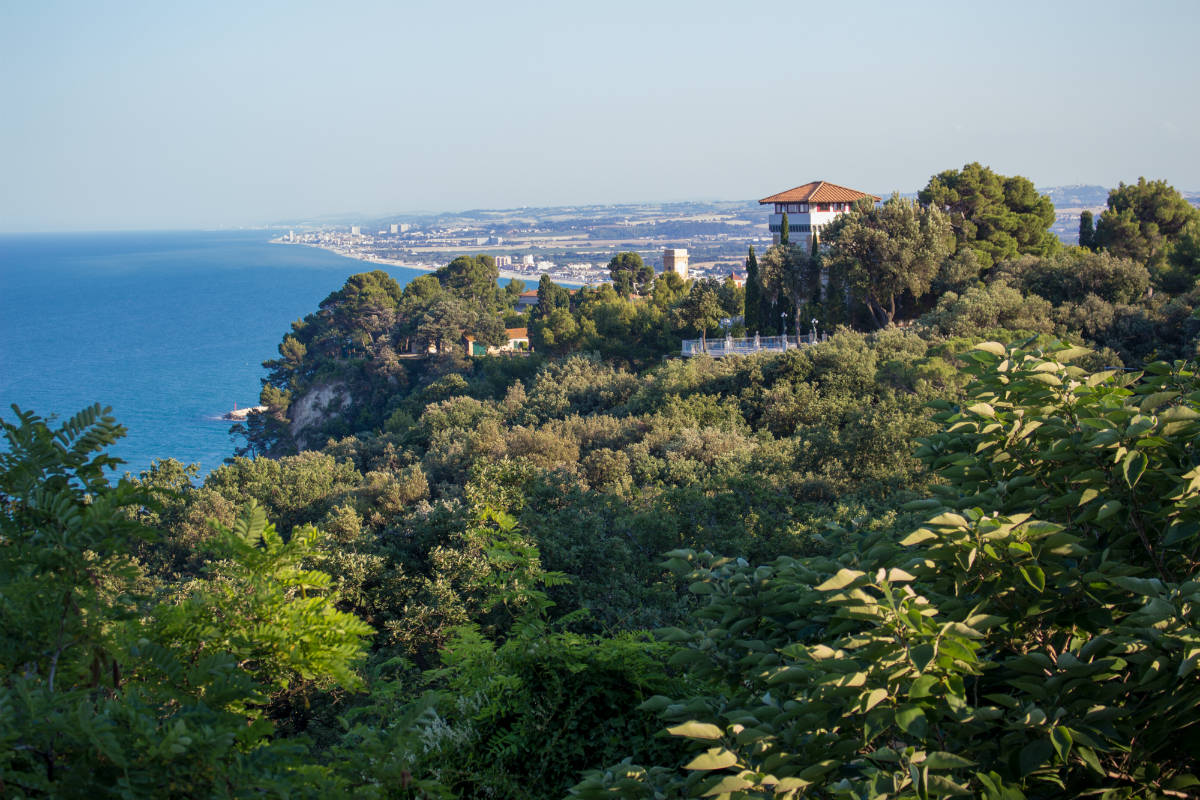 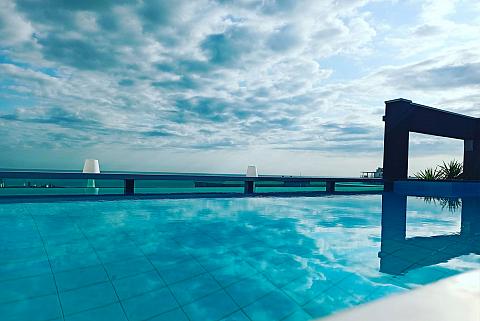 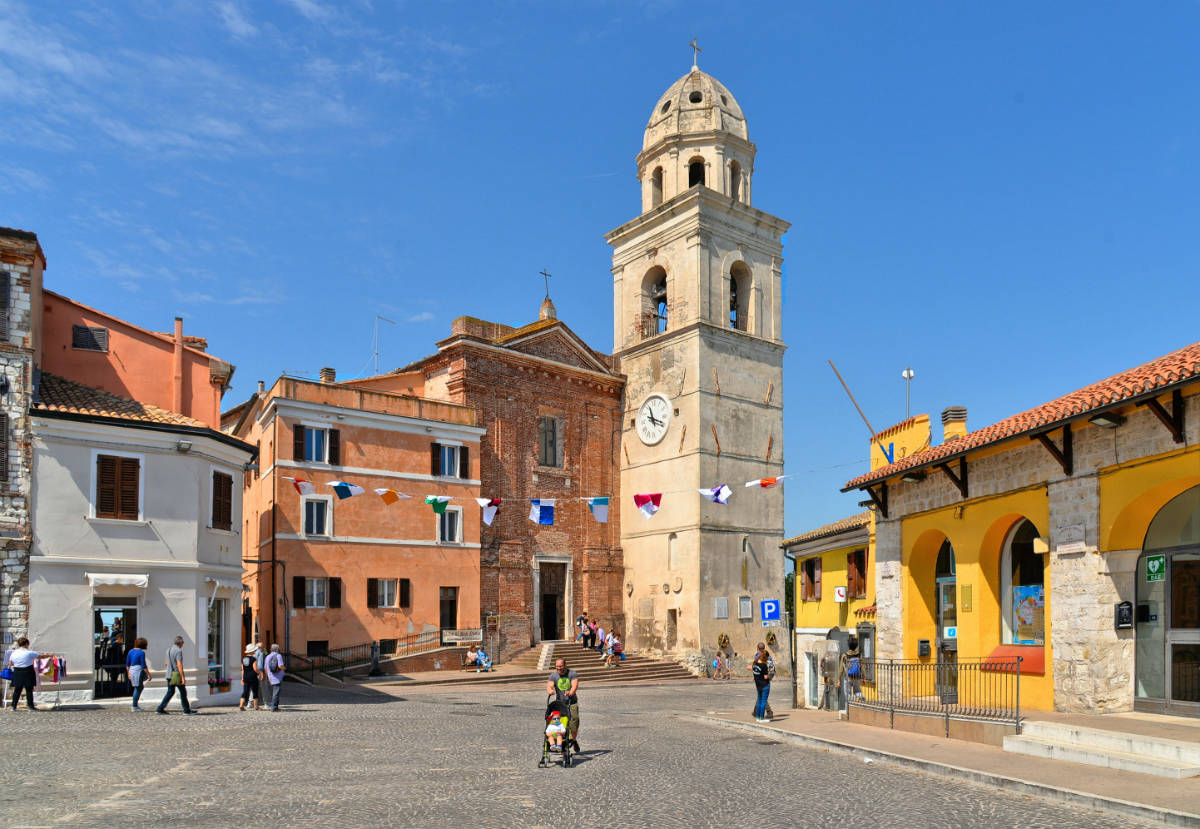 What to see in Camerano

Caves of Camerano
More...
are you an Italian villages lover?
Join our Community
and share you experiences!