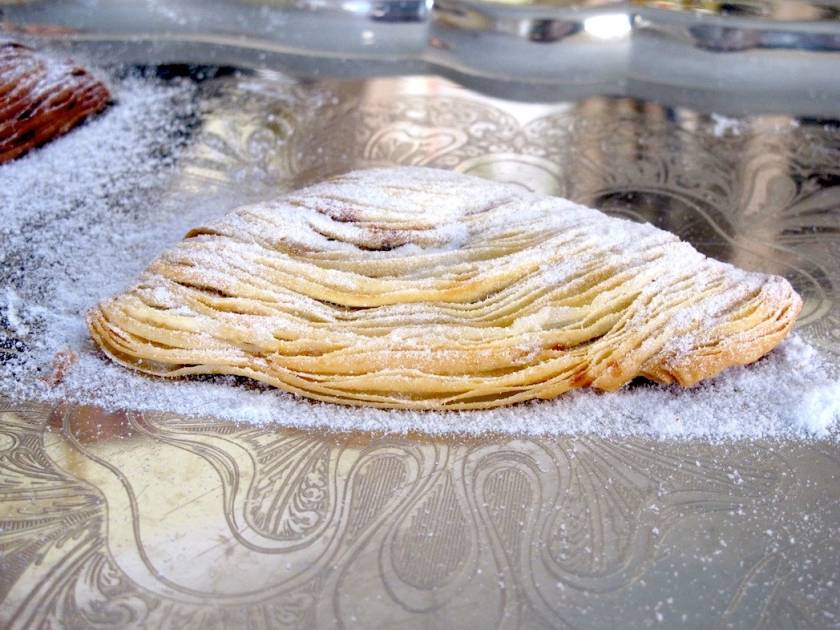 Christmas is approaching and in Naples certainly cannot miss the typical sfogliatelle. Today, however, we will introduce you to their descendants, the Lama dei Peligni puffs. The Lama dei Peligni puff pastry originates from the late 1800s and early 1900s. Its creation is attributed to a noblewoman with a refined palate who made use of local Abruzzo products, creating an incredibly tasty dessert. In the early years of the century, Donna Francesca, mother of Baron Giampietro Tabassi, gave her daughter-in-law Anna Di Guglielmo from Civitella Messer Raimondo, a small village near Lama, the Neapolitan sfogliatella recipe, during a brief stay in Santa Maria Capua Vetere in his home. In 1902, the young woman who settled permanently in Lama, where her husband owned one of the family palaces, brought with her the famous recipe. It was precisely here that the recipe underwent substantially variations from Baroness Annina who thought of adapting it to her tastes and the easy availability of ingredients. The pastry, with the help of lard, became softer, while the filling was replaced with the use of local products such as the Montepulciano grape jam, a vine widely cultivated by all the Lamese families of the time, the cherry jam. that was born spontaneously close to the Maiella that overlooks the town, cooked must and walnuts, then readily available. Another feature is their shape, since they are oval and strongly crushed.
This sweet, simple and refined at the same time, was offered to invited guests and high-ranking diners when they found themselves celebrating special occasions and the jealously guarded recipe never left the walls of Palazzo Tabassi. Only around the 60s, this one spread among the Lamesi thanks to the Tabassi family cook who made the secrets known to some ladies who in turn easily made it in the public domain. To celebrate and promote the goodness of this Lama dei Peligni cake, the Sagra della Sfogliatella is celebrated at the end of April, which attracts more and more visitors at each edition.
Let's see how to prepare them.

For the pastry:
1 egg
1 ladle of lard
1 ladle of water
1 teaspoon of sugar
00 flour in the same amount of lard and water
Salt to taste.

First we prepare the filling. Mix and heat the filling ingredients in a pan, stirring until the mixture is uniform, and leave to cool.
For the pastry, place the flour in the middle of which we will add the other ingredients. We knead carefully and spread the dough until it becomes very thin. We grease the pastry with lard, then fold it on itself until we get a strip of about 10 centimeters, continuing to grease the surfaces from time to time and turn. Roll the dough into a long cylinder which we will cover with the film leaving it to rest in a cool place. Once the lard has coagulated, slice the roll of pastry, obtaining dough rolls that we will roll out with a rolling pin, trying to obtain oval shapes. At the center of each one, place a teaspoon of filling and fold the dough, making the edges adhere well. Bake at 150 degrees for about half an hour and once cooked, sprinkle with icing sugar before serving on the table.

What to see in Lama dei Peligni

Hermitage of Sant'Angelo
Cavallone's Cave
More...
are you an Italian villages lover?
Join our Community
and share you experiences!