Ciaffagnone: the ancestor of the famous French crêpes

A true delicacy of Tuscan street-food, the Ciaffagnone is a typical dish of the characteristic village of the Tuscan Maremma: Manciano. 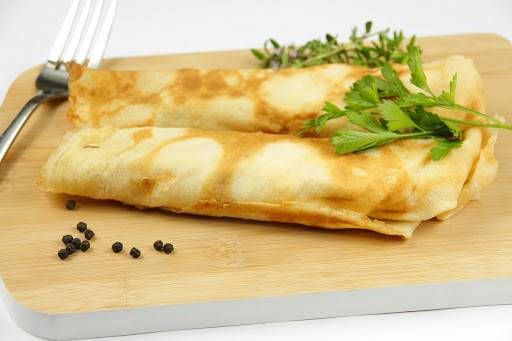 If Tuscany is one of the most enchanting regions in Italy, it owes this not only to its immense artistic and historical heritage, but also to its food and wine, which wins admirers from all over the world. In many cases, some typical Tuscan foods blend with some well-known pages of history, and this is the case for Ciaffagnoni, a true delicacy of Tuscan street-food. It seems that in the Lands of Maremma and Siena, Ciaffagnone has been eaten since the 15th century, particularly in Manciano, a picturesque village in the Grosseto area considered to be the cradle of this typical dish.

The Ciaffagnone: the Tuscan crêpe
Ciaffagnone is a kind of pancake considered the ancestor of the famous French crepes, from which it differs in the use of butter instead of lard and milk instead of water. The first to prepare ciaffagnoni were the cooks of the Rocca Aldobrandesca in Manciano: they cooked them for their lords, including the Aldobrandeschi, the Orsini of Pitigliano and Caterina de'Medici.
Until the 16th century, ciaffagnoni were mainly known in Tuscany, spreading under different names such as "la migliaccia" in Pitigliano and "Pezzòle della Nonna" in Florence. When Catherine de' Medici, who married Henry II of Valois, Duke of Orleans, in 1533, moved to the French court, she brought her retinue of Tuscan cooks with her.

How to taste ciaffagnoni
Thanks to Catherine de'Medici, many French dishes have Tuscan origins: certainly unlike crêpes, ciaffagnoni do not have such an international reputation, but they are the protagonists of local Tuscan cuisine and of certain festivals such as the Festa delle Cantine di Manciano and the Sagra del Ciaffagnone di San Casciano dei Bagni.
Preparing them is really very simple, let's see how to do it.

In a bowl, beat the eggs with a pinch of salt, add the flour and stir with a whisk to prevent lumps from forming. Gradually add the water and continue to beat the mixture until you obtain a batter with a rather liquid consistency, which you will leave at room temperature for at least two or three hours.
After this time, take a frying pan and grease it either with a little oil or with butter; with a ladle, pour a little of the batter into the centre and distribute it evenly over the bottom of the pan. When the crepe begins to pull away from the edges, turn it gently, taking care not to break it. Once cooked on both sides, season the ciaffagnoni with grated pecorino cheese - the original Tuscan recipe - or with sugar, jam or chocolate cream (if you prefer them sweet). Tuscan crespelle can also be used to make a tasty lasagna, by placing them in a baking dish and stuffing them in layers with meat sauce, parmesan and béchamel.