What to see in Tuscania, Viterbo, Lazio 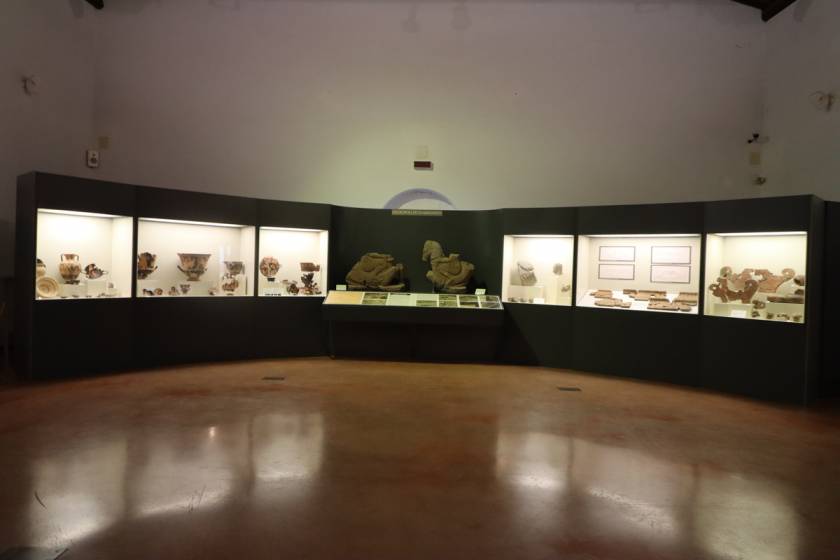 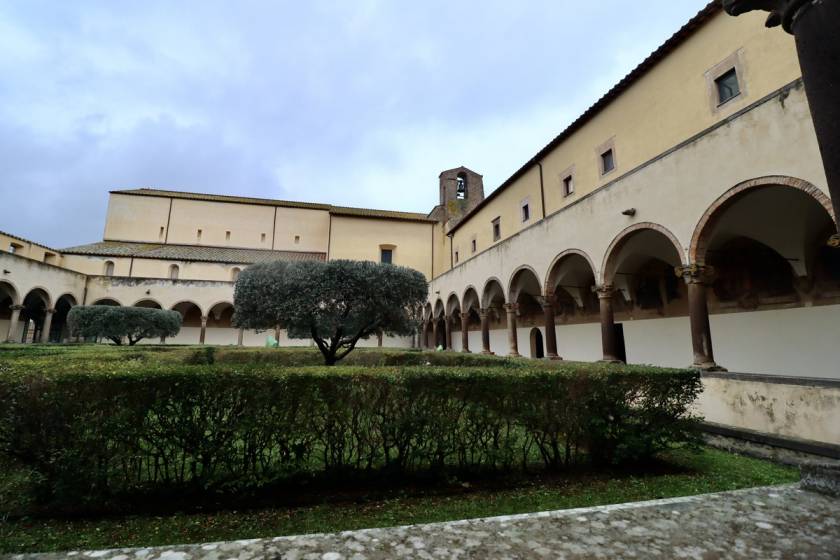 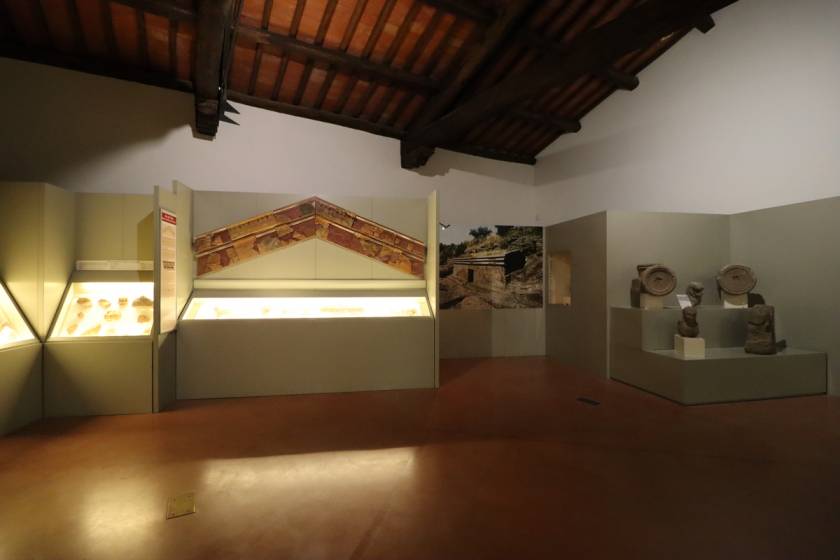 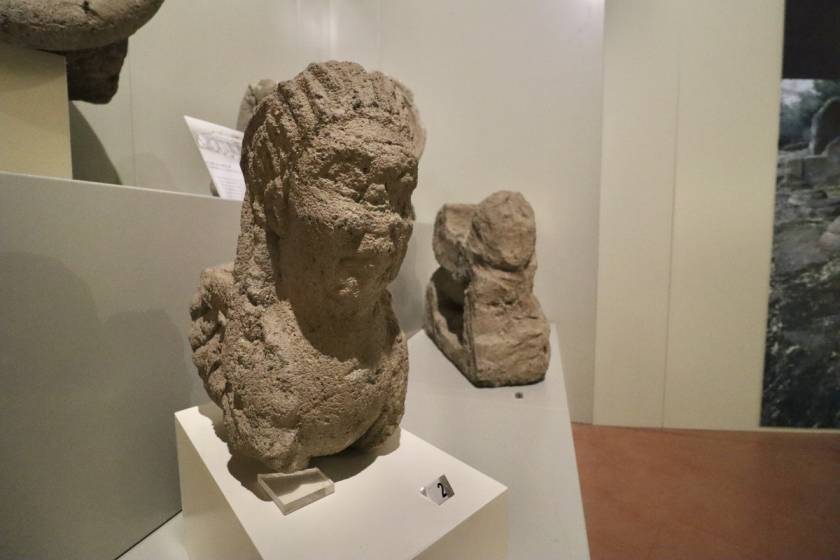 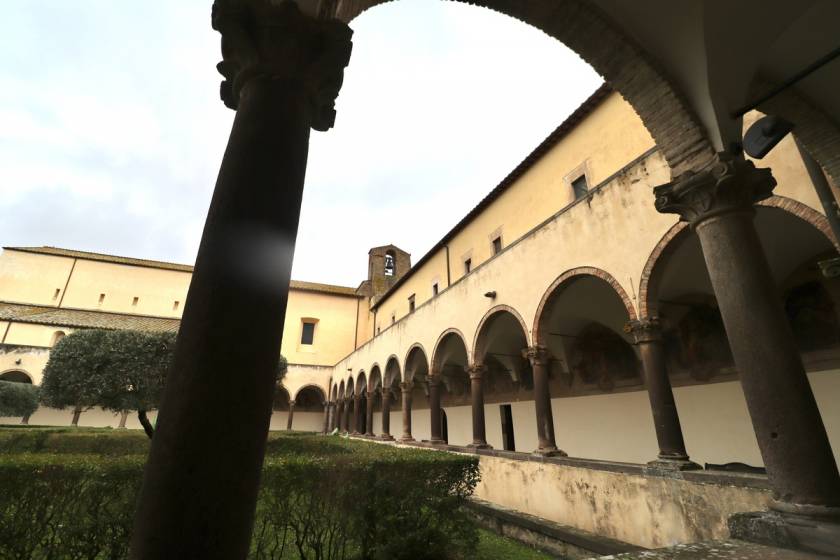 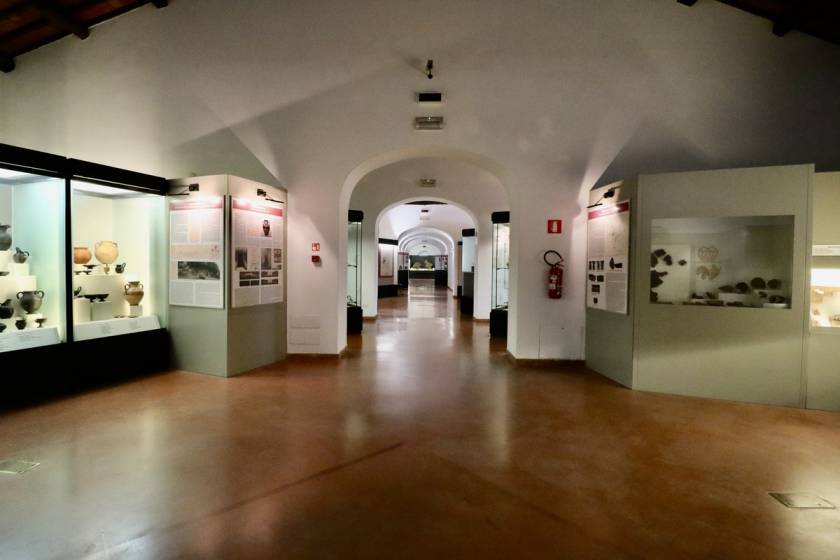 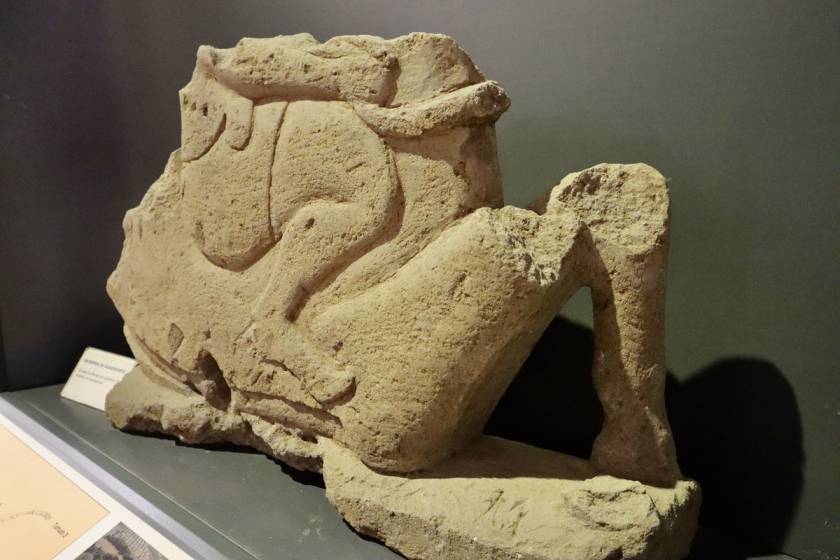 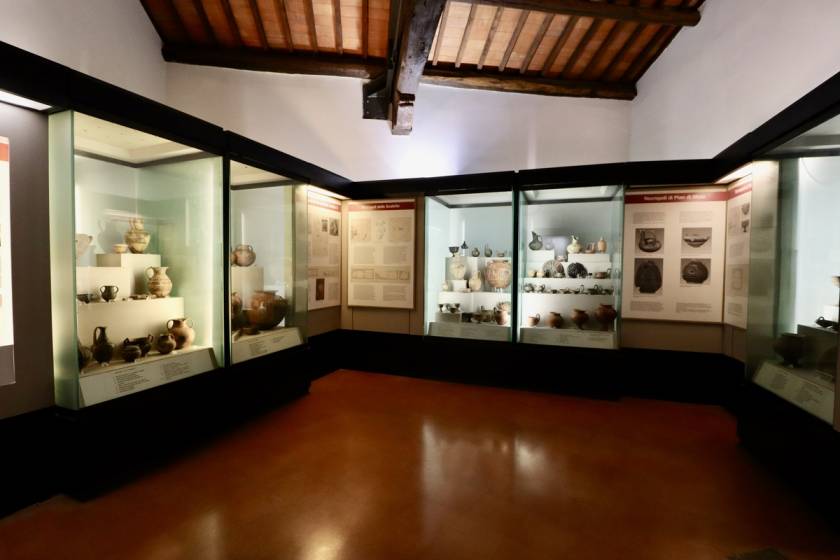 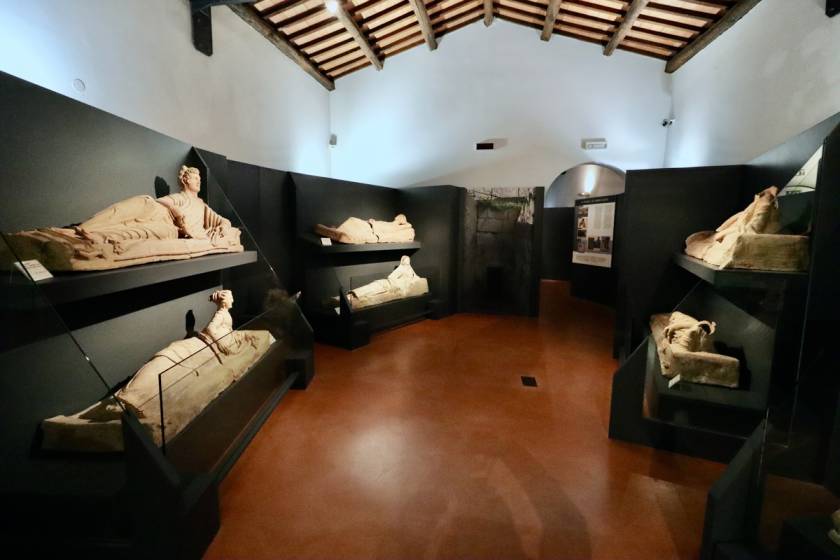 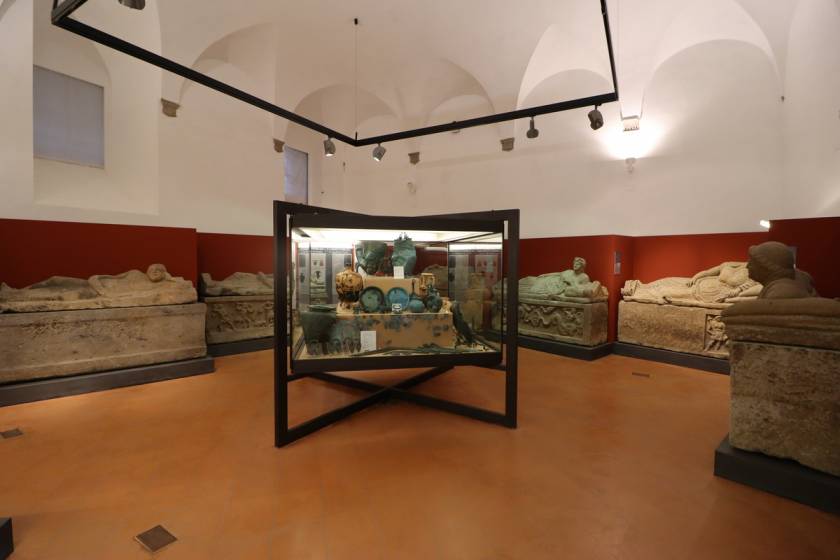 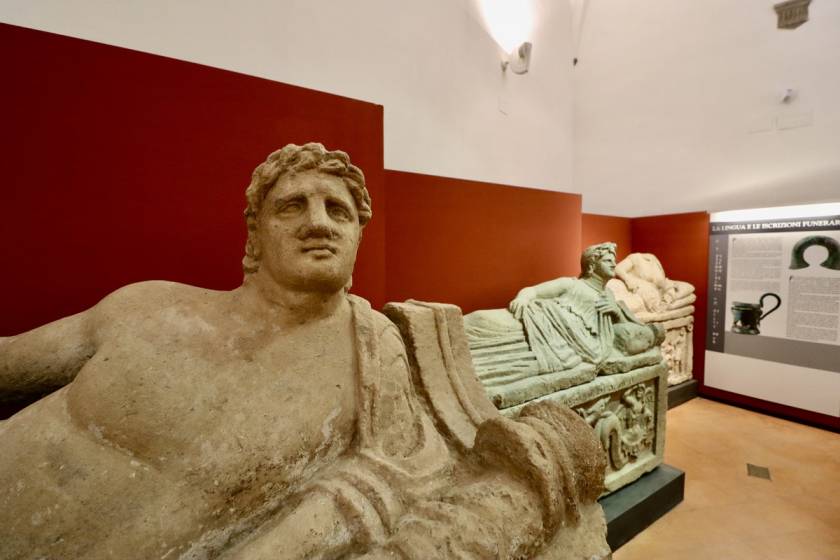 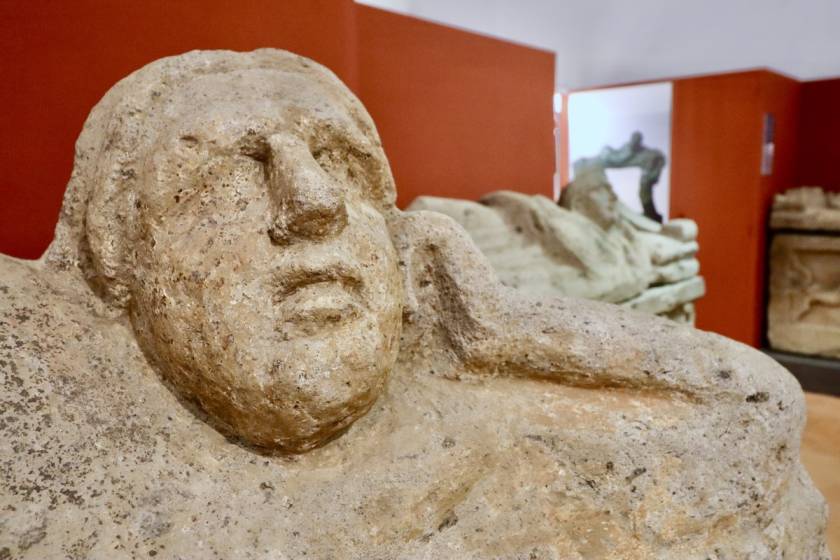 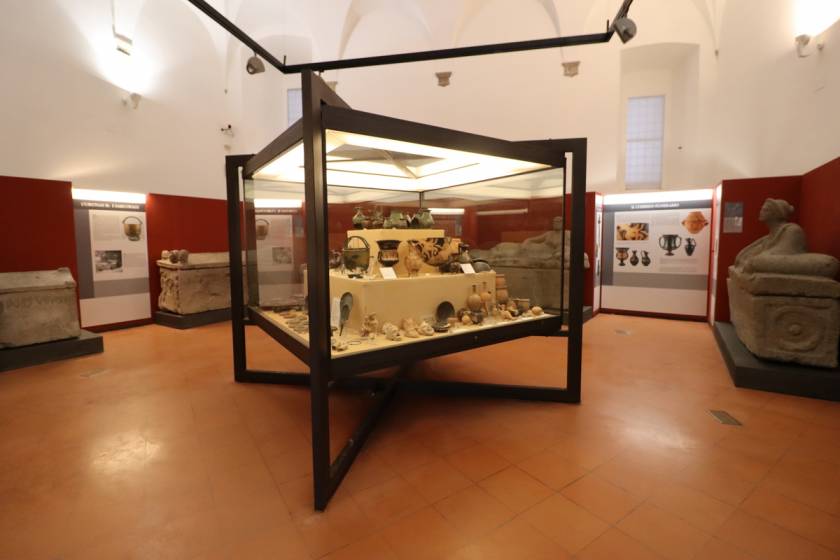 On the hill at the end of the walk outside the walls is the church of Santa Maria del Riposo and the former Franciscan convent, now used as the National Etruscan Museum. The Benedictine church was rebuilt in Renaissance style at the end of the 15th century, when it was occupied by the Carmelite fathers, and completed between 1495 and 1522. It is rich in 16th-century paintings. It contains an altar polyptych, attributed to a certain Maestro Pellegrino, divided into four parts: three upper lunettes, the left side of which depicts the Announcing Angel, the right side the Madonna and in the centre the Eternal Father.
The first band depicts in the central painting Mary in Glory and in the side ones the Saints Martyrs Secondiano, Veriano and Marcelliano, patrons of Tuscania.
The second band has a painting of St. John the Baptist on the left side and St. Francis on the right. In the central niche, which perhaps once housed the tabernacle, is a painting of the Madonna and Child by Antonio del Massaro, known as Pastura. At the base of the polyptych, a series of panels of fine workmanship narrate some biblical events from the story of Jesus. The three side altars contain three altarpieces by Scalabrino da Pistoia depicting the Adoration of the Shepherds, the Visit of the Magi and the Deposition from the Cross. In the chapel on the left is the remaining part of a large panel depicting the Presentation of Mary in the Temple, attributed to Girolamo Sermoneta known as Siciolante. There are other fine frescoes in the niches of the side altars, including a beautiful Nativity of Jesus. Behind the high altar is a magnificent 16th century wooden choir. The convent was built in its present form in the 16th century; the frescoes in the cloister date from the 17th century and narrate the earthly deeds and miracles of St Francis of Assisi in 48 lunettes.
The residential use that took place after the First World War and continued until 1971, resulted in various architectural failures that were largely recovered by a skilful restoration after the earthquake. However, the Museum, which is still in the process of being set up, is nonetheless impressive; it preserves extraordinary Etruscan and Roman burial remains from the area. In the four rooms on the ground floor are exhibits from the Etruscan tombs of the Madonna dell'Olivo necropolis, and Carcarello, which house a sarcophagus belonging to the Curunas family.
an almost complete collection of the sarcophagi and furnishings of the late Etruscan families Curunas and Vipinana, representative of the way of life and customs of this part of Etruria in the 4th and 3rd centuries BC.
The eight rooms on the upper floor (of which only the first three are on display) display the most recent finds from the Necropolis of Pian di Mola, Ara del Tufo and Scalette, with a sample of Etruscan artefacts ranging from the 8th century B.C. to the height of the Roman period; all in showcases with explanatory panels. In a room adjacent to the central hall are the architectural elements of the colonnaded portico tomb of Pian di Mola and an audio-visual display explaining the historical architectural typology of the tomb itself. A considerable number of clay sarcophagi and furnishings, not excluding numerous pieces of medieval ceramics, await placement in the remaining rooms. On the subject of the museum, it is worth mentioning what was considered the first Etruscan museum in history, that is, the installation made by Vincenzo Campanari (an archaeologist from Tuscany in the mid-19th century) in the garden of his own home. Having obtained permission from the Pope to recover archaeological finds from the excavations, Campanari, with his own findings, reconstructed, among other things, the Vipinana tomb discovered in Carcarello, placing the sarcophagi and furnishings as they had been discovered. Some scholars of the time appreciated this display criterion, unlike the one used in the Vatican Gregorian Museum, which was strongly criticised for lacking a functional chronological criterion.
*** Translated with www.DeepL.com/Translator (free version) *** 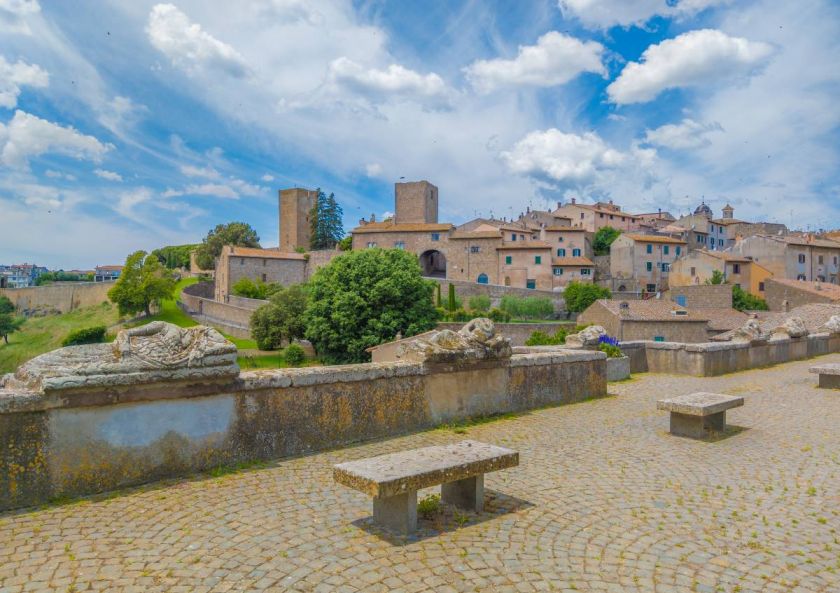