What to see in Ortigia, Siracusa, Sicily 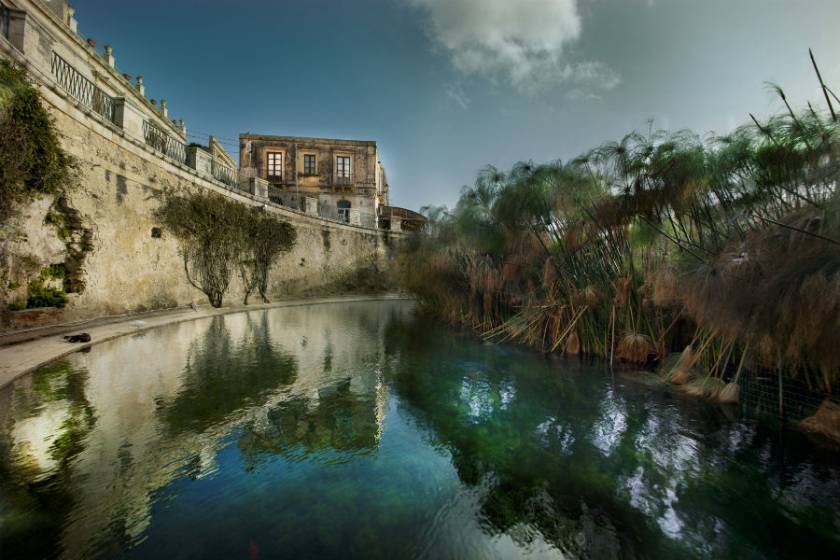 the Aretusa Fount of Ortigia Island has its origin in the development of one of the many ground water outlets located in Syracuse, the aquifer that also supplies the river Ciane on the opposite side of the port. It has a circular double, with inside a circular structure, or a double concentric circle. In Fonte Aretusa is acclimatized to the legend of Aretusa and Alfeo, one of the biggest myths fascinating of Syracuse.

Over the centuries the source has undergone various transformations; first outside the boundary of the fortifications, was possible accedevi from the sea through a steep staircase where there was also a door, where they appear to have penetrated the Romans during the conquest of the city. In the sixteenth century the source was divided into more rivoli used for the tanning of hides and skins: The Rivoli formed a lake of about 200 meters in diameter. In 1540 the source was incorporated to the fortifications when Charles V strengthened military structures of Ortigia, to be released in 1847 when the invaded it assumed the current form. The belvedere place next to the source is what remains of the ancient bastion, demolished in the second half of the XIX century the Fonte Aretusa is up to now the heart of Ortigia, meeting place and walk repeatedly subtracted from the risk of drainage. Several earthquakes over the centuries have threatened the secular inflow of water, until a few years ago when the drought and perhaps even the construction of the third bridge, have reduced the flow of water at source by putting at risk the health of the papyrus, which grows inside the puddle. The papirus wood of Siracusa, and that of the River Fiumefreddo, are the only two papirus woods in whole Europe.

VIA GIUSEPPE CAMPAILLA SNC, 96010 , Palazzolo Acreide (Siracusa)
33.10 Kilometers from Aretusa Fount
Borgo Albergo
You will sleep in one of the six houses of the village provided to guests thanks to a project of ...