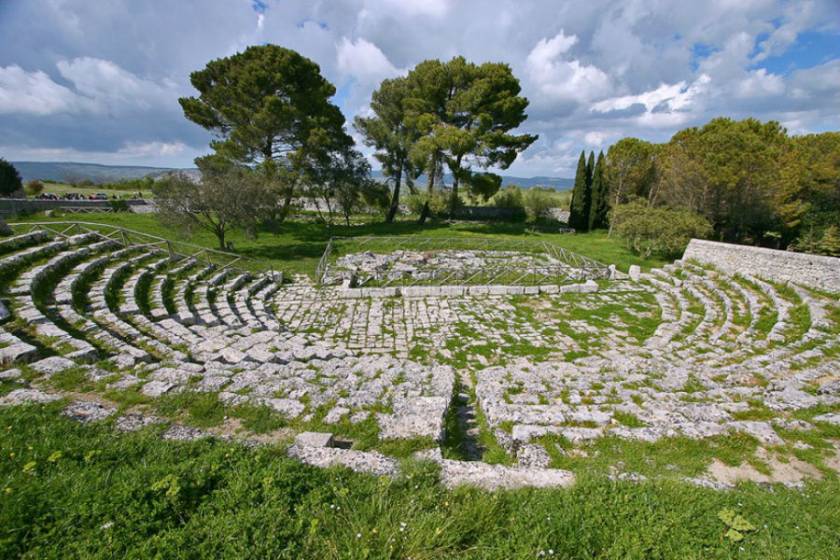 According to Thucydides’ information, the ancient location of Akrai was chosen the Corinthian settlers to be built around 664/663 b. C., 70 years after foundation of Syracuse. Beside, the territory of Akrai was already inhabited during the prehistoric age. It is likely that in 827 a. C.
Akrai had been destroyed by the fury of the Arabic army of Aserd Ibn Al Forat, sharing thus the fate of other 98 Sicilian towns. Owing to this event the population, scattered for many years in the countryside, moned dynamically to the town, first to the southem part of the Acre Mount, the today’s St. Paul area.

THE THEATRE
The theatre is the most outstanding monument in the archaeological area of Akrai, called by the Hellenist Ettore Romagnoli the theatre of the sky for the peculiar impression of hanging – between the sky and the earth – that gives to the visitor, besides the exceptional view on the Anapo valley and on the horizon on the Etna Vulcan. Although the exact era when it was constructed is unknown, it seems plausible that it dates back to the time of Hieron II, therefore around the second half of the III century b. C. The Koilon, uncovered by Gabriele Judica in 1824, rested on natural slope which faces northwards, consisting of 8 step, 9 wedges and 12 row of seating, for a total 700 places. The little dimension of it explains the reason why it does not exist the diazoma. Differently from the other Greek theatres this one is not bigger than a semicircle, and mostly the two faces of the koilon don’t converge, as in any other ancient theatre, but diverge, which by far we hardly can find in any other ancient theatres. Another peculiarity, which makes the Akrai theatre unique, is the shape of the orchestra, which is a semicircle rather than a perfect circle and makes the scene seems incredible advanced compared to the usual classic standards. The existence of a narrow tunnel which links the theatre to the bouleuterion in the western side, is an uncommon construction and whose function has never been fully explained. The theatre was without the paradoi, in place of them there were two front doors beside the scene facing the koilon. The proskenion front was lined up on the wings end of the koilon a stylobate is still quite visible, made up of a course of squared blocks with 14 cavities. During the Roman age, such as many others Greek theatres, it underwent numerous alterations. On the scene are quite evident the remains of Byzantine mill.

THE APHRODITE’S TEMPLE
The Aphrodite Temple uncovered by Gabriele Judica thanks to a finding ogf an ancient inscription, known as Kaibel 217. this fact allowed the scholars to assert than in the ancient akrai there were 3 temples; the Aphrodision, consecrated to Venus, the love and beauty goddess, the Artemision, consecrated to Diane, the hunting goddess and Koreion, consecrated to Persephone, goddess of the agriculture. The most important of these temples, built around the IV century b.C., was no doubt, the Aphrodision, not only because of the location. It was in the middle of the Akrai sacral acropolis, in the highest part of the site, but also, as from discovered inscriptions. The priest of the temple was also the eponymous magistrate, that is to say the deputy to name the year. According to the reliable reconstruction offered by Bernabò Brea, the temple, located above the theatre, was made up of 6 Doric columns at the front and 13 on both sides for total of m. 18,30 for 39,50. It was a middle-size temple, not as big as temples in Syracuse.

THE BOULEUTERION
The Bouleuterion, uncovered around 1820 by the enthusiastic search of Gabriele Judica, was methodically studies in 1944 by the archaeologist Luigi Bernabò Brea. Initially mistaken for an odeon even by Paolo Orsi the true nature of it was uncovered by the German scholar Heinrich Bulle, the bouleuterion was a meeting place for the city’s senate (Boulè). It was considered of a koilon with a small semicircular orchestra facing westwards, six rows of seat divided in three wedges with two small steps for the total number of hundred seats. The building was probably connected to public facilities such as the agorà.

ROAD AXIS
The extremely interesting city road system attracted the attention of experts for its particularities. The main axis platea or decuman, connecting the two city gates, cut across the populated area from east to west and off this flowed small arteries stenopoi heading north/south. The main road, fitted with a splendid and well preserved lava paving, is on average, four metres wide and with intermittent spaces of about twenty-five metres, was crossed over by smeller not paved side streets. Thosa small streets did not cross the main road squarely, but diagonally because of, according to some scholars, the need of tempering the strong wind in the area.

THE STONE QUARRIES
In the archaeological park of Akrai there are big stone quarries. The Intagliata is the biggest latomia. It was accessed through a door which is still clearly visible, situated under the theatre. Inside this quarry there are hypogea and arcosolium burial grounds from the Christian Age.
The Intagliatella, whose northern part was called Via Sacra, is characterised by a series of votive niches, tombs from various eras as well as houses from Byzantine era. The aspect which characterises most this area and monopolizes the attention of the visitors as well as the experts, is the existence of a descriptive bas-relief (approx 2,13 x 0,83 m). it represents, to the left, a sacrificial scene, to the right a banquet of the heroes and, at the centre, the figure of a roman warrior, whose role was the junction of two patterns, in the process of making a propitiatory or thanksgiving sacrifice.

Via Necropoli Grotticelle, 25, Siracusa (Siracusa)
33.97 Kilometers from Akrai
= distances as the crow flies