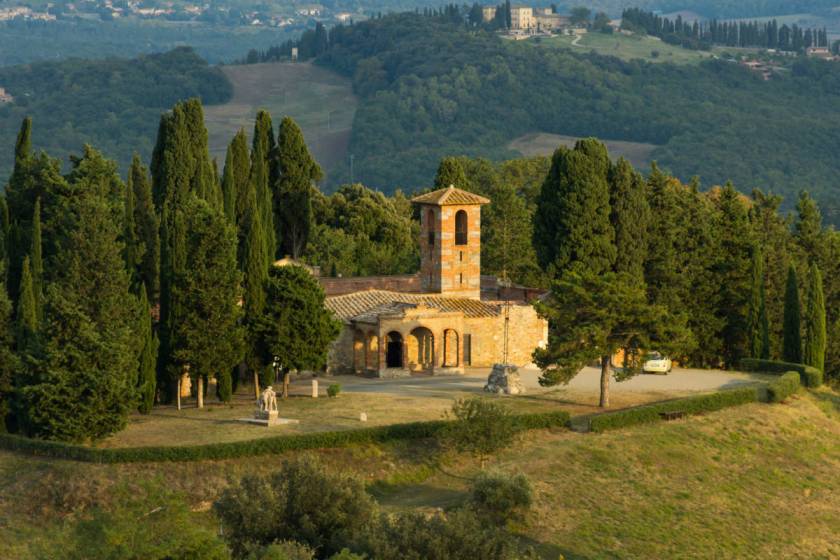 The Church of San Niccolò rises a few hundred meters from the center of Casole and is currently used as a cemetery chapel.
The church is the result of the reconstruction of the crypt of the Collegiate Church of Casole where it was located until the thirteenth century, when the church was transformed into a Gothic style.

There is a processional cross dating back to the thirteenth century and also a fresco adorning a tomb, found at the beginning of the twentieth century, and this suggests that the church was immediately used as a cemetery chapel; the cemetery is located in an area already used for Etruscan burials.
The interior consists of an apsidal transept covered with cross vaults divided into five naves separated from each other by round arches resting on columns. The most extreme naves are limited to a single span and form an arm of the transept each; in the resulting space two semicircular apses are inserted into the masonry and invisible on the outside. The central chapel is circumscribed by two arches resting on ungulated capitals, with leafy decorations, and on half-columns whose bases are very similar to those of the abbey in Isola. The central naves are separated by four columns which are also very similar to those of the curved surface of the apse.

Strada Provinciale di Pieve a Salti , Buonconvento (Siena)
44.26 Kilometers from Church of San Niccolò
Lupaia
An agritourism resort in the heart of Tuscany, between Pienza Montepulciano. La Lupaia is a luxur...