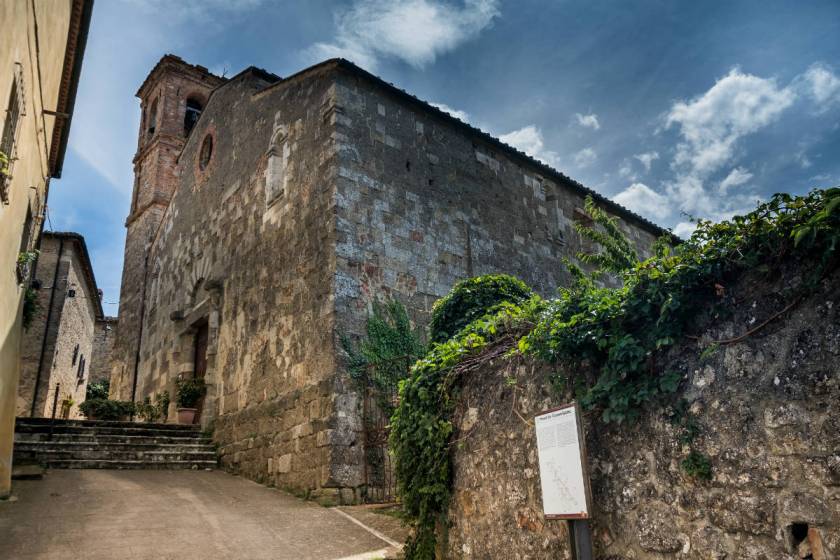 The parish church of San Giovanni Battista is a Catholic place of worship located in the small hamlet of Mensano, in the municipality of Casole d'Elsa.
The church, perfectly oriented, has a basilica structure with three naves with as many apses and a wooden roof. The masonry was carried out with massive limestone and conglomerate segments arranged in horizontal and parallel courses.
The salient facade has a gabled profile thanks to the fact that the side aisles are slightly lower than the central one. The masonry consists of a use of marble and sandstone which give an almost spotted appearance; in the center there is the portal inserted between two two-tone half-columns completed by abacuses carved in stiacciato. The crescent-shaped arch was made with alternating light and dark stone ashlars and is surmounted by a monolithic lunette resting on an architrave resulting from a remake; the piers have bases carved in rings, now irreparably worn out, and shelves decorated with geometric motifs.
The interior with three naves is divided into five bays, the last of which forms the presbytery separated from the rest of the hall by three transverse arches that form a sort of triumphal arch. The half-columns of these arches all rest on three-ring bases as in the abbey of Isola.
The greatest value of the interior are the fourteen capitals, some of which attributed to the Pisan master Bonamico, which have similarities with two of his works placed in the Pisan Camposanto.
Note also the Romanesque stone baptismal font. On the left wall, next to the portal that gives access to the ex-company, there is a fresco of the school of Ambrogio Lorenzetti, depicting a saint lying in the sepulcher. From the presbytery an architraved portal leads into the sacristy.