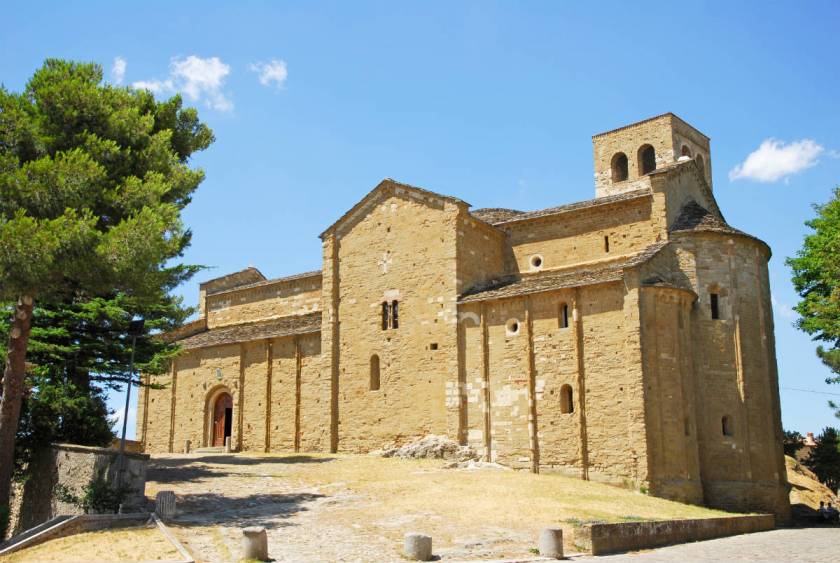 the site on which rises the St. Leo's Cathedral, a protuberance of the rock, was dedicated to the religious cult of divinity since prehistoric times. The building of the first medieval cathedral was in the VII century, when the ancient Montefeltro (San Leo) was erected a civitas, becoming the seat of a diocese.

The remains of the first church are incorporated into the present structure Romanesque Lombard-. There are also numerous fragments of sculptures such as the ruins of the ciborium of San Leone, capitals with phytomorphic motifs and the winged lions of the porch, which support a column of the nave. On a pillar of the central nave, between two heads ovoid, is engraved with the date 1173, probably referring to an intervention of restructuring of maestranze guided by capomastri emiliano-Lombardi.

In ancient times, the cathedral was not in an isolated position but flanked by Palazzo Vescovile, from the seat of the canons, guest quarters, hospital, the sacristy and very probably from the baptistery. These buildings, from the tower to the parish, became for many centuries the district cathedral, a religious citadel call the Bishopric, probably fortified. With the restructuring of the post-Tridentine, operated in the XVI century, the floor was arranged, rather than in two planes at different heights, for a single plane. In the same period date back even the balustrade that encloses the presbytery and the staircase, style Urbino. The entire structure has numerous elements asymmetric. The entrance is located on a side rather than on the facade, situated on a steep rocky slope. The portal is surmounted by a sculpted busts depicting San Leo and San Valentino, coming from the ancient church. One of San Leone is the oldest depiction of the Holy received to our days. As most of the buildings in San Leo also the Cathedral is devoid of foundation as rests directly on the rock. In it are also dug two staircases that lead to the crypt. The numerous single and double-lancet windows have strombature.

The plan of the church is a latin cross with three aisles divided by pillars in the beam and columns which support arches broken, hinting at the forthcoming gothic style. Each pillar and each column is decorated at the level of the Capitello by bas-reliefs depicting animals of the so-called Christian Bestiary, which symbolize the vices and virtues. There are also the fish, a symbol of Christ, different styling of the Tree of Life and the figures of men and women, to exalt the human activity. For dimensions emerge telamons and caryatids, which in the center of the nave and the presbytery are countered in a symmetrical manner. In the Duomo are inserted, without a precise order, rocchi of roman columns of marble, four of which, embellished by Corinthian capitals, alternate with pillars in the naves and the presbytery, testifying to the presence of buildings of the Roman era in loco.

The crypt contains the same architectural features of the church above with a greater homogeneity in the Romanesque style, causing it to be the oldest part of the complex, with round arches, vaults, columns and cruciform pillars. The light comes from small windows with double flaring. A peculiarity lies in the fact to be dedicated to Saint Peter, whose title is widespread among the most ancient churches of the area, making assume that the crypt itself is the result of the restructuring of a previous temple, perhaps an abbey. On the altar is a relic of Saint Leo, donated in 1953 by the Community of Voghenza, which preserves in a shrine the relics from 1016. At the bottom of the crypt, in a niche, is the cover of the sarcophagus of the Saint, dating back to the V century, a typical example of Roman sarcophagus.

Via Gemmano, 1050 - 47834, Montefiore Conca (Rimini)
20.95 Kilometers from St. Leo's Cathedral
Agriturismo Il Sentiero
Located in the middle of the hills of Montefiore Conca.