The Sanctuary of Santa Maria in Monte Penice

What to see in Bobbio, Piacenza, Emilia-Romagna 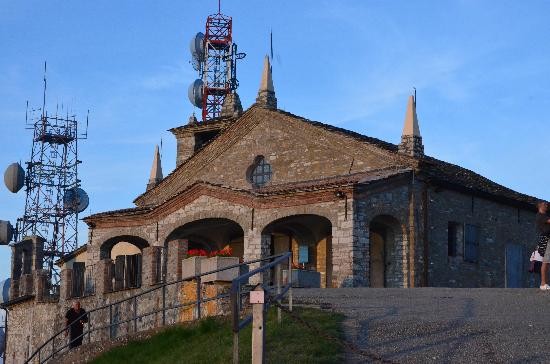 Place in a particularly panoramic point, from its large square you can enjoy a wide view not only on the Trebbia Valley and the Staffora valley, but on the whole of the territory of Emilia and pavese and special days are visible even the snowy Alps. The summit of Monte Penice is reachable by means of a long road about 4 km, which rises from the Passo del Penice at 1149 m. On this peak the Madonna is venerated by more than 1350 years, for a promise made by Saint Columban to the queen of the Longobards Teodolinda in the VII century. By sovereign Longobards the Holy Irish missionary had the territory on which he founded in 614 the abbey of San Colombano. It seems that the building was built on a pagan temple celtic-ligure. Inside you can admire the precious wooden statue of the Virgin with the Child in the womb that dates back to the period between the end of 1500 and the beginning of 1600. The feast day of the Shrine and of the Madonna of the Penice takes place on the day of the dedication to the Most Holy Name of Mary, celebrated by ancient date in the second Sunday of September. Then there is the procession in the night of August, illuminated by torches, from Passo del Penice up to the summit to celebrate the feast of Our Lady of the Assumption. In the winter period the sanctuary is accessible only on foot, the road is closed to traffic because of snowfall.

località Roncassi, Menconico (Pavia)
2.88 Kilometers from The Sanctuary of Santa Maria in Monte Penice
Locanda Le Cicale
Modern inn, shop and wine-tasting from ancient origins, great for a refreshment or for tasty moments

Via Caneto, Castell'Arquato (Piacenza)
45.22 Kilometers from The Sanctuary of Santa Maria in Monte Penice
Casa Benna
From the end of 90’s onward, continuous improvements have been made with regard to vineyard culti...