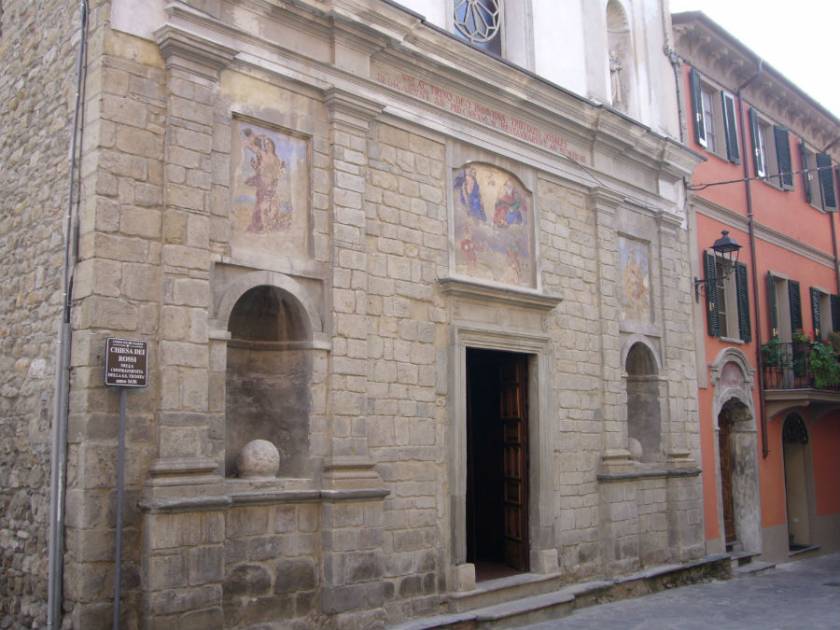 the Reds' Church is located in the midst of the homes which constituted the primitive nucleus of the town of Varzi, built after the constitution, in 1275, of Malaspina Marquisate, this construction is the ruins of the ancient tradition of religiosity, of taste and creativity that the area still today preserves. The church dates back to 1636. It is so named because here they gathered the Confraternity of SS. The Trinity, from the characteristic red cape worn by their confreres.

From an architectural point of view is an original example, and to a certain extent, the anticipator of the eighteenth century style Lombardo. Its plan with a structure with a single nave is a common example in Oltrepò. Of valuable, Inside, there is a wooden statue of the Guardian Angel, of 1684, author Antonio Perico from Milan, indorata by Ambrose Giussano from Pavia, which in its simple beauty attracts even before all else the visitor. Other important works are the choir in walnut wood in "Style fifteenth century", a beautiful "letturino", already the subject of art exhibitions in the Diocese, and the furniture in the sacristy, also in walnut wood.

Via San Nicola 11, Bobbio (Piacenza)
16.17 Kilometers from Reds' Church
Bar Pasticceria Davico
The pastry's war-horse are the brioches filled with handmade creams with special flavours such as...

Piazza Duomo 10, Bobbio (Piacenza)
16.31 Kilometers from Reds' Church
Bocù – Bottegacucina
BOCU’, in the village of Garbagna, is a restaurant with daily culinary proposals, inspired by the...