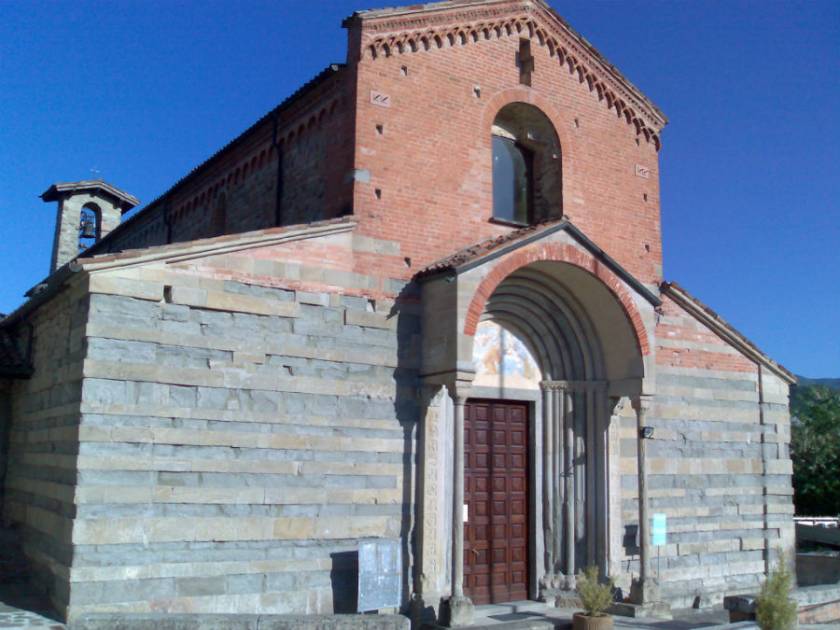 the Capuchins' Church of Varzi was built on a pre-existing parish church, which dates back to the V century. The current church marks the passage from the Romanesque age to the gothic. In the first part of the nave, starting from semipilastri of composite section, whose capitals were carved and are therefore illegible, develop arches a double ring in brick; the north, to the center of the inner ring nut, toward the central nave, includes a relief with four-legged head down. These arches fall on circular pillars with attiche bases; the subsequent ones are a simple ring, bricklaying with hewn in stone inserted in the key and the kidneys. The pair of supports that follows is of rectangular cross section and a simple base. On each side there is then the sequence of two arches to double ring in stone; resting on the pillars which are distinguished by their bases with figured inserts. The last bay, finally, has ring in stone, but more wide of the preceding; supports at this you make complex section and the capitals are à crochets, typically Gothic, as well as the triumphal arch acute sixth. The presbyterial area,modified according to stylistic Gothic, was originally a body equipped with semicircular apses, as testified by the traces during the work of the seventies.

Even the facade bears witness to this composite nature. The Prospectus has a profile with highlights, in which the lower part, in stone masonry listed, differs markedly from the top, bricklaying, for technique and materials used. The upper portion of the facade is decorated with a frieze interwoven arches, rampant and acute sixth, with corbels mostly geometric decorations or with human protomi; if for the lower portions can propose a dating in the context of the XII century, this crown is certainly belongs to a step chronologically more advanced.

Remains of frescoes are located on the triumphal arch. From the typical position of Madonna with head reclining on one side and the arms crossed, we can deduce that the subject represented is The Annunciation. The expression of the face of the Virgin and the presence of objects in perspective let us think that the fragment is of age at the rear with respect to the construction. On completion of the work can be seen still fragments outside the main subject. This is a simple decoration, with the remains of a strip of braided rows, which constitute the frame. It has a chromatism very strong (lit red alternately with the yellow ochre) that probably strongly permeated the whole work.

Via San Nicola 11, Bobbio (Piacenza)
16.82 Kilometers from Capuchins' Church
Bar Pasticceria Davico
The pastry's war-horse are the brioches filled with handmade creams with special flavours such as...