What to see in Montecosaro, Macerata, Marche 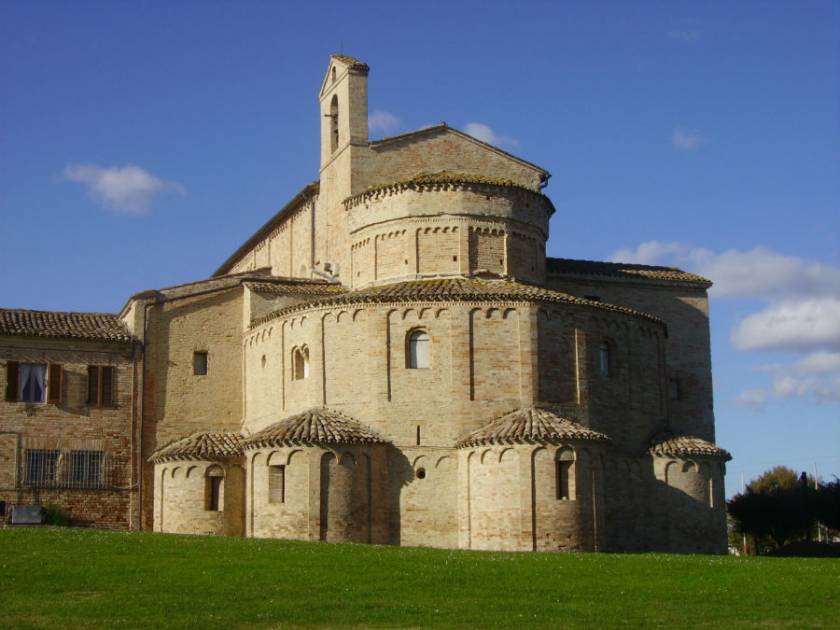 The church was built in its current configuration in 1125 but of the cards of the known Abbey of Farfa, that they depended on the friars who founded, speak of this church already from the year 936. Was part of a monastic complex, built on a building already exists as evidenced by two bodies a square plan which are located to the north and south of the great current building. The Benedictine monks of Farfa who have come here to reclaim the marshy plain, potenziarono subsequently with an enclosure wall of protection for the periodic flooding and the Saracen invasions that were by the river. To its inside, in time, found shelter even small homes and shops, and thus the complex became a center of trade and the seat of the famous fair of 25 March.

The building has undergone over the centuries various rearrangements, of which the most radical and significant is that of the XII century. We can imagine that in that period began this rehash important that EC delivery with its existing large shapes. Other important works were carried out in successive centuries and particularly at the beginning of the Fifteenth Century, when it was painted the fresco cycle with episodes of the infancy of Jesus: on all dominates the imposing figure and ieratica of Christ Pantocrator, inserted in a "almond".

The building has an architectural form very original in Italy, that we can bring to the pilgrimage churches of French style Borgognone. In fact has a basilica with three naves, where the central one is wider and high covered by a trussed roof, built entirely in brick. Is closed by two semicircular apses superimposed where the base, largest, has three elegant radial chapels.

In Italy the Santissima Annunziata of Montecosaro is one of only five plants equipped with choir with ambulatory and radially of the absidiole, architectural digit of the Churches mtas in so far as they allowed the transit of the faithful of the passage that lied and prayed in chapels without disturbing the sacred collective functions that took place in the central part. Elongated with the apses on the east and with a verticality very slender especially the nave that anciently proposed free of clutter and supported by the women's gallery that is elevated above the lateral naves covered with cross vaults, then with a structure similar to the great French cathedrals as the now disappeared Cluny III.

The entrance of the church has a endonartece the width of the central nave with the floor at a lower height with respect to the external surface of the building. The elevation of the Church presents mackerel and simple tripartite by some slender pilasters reflecting the internal order. Has two rectangular windows in line with the side naves lower and higher, so in total four and two other rectangular windows in line in the central part of the central nave. Its realization is, according to some, very back to the realization of the body of the Church and has undergone various restoration initiatives. Is traced back to the Seventeenth or Eighteenth century, for other historians still first.